In God's hands: I stood in front of an advancing 240-foot glacier and lived to blog about it.

Skip a few paragraphs down to June 4, 2011, for my account of my visit to the Perito Moreno Glacier at Parque Nacional Los Glaciares, just outside of El Calafate, Argentina.  I’ve included the two days prior for my own personal record.
June 2, 2011. I took the day off to recuperate from the 6-day/5-night trek in Torres del Paine and to catch up on some blog entries at the hostel where I was staying, Hospedaje Nancy.
June 3, 2011. The same people who were on the bus with me to go to Parque Nacional Torres del Paine were on the same bus to El Calafate, Argentina.  It was David, the Australian, the two French couples, William & Gaelle, Philippe & Corinne, and I.  We left at 7:30 am and arrived shortly after noon in El Calafate.  Except for William and Gaelle who stayed at another hostel, we all ended up at the same hostel, America del Sur. 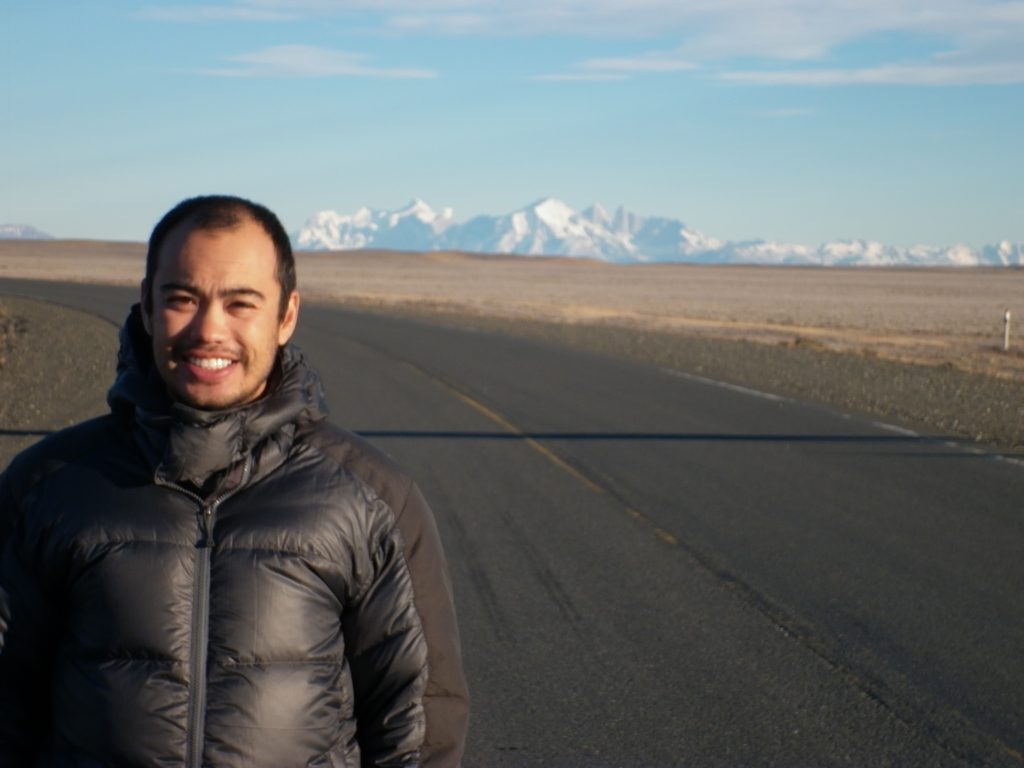 On the road from Puerto Natales, Chile, to El Calafate, Argentina

This hostel was nice.  The floors were heated, which we didn’t find out until after the first night when the bar of chocolate that was in one of Philippe & Corinne’s bags had melted!  We hung out at the hostel the entire day.  I cooked up a steak with some instant mashed potatoes.  David had the big bbq which the hostel was offering for, I think, 60 Argentine pesos (15 USD).  The French cooked up some pasta, drank wine, and had dessert.  I’m always impressed by the dietary habits of the French.  Their meals are either very simple or very elaborate.  Personally, I am so low maintenance that I can get by just fine eating slop.  But the meals that the French eat, whether very simple or elaborate, always have a touch of elegance to them. 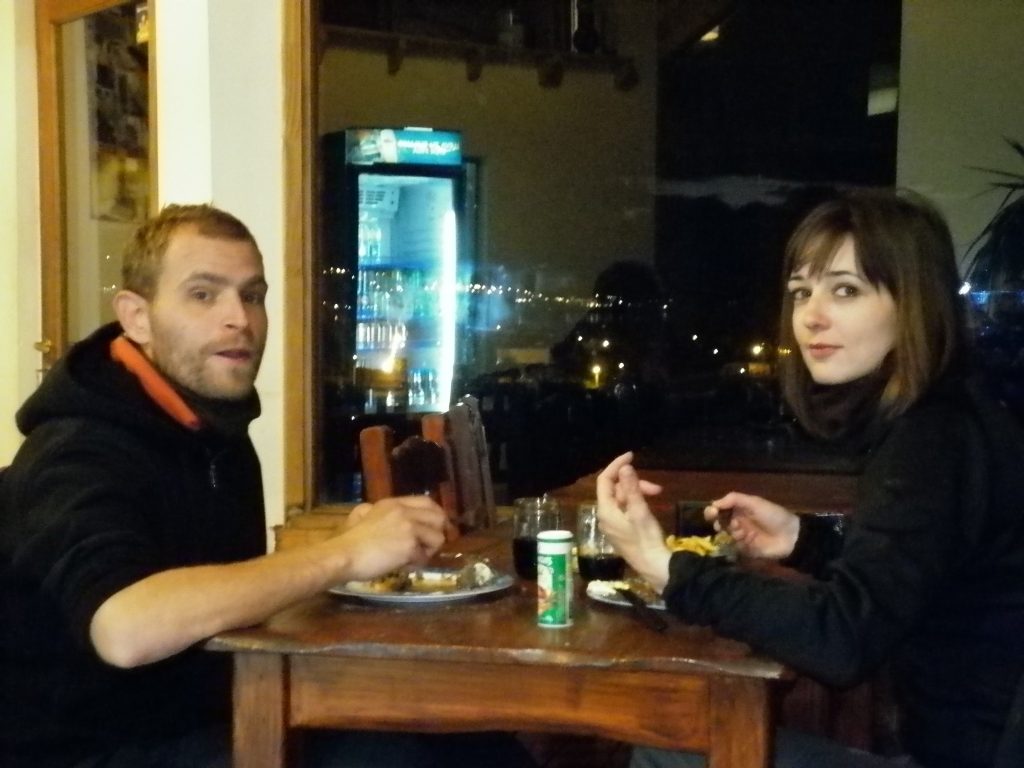 Philippe and Corinne with their "elegant" French meal, including wine and dessert. It's a well-known fact that the French diet and cultural attitude about food is far more healthy than that of Americans. We should all aim to eat more like the French. This was taken on the last night that we stayed together in El Calafate, Argentina.

June 4, 2011. We were all up early before sunrise to eat breakfast and take the bus to Parque Nacional Los Glaciares.  With Gaelle and Wiliam with us again, our ad hoc band of six: the Aussie, the two French couples, and me, bought tickets for the 1.5 hour boat tour once we arrived at the park.  We were under the impression that the boat would give us superior views than those to be had from land.
Here are some of the pics: 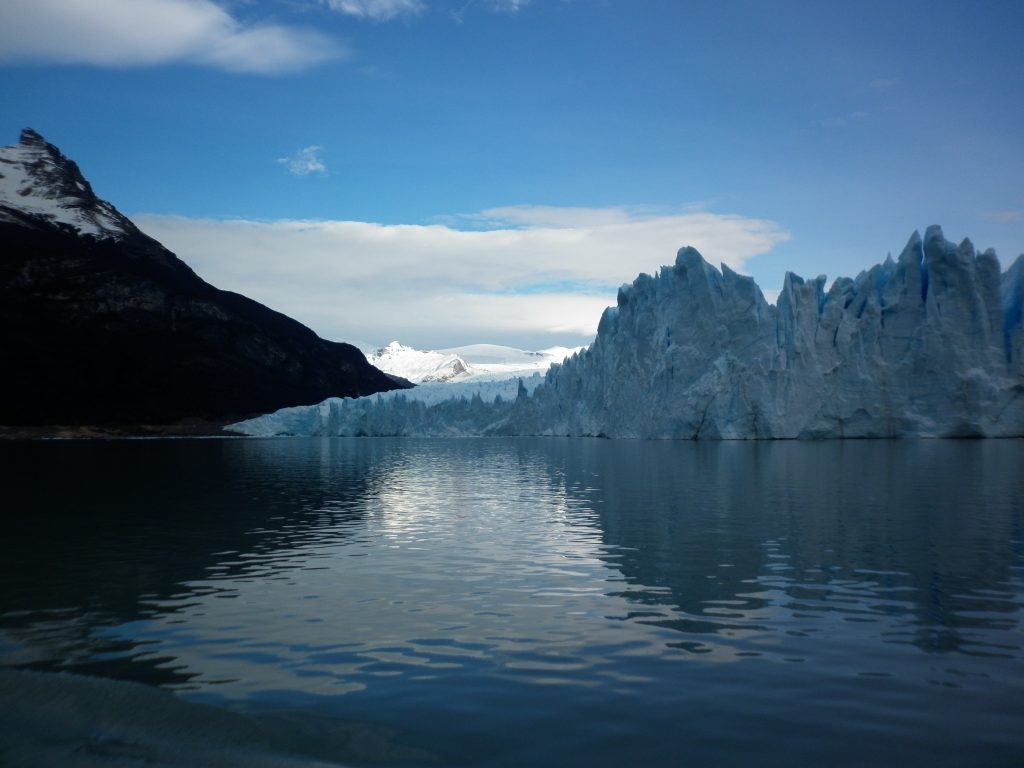 The Perito Moreno Glacier is believed to be one of only three glaciers in the world that is growing. 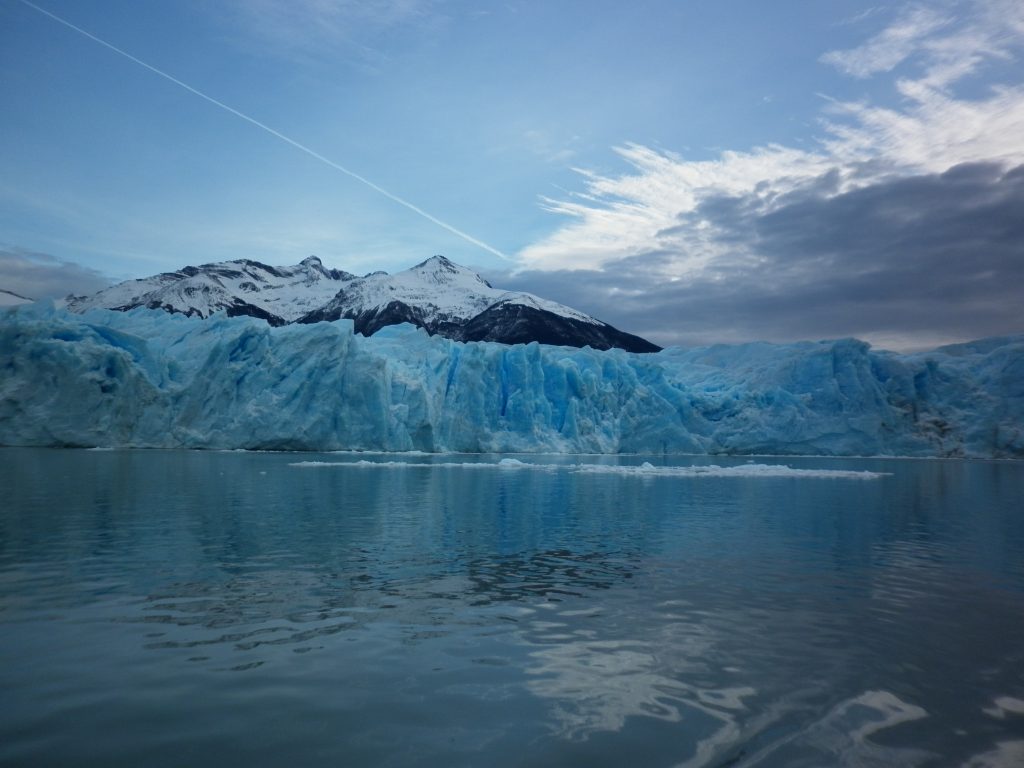 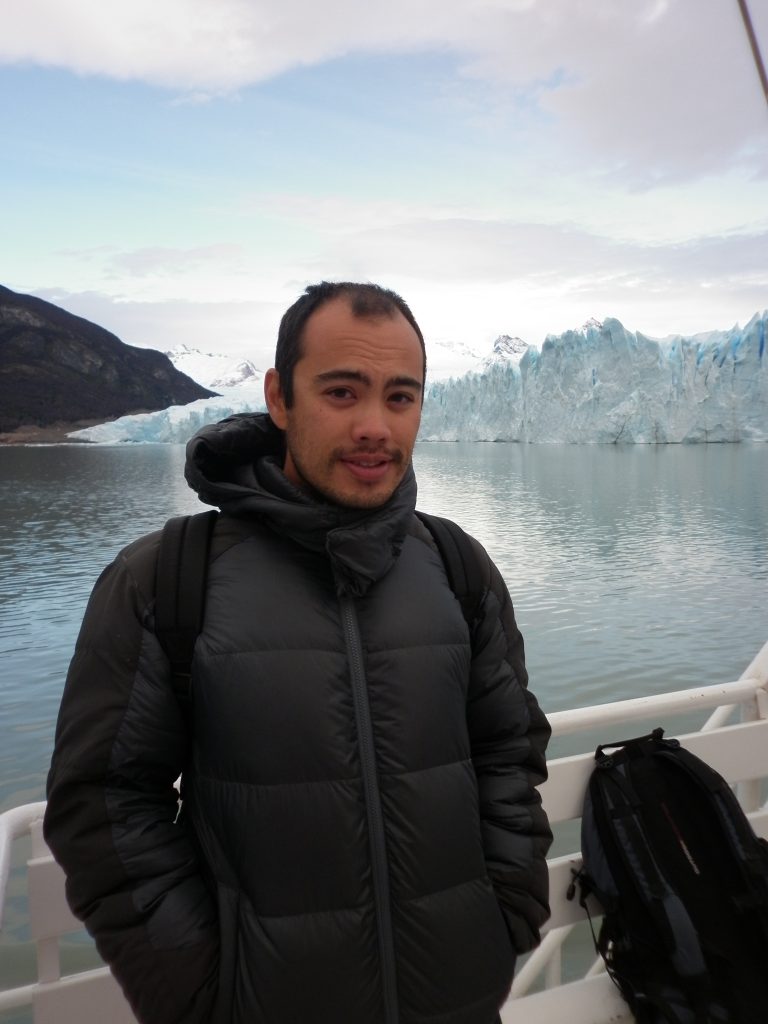 The boat seemed like a good idea at the time... but, wait! Read on! 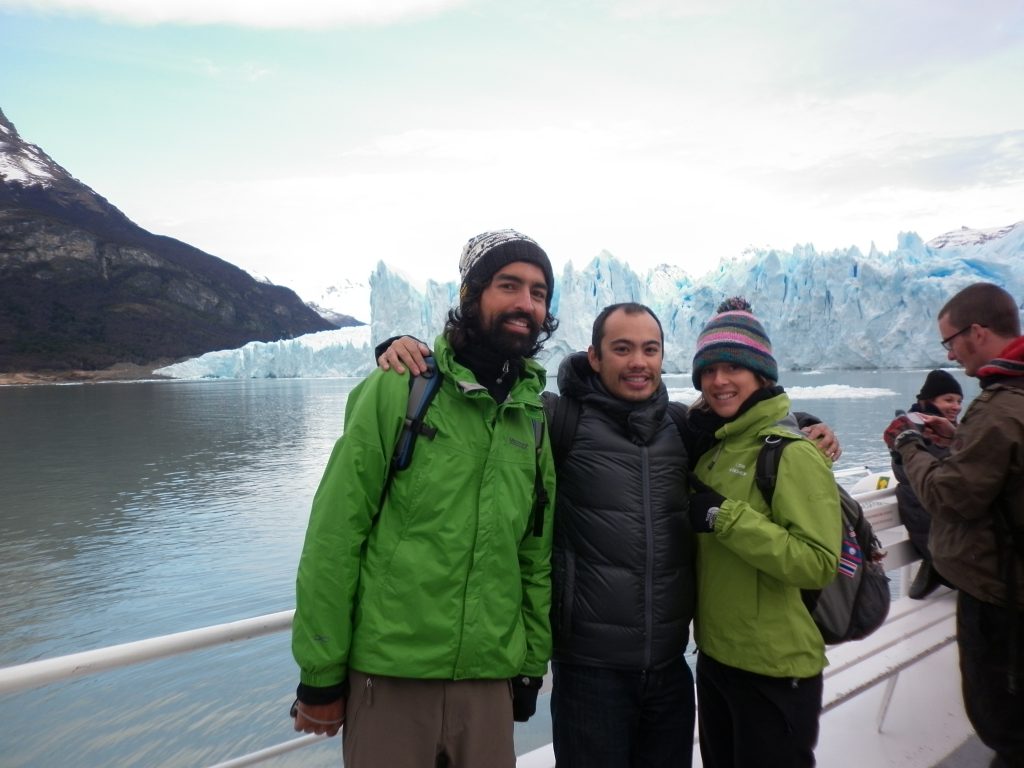 William and Gaelle, from Marseilles, France. Fellow travelers and dear friends. We ended up traveling together for about 19 days, and they are in ALL my pictures from the Patagonia to Buenos Aires!

I wanted to get closer to the glacier.  I mentioned to David, the Australian who I hiked with in Torres del Paine, that we should find a map and see if there was a way we could walk up to the glacier and on it.   After 6-days of backpacking with him in Torres del Paine, I knew him well enough to suspect that either he probably already had the same idea in mind or, if he hadn’t, it wouldn’t take much to convince him.  He agreed immediately.
As soon as we could, we found a map and started walking down towards the glacier.  The park’s infrastructure was very well developed with metal walkways leading to various viewpoints across from the glacier.  David and I descended down as far as we could.  We hopped off the metal walkway, down a steep slope through a small wooded area, and then on to rocks that were directly in front of the glacier. 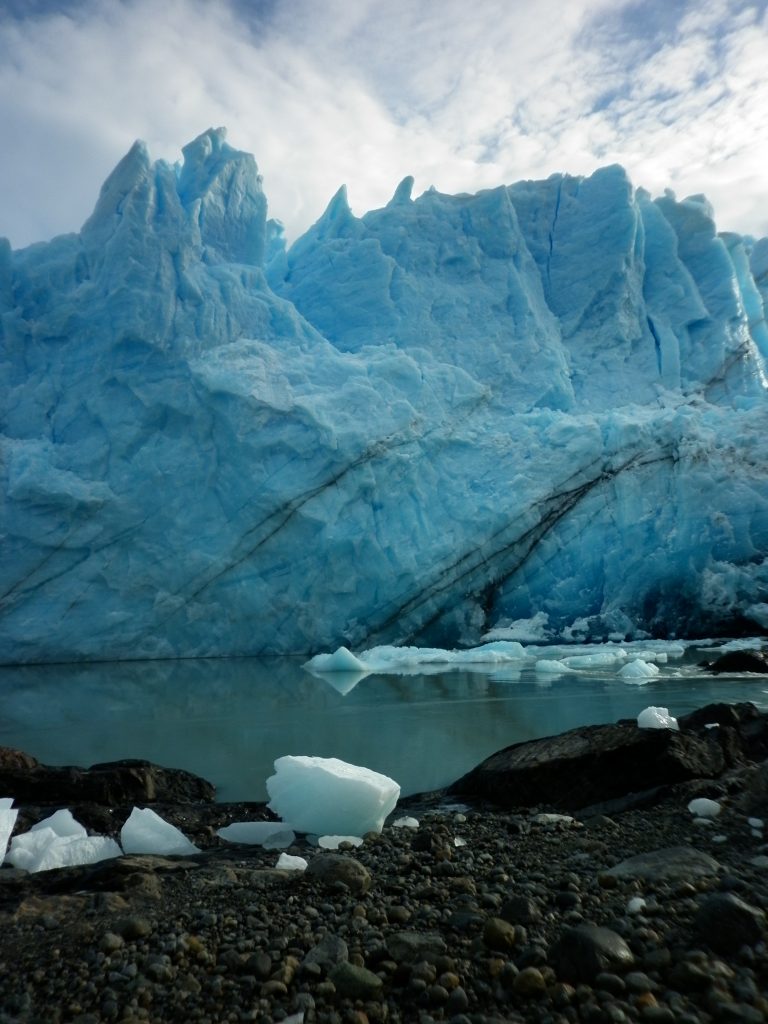 That glacier is the size of a 24-story building!

We walked as close to the edge of the rocks as possible to get as near as possible to the advancing Perito Moreno glacier.  There it towered 240 feet above us!  We knew that between 1968 and 1988, 32 people had been killed by pieces of ice that had fallen and been thrown violently many feet away.  We could hear the ice cracking and we knew that the possibility of meeting the same fate as those 32 dead was very real, evidenced by large chunks of ice all around us. 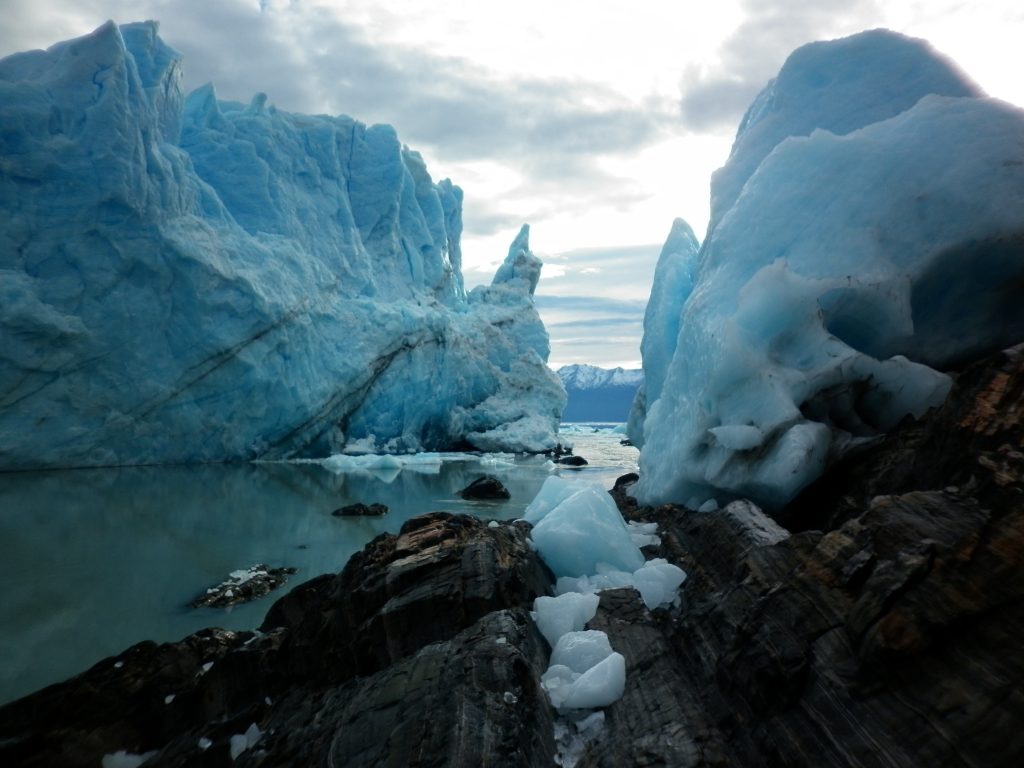 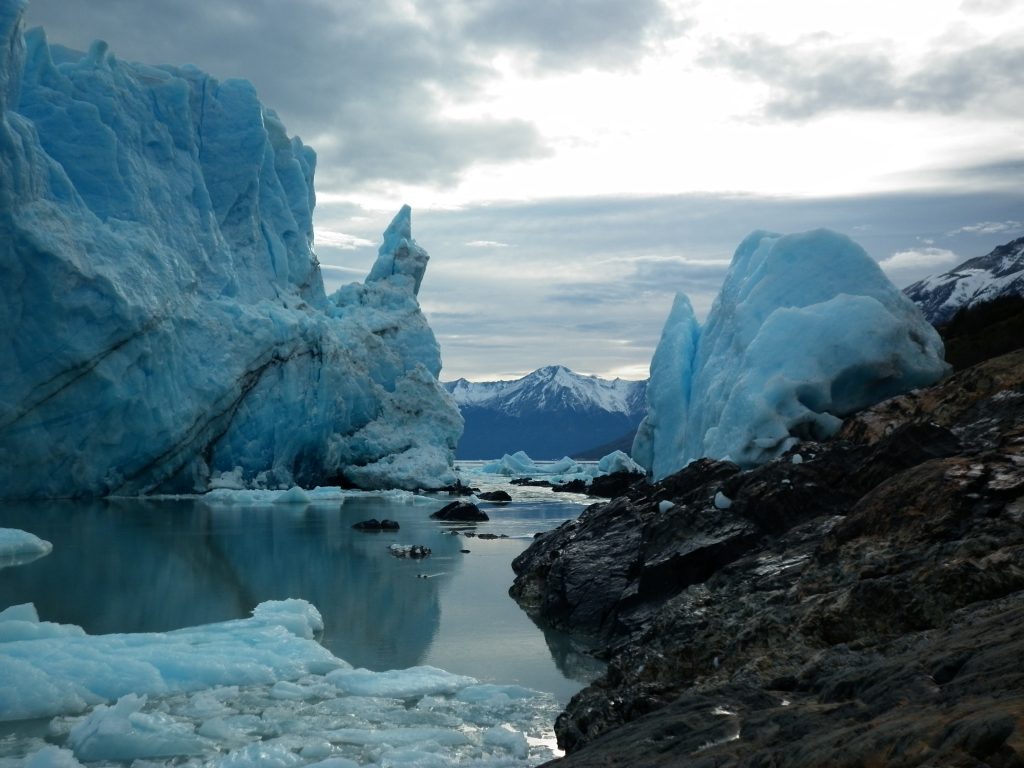 We heard ice falling behind the ice faces that we could see.  We could hear splashes.  We wondered and waited in anticipation to witness ice falling into the water.  It was incredibly exhilarating.  David and I looked up at the cracks in the ice and wondered which one would finally give in to the force of gravity.  We were both scared.  David backed from the rock edge to take cover.  I lingered a little bit longer near the edge before taking some cover and heading to some higher rocks.
Then it happened.  A large piece of ice near the bottom of the glacier broke off and fell into the water with a large splash.  I extended both arms into the air and shouted, “Whooaaa!!!”  I watched the waves approach until they crashed into the rocks below us.  The ice formed a semi-circular pattern on the water’s surface that slowly widened. 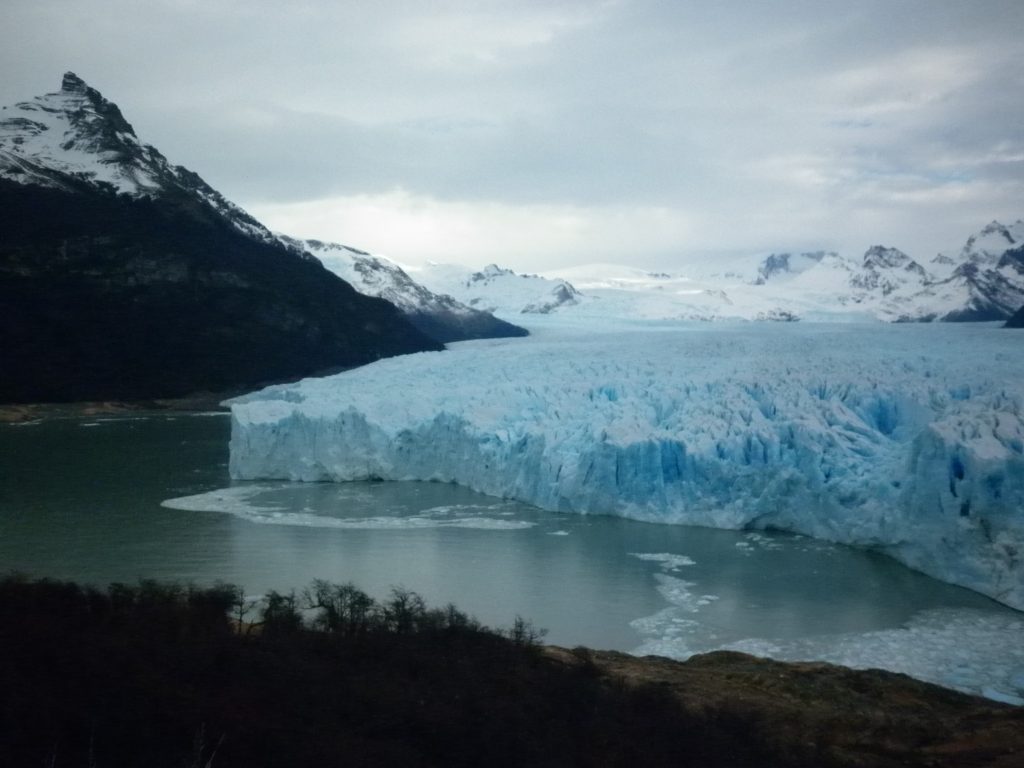 Just like witnessing the avalanche in Valle Frances in Parque Nacional Torres del Paine, this was one of those special moments where I was just awestruck by nature’s forces.  David put it best when he described Parque Nacional Torres del Paine a being “alive.”  Indeed, all of the Patagonia is alive and that’s what makes it so exciting!
This entry was posted in Argentina and tagged Perito Moreno Glacier. Bookmark the permalink.