Buenos Aires is quite possibly the most charming city in all of South America!

June 8, 2011. Gaelle, William, David and I rested all day long.  I had to retire my boots because I had worn the soles so thin that water would leak in through the bottom of them.  I was a little bit sad to retire my boots because they’d been all over the world with me over the years.  I thought maybe I should hold a decommissioning ceremony, perhaps say a few words in their honor and then cremate them.  In the end, I just tossed them in the trash. 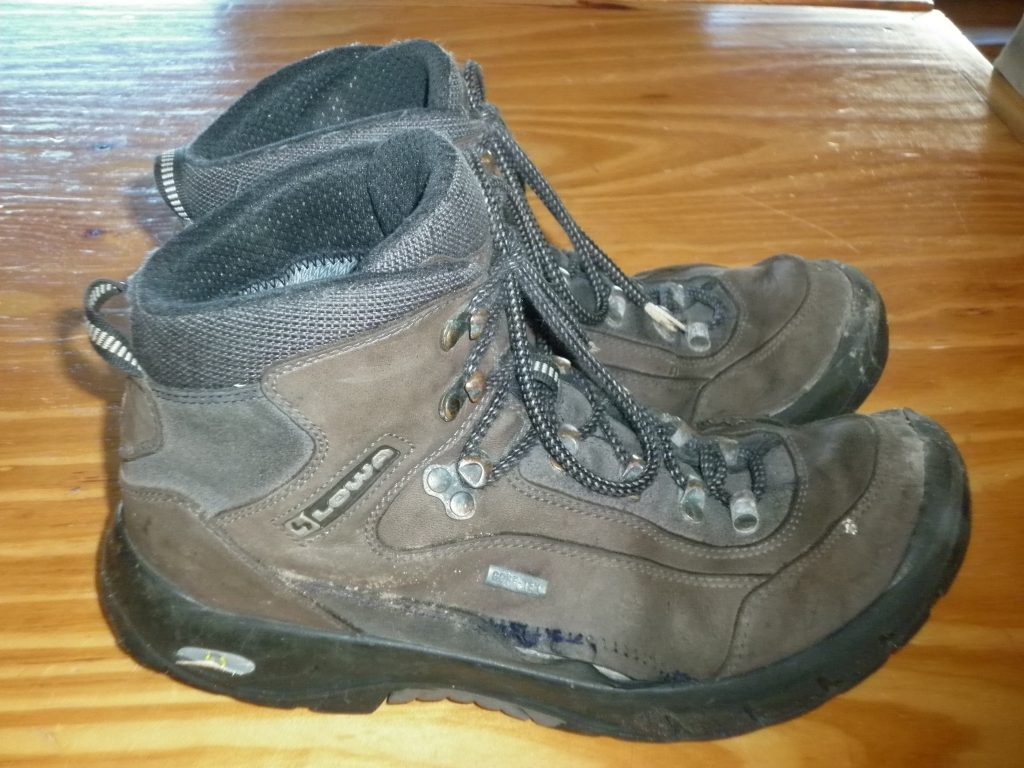 You can see the hole in the side. There were 5 holes in my boots, not including the ones for my feet.

Later in the afternoon, Gaelle, William and I said our goodbyes to David and hopped on a bus to El Calafate to make our journey towards Buenos Aires.  We arrived just in time to buy groceries before the supermarket closed, had dinner, and then went to bed.
June 9, 2011. Gaelle, William, and I inquired about buses to Buenos Aires.  We took the “cama” class, which means “bed” in Spanish.  In reality, the “camas” are just really wide seats with an angled footrest.  It was four hours to Rio Gallegos, a 2 hour wait, and then 38 hours all the way to Buenos Aires. 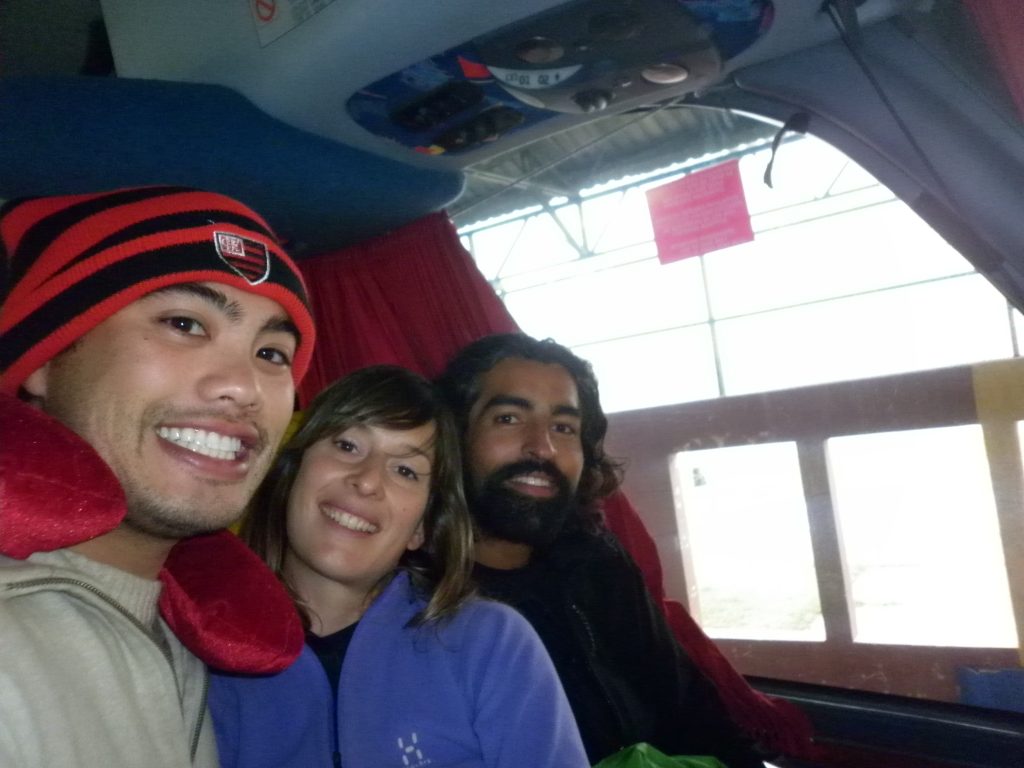 Me, Gaelle, and William embarking on a 42-hour bus journey from El Calafate to Buenos Aires

Food was served and movies were played on the bus.  The movies played were mostly romantic comedies and Pirates of the Caribbean, all in Spanish.  The best movie they played was Fast Five, which I liked because not only was it was set in Rio de Janeiro, Brazil, but it was also in English.
I read my Kindle and connected to the internet whenever we arrived in the towns along the way to drop or pick people up.  The skies between Rio Gallegos and Buenos Aires were grey with ash from the Chilean volcano Puyehue, which had recently erupted.  It was like witnessing a nuclear winter. 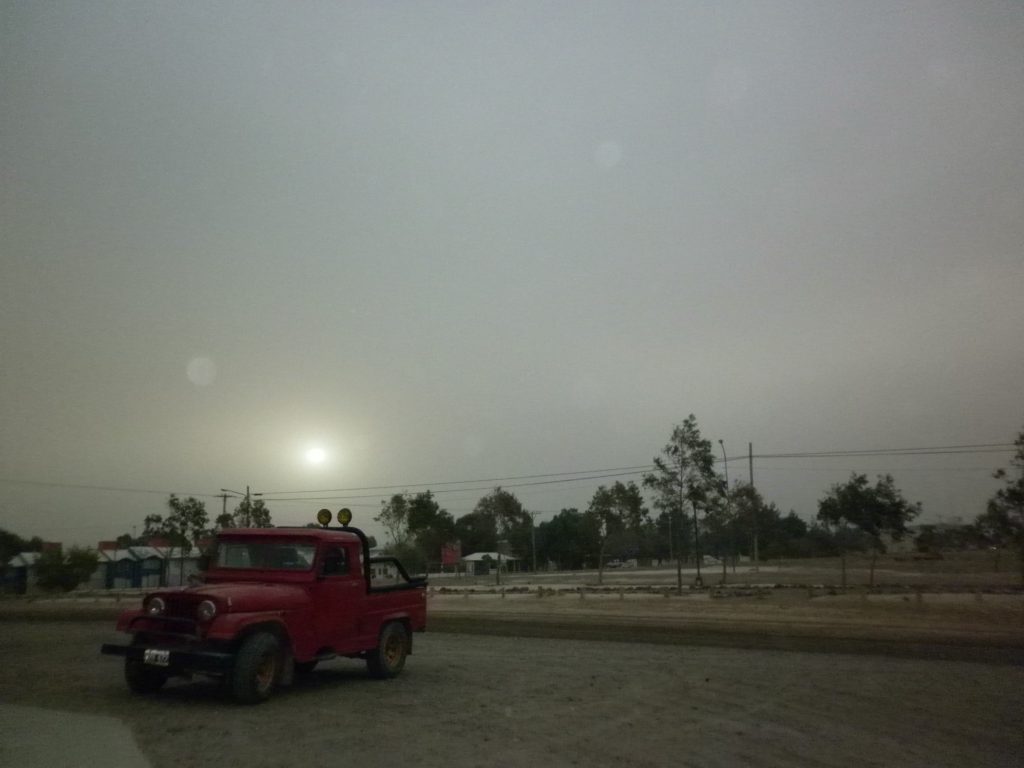 Ashy sky from the eruption of the Puyehue volcano in Chile

June 11, 2011. We finally arrived in Buenos Aires!  Gaelle, William and I parted ways on the metro to go to our respective hostels.  They went to a hostel in the San Telmo neighborhood and I went to a hostel called “Tango Backpackers” in the Palermo neighborhood.  I called up Kayla, the American girl I met in Ancud, Chile, because she lived in Buenos Aires.
We got together at her place and ordered some empanadas to be delivered.  We shared some mate, which was awesome because I had just acquired the taste for the Argentinian drink while I was hiking in El Chalten. 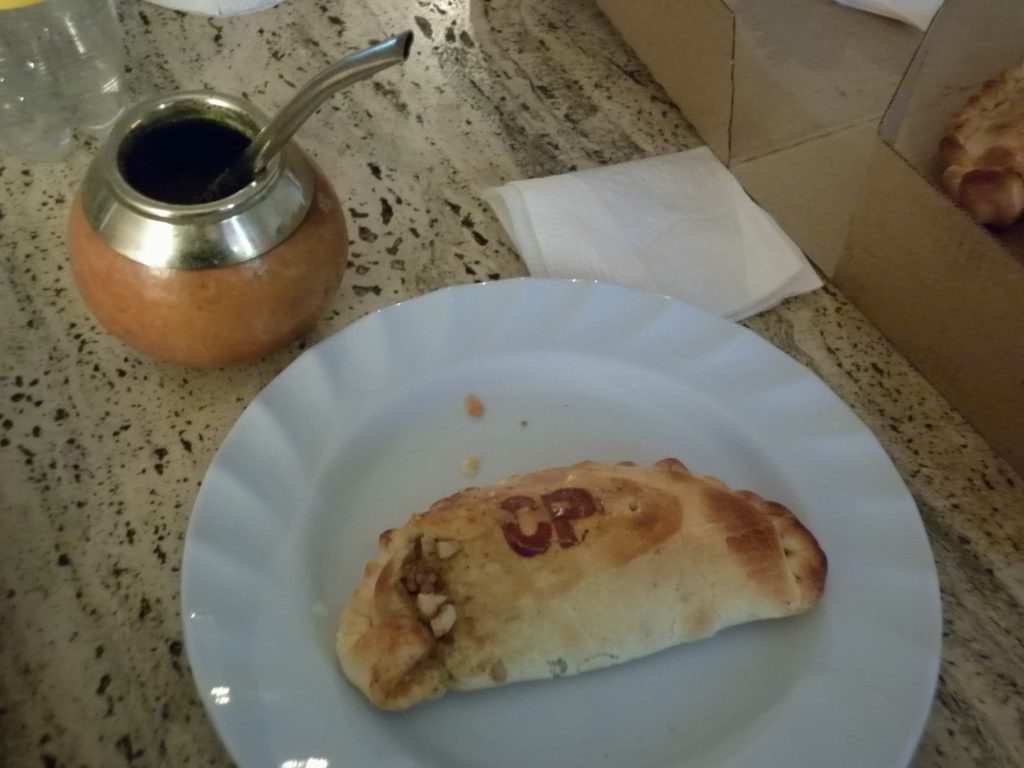 Mate and an empanada. Yum!

After drinking mate and eating empanadas, Kayla and I went for a walk around Palermo.  We stopped to watch a band playing in the park before continuing to get ice cream.  The high-end shops and restaurants reminded me of Georgetown in Washington, D.C. 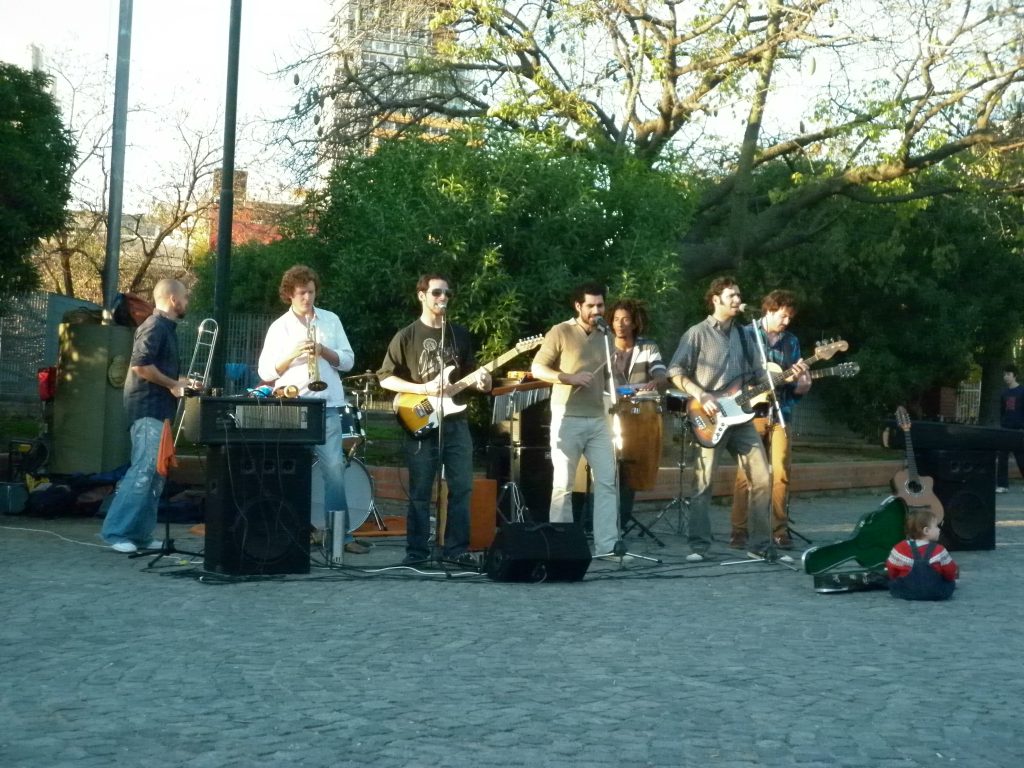 We continued walking around Palermo.  I was really impressed with how up-scale the place seemed to be.
June 12, 2011. Kayla and I walked around San Telmo.  We walked to the Plaza de Mayo, saw the Casa Rosa, saw some tango dancing in the street, and perused through local vendors hawking their wares. 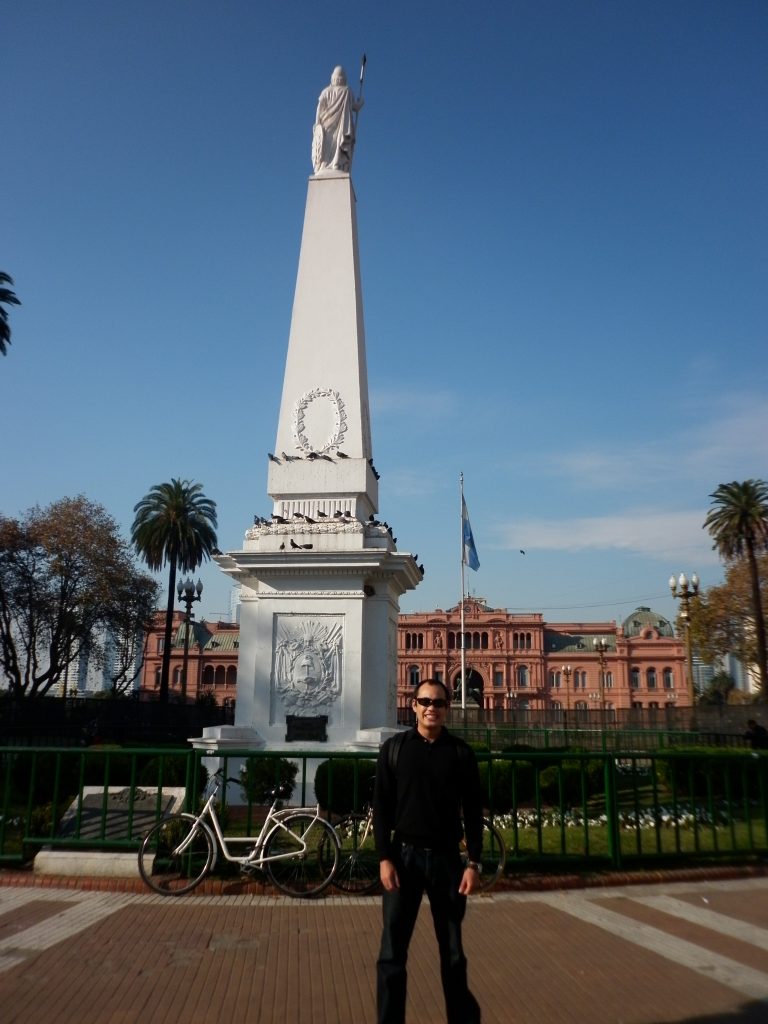 In front of the Casa Rosa in the Plaza de Mayo

Later that night, I got to experience my first Argentinian parrilla, or grilled meat at a restaurant called Las Cabras.  I got the bife de chorizo, a thick sirloin steak grilled rare to perfection.  The steak only cost about 12 USD; with wine and sides, the total cost was about 23 USD.  During my career as a pharmaceutical sales representative, I’ve had the luxury of fine dining in the fanciest restaurants and, in comparison, the parrilla that I had in Buenos Aires offered far more value than any of those fancy restaurants in the US.  Buenos Aires takes first prize for best steak in the entire world! 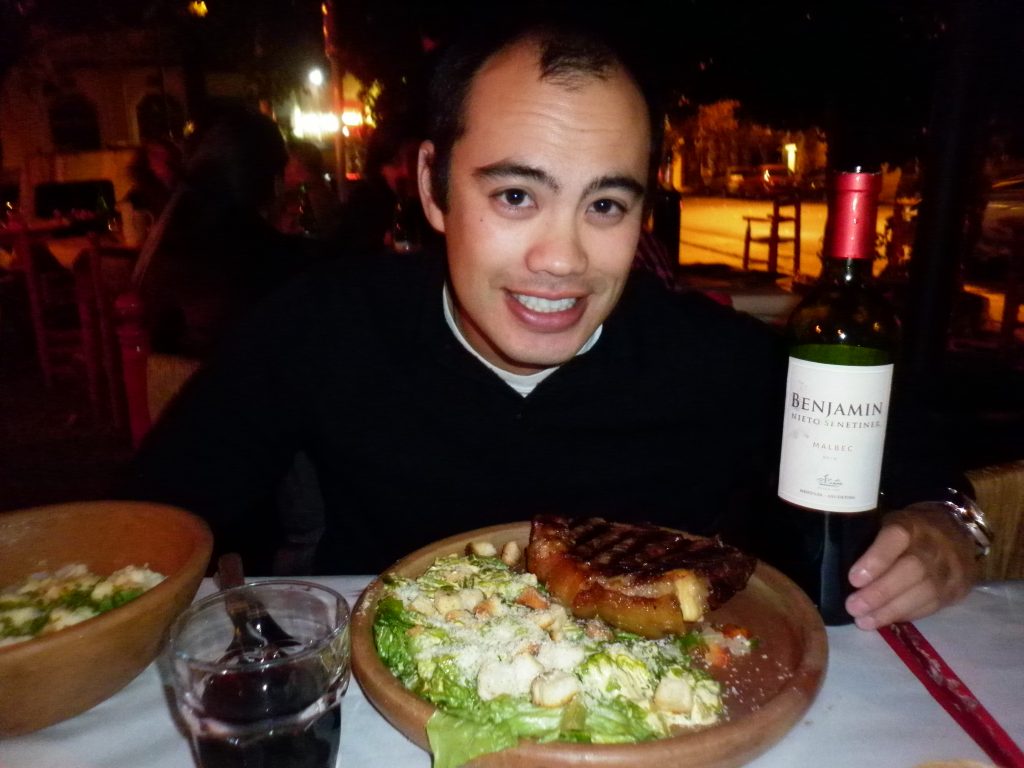 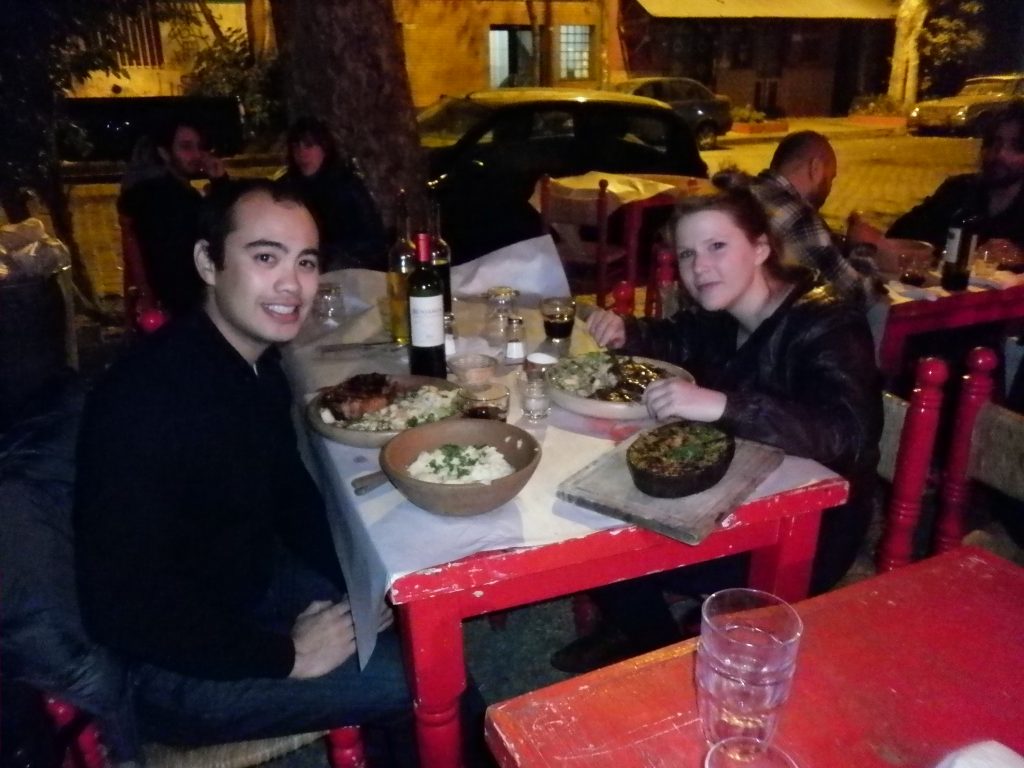 June 13, 2011. I bummed around the hostel all day long.  Later that night, I met up with Sibylle, who I met while hiking in El Chalten.  It’s great to run into fellow travelers a second time!  Even though I knew her for a few days and we had seen each other just a few days earlier, it felt like I was meeting with a long-time friend.  We went out for parrilla, and though I had just had parrilla the night before with Kayla, I didn’t mind.  I love parrilla! 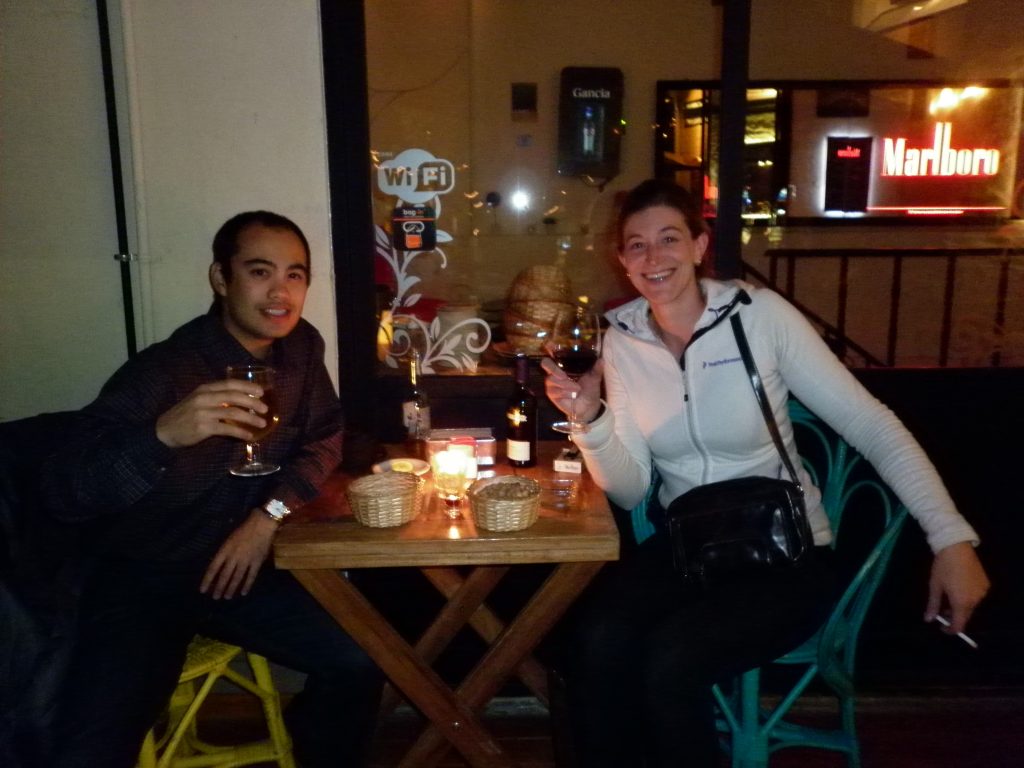 June 14, 2011. I met up with my dear friends from France, William and Gaelle, in San Telmo.  From there we went to visit El Caminito in the neighborhood of La Boca.  The buildings on this street and some of the other streets nearby were very colorful.  There were live tango shows which were really nice to watch. 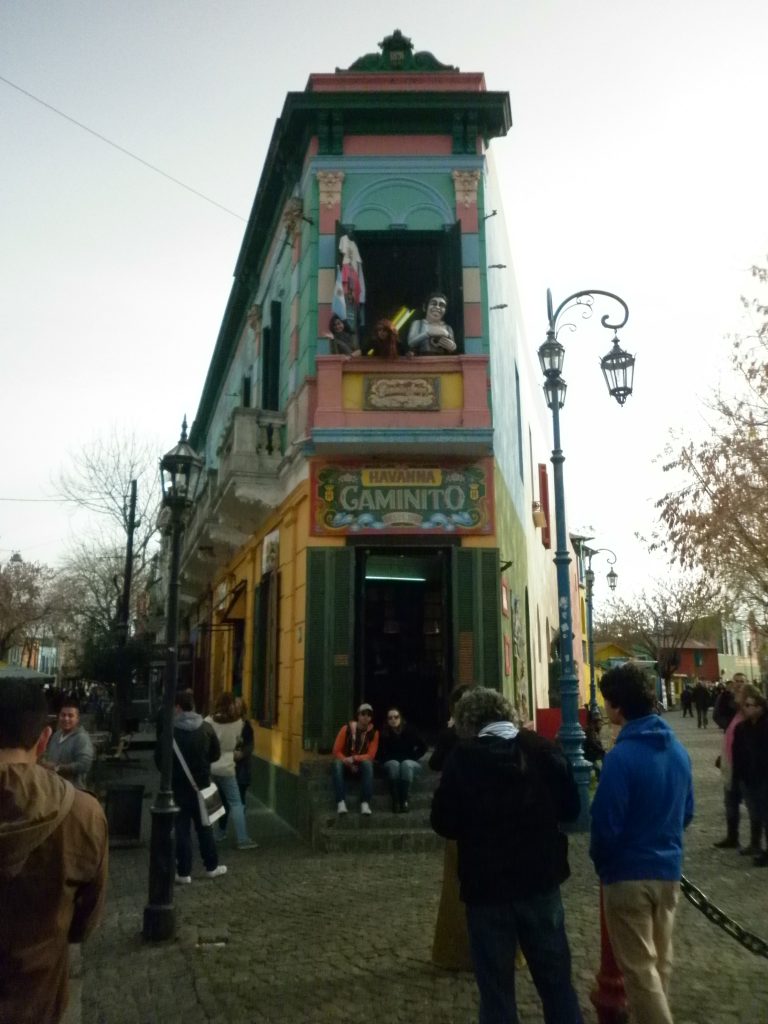 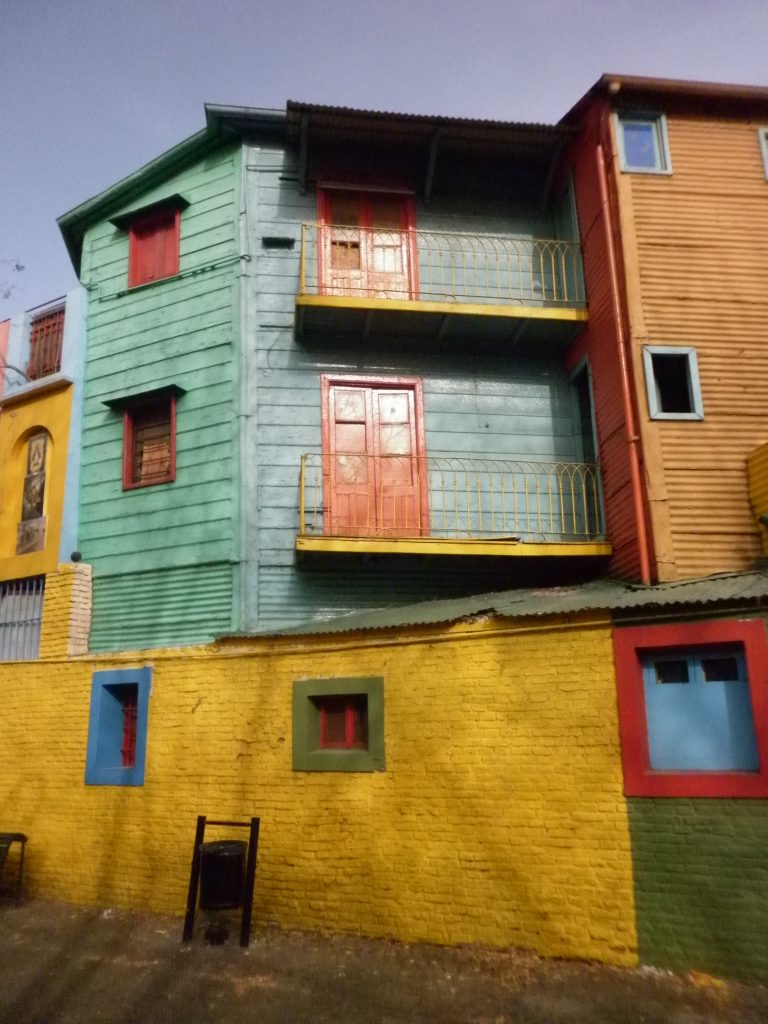 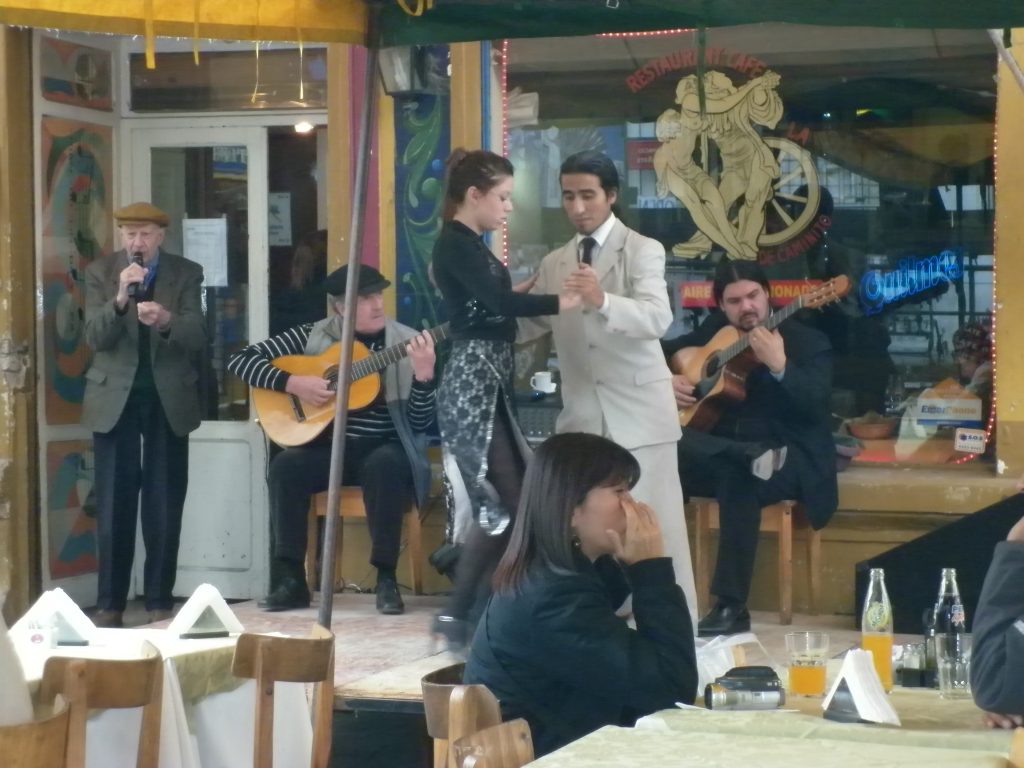 After walking around El Caminito, we went out for dinner.  Afterward, I said goodbye to Gaelle and William since they were leaving town the next day.  Goodbyes aren’t so hard because deep down inside, I’m always optimistic that they’re only temporary until the next encounter.  I might see Gaelle and William again in Bolivia, maybe in Peru, perhaps even in Marseille, France. 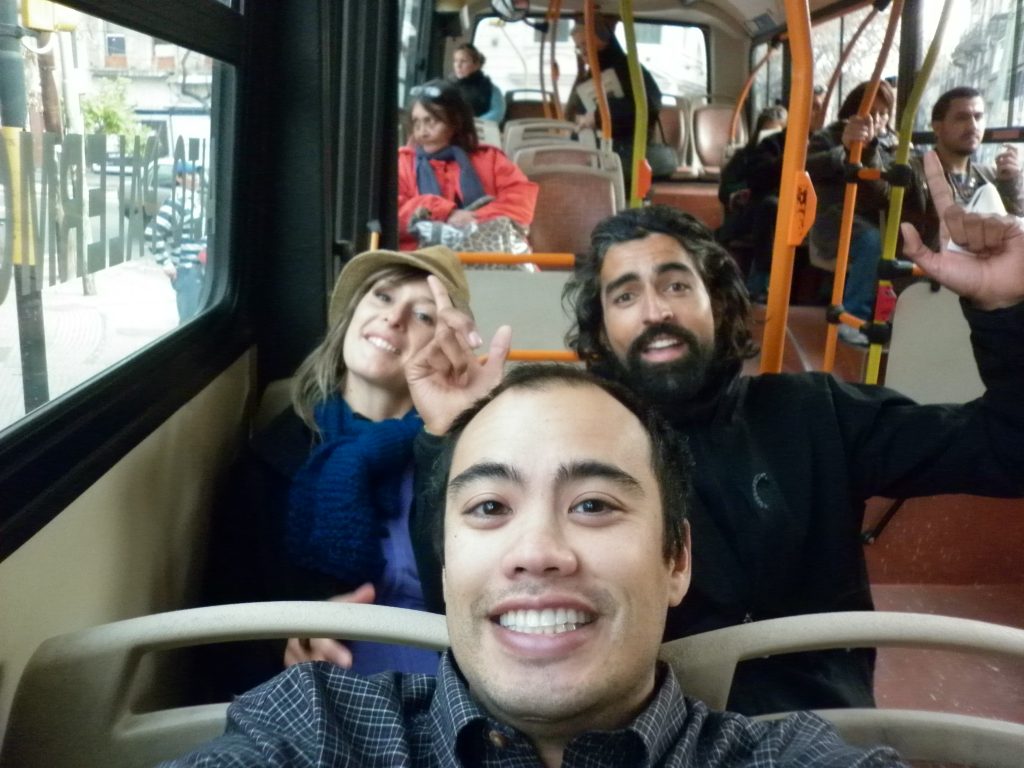 Gaelle, William and I on the bus back from La Boca to San Telmo

Later that night, I joined some other travelers and went to La Catedral in the Almagro neighborhood of Buenos Aires for some tango lessons and dancing.  That was fun and I learned as much as I could in the little time that I had.  There was a live tango band, too! 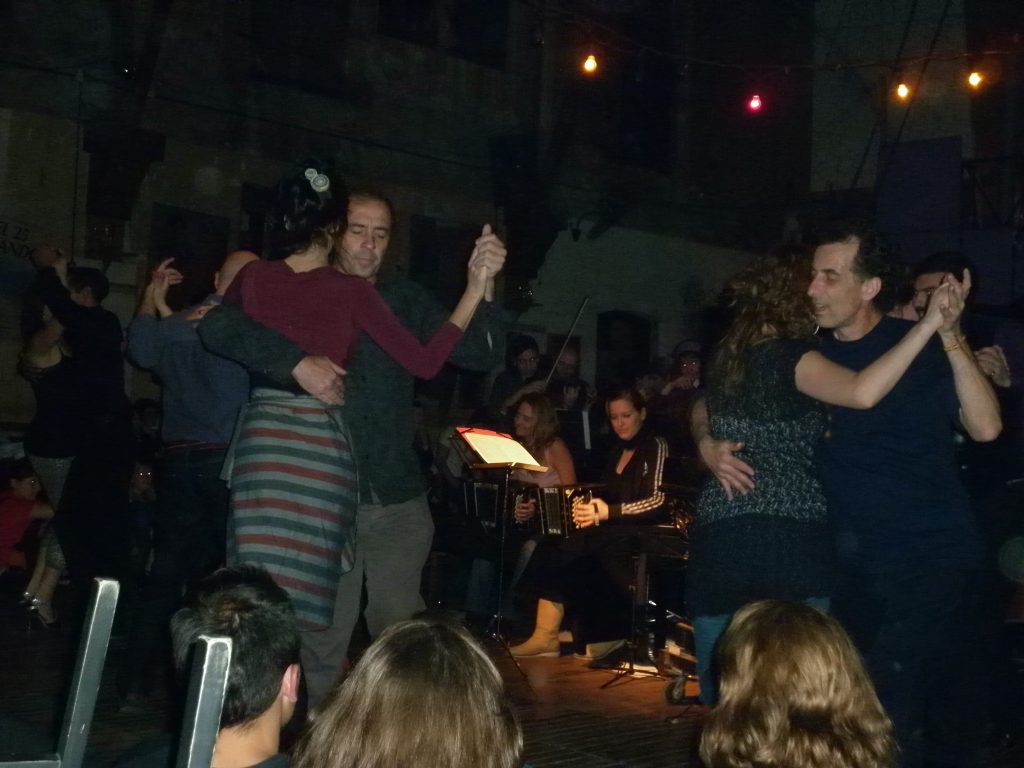 Tango dancing at La Catedral in the Almagro neighborhood 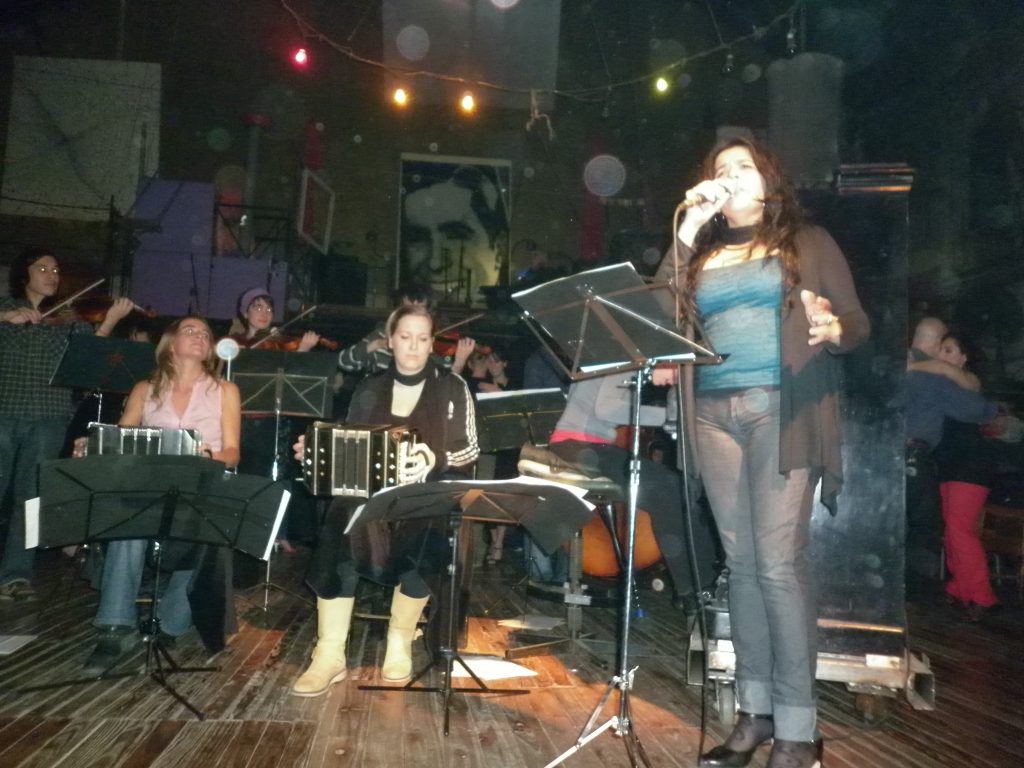 I only got about 4 hours of sleep that night because I was up early the next morning to go to Colonia, Uruguay, for the day.  I’ll write about that in the next post.

June 16, 2011. I went return a textbook via UPS to Chegg in the morning.  Later, I met up with Kayla and we went to McDonald’s because I was craving some gringo food.  She helped me buy my ticket to Puerto Iguazu and we saw the Hangover 2.

June 17, 2011. I went to La Recoleta cemetery, where “Evita” Peron is buried.  The cemetery was really cool.  It’s full of large mausoleums where Buenos Aires more affluent citizens are buried. 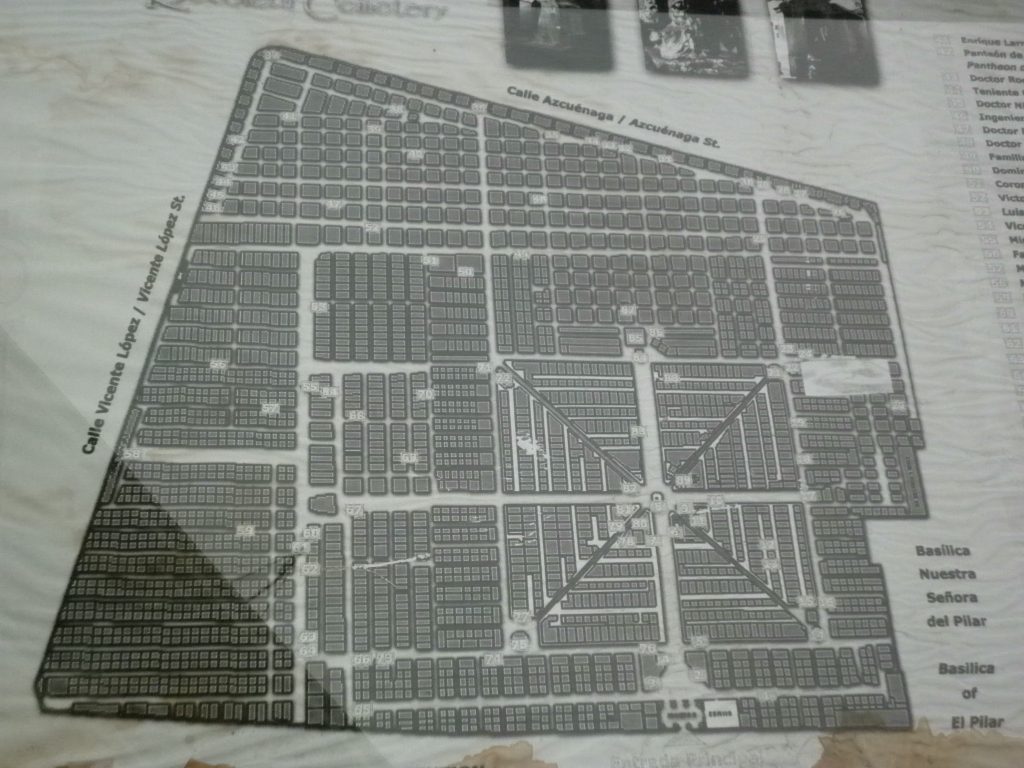 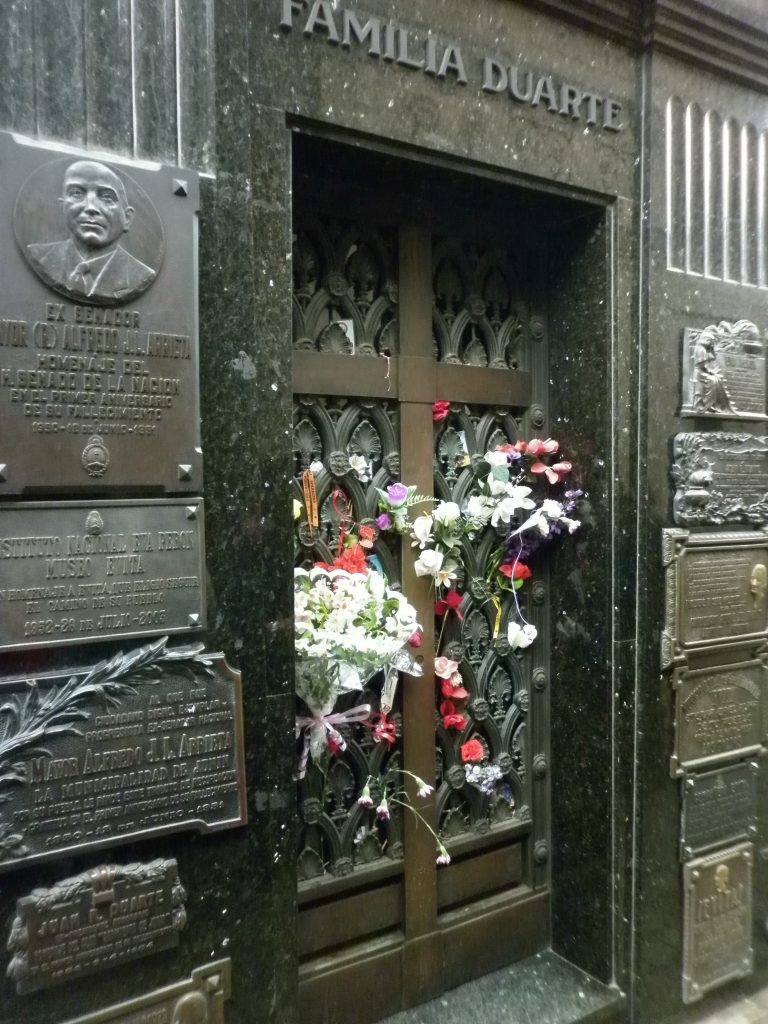 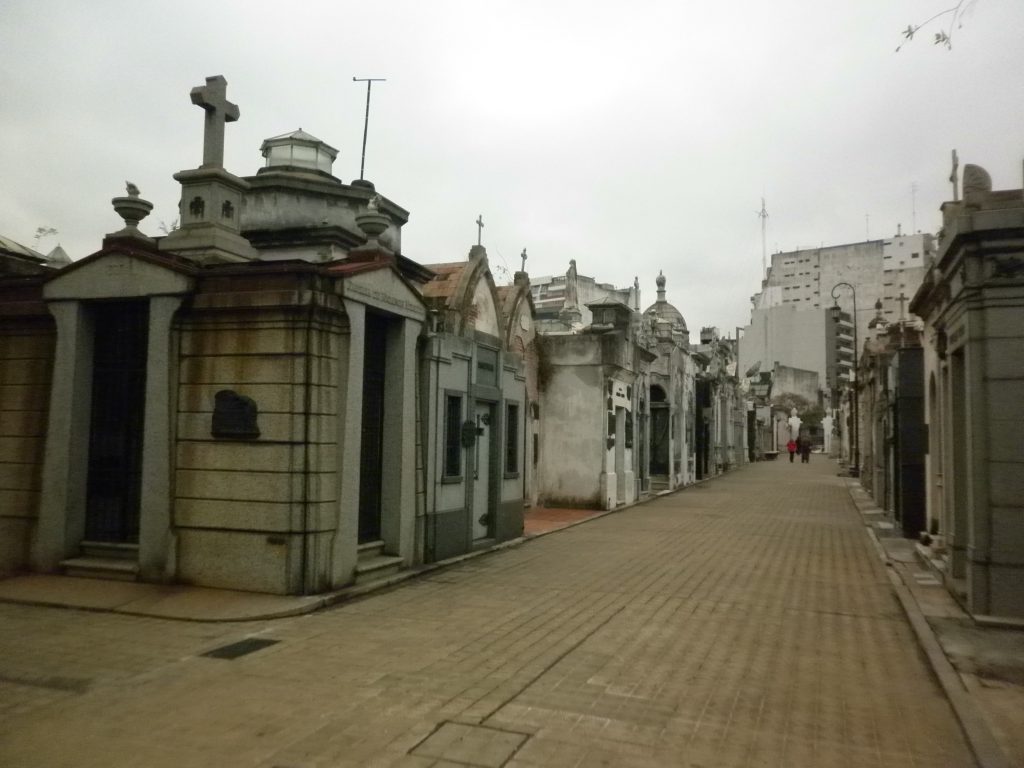 The city of the dead 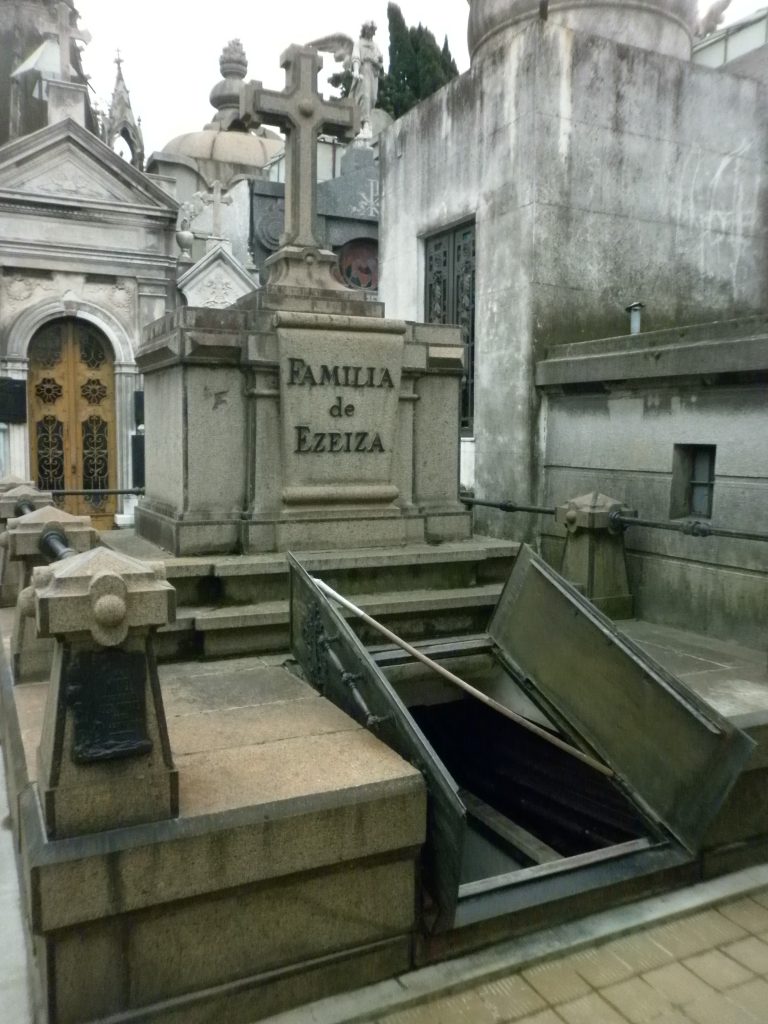 I made friends with two Irish girls, Deidre and Ailbhe, and we walked around some of the city parks that were nearby.

Later, Kayla and I went out to her favorite Japanese restaurant for some delicious sushi.  I ordered two entrees because I was so hungry.  I loved it.  After dinner, I was on a bus to make the 23-hour bus journey from Buenos Aires to Puerto Iguazu to see the world renowned Iguazu falls. 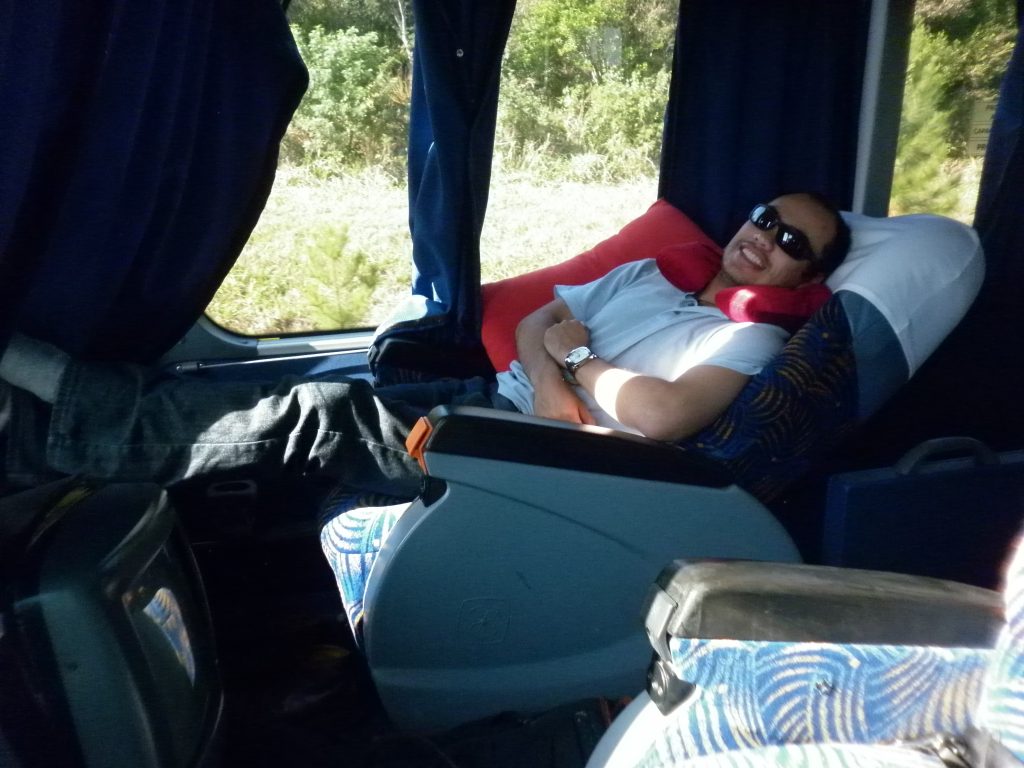 On the way to Puerto Iguazu on a "cama" bus. Looks comfortable, doesn't it?

P.S.  Special thanks to Kayla for hosting me, showing me around the city, and giving me her insight on Argentinian culture!  You’re the best, Kayla!

This entry was posted in Argentina. Bookmark the permalink.