A couple of weeks ago, on June 15, 2011, I took a day-trip from Buenos Aires to Colonia del Sacramento, Uruguay.  A Peruvian girl I met at the hostel I was staying at said she went and said how pretty it was. It was only a 3-hour boat ride from Buenos Aires and the ferry ticket was less than 100 USDs.  And because the historic quarter was designated as a World Heritage Site, I was under the impression that it simply had to be cool.
I had gone out tango dancing until late the night before and I had to catch the ferry early in the morning.  I was really tired.  Despite the zombie-like haze through which I perceived the world around me, I was really impressed with the appearance of the ferry.  It felt like I was boarding luxury cruise ship.  As soon as I boarded the ferry, I found an empty row of seats near the back and slept the entire 3-hours.  I was out like a light.
I awoke just before we arrived.  I met a Mexican guy who was staying at the same hostel.  I told him my plans the day before and sold him on the day-trip to Colonia del Sacramento so he decided on his own to do the same.  He was technically from North America and I always enjoy the company of someone with whom I have at least something in common, albeit obscure and minute.
But on our arrival in Colonia del Sacramento, he left to go on an organized tour and I was off on my own again.  My tour began at gate of the city wall.  I always like to imagine what historic places were like in their heyday.  Being an old Portuguese city with the Spanish across the Rio de la Plata, I imagined giant 18th century, Spanish warships bombarding the city and the Portuguese defenders hunkered down behind the walls. 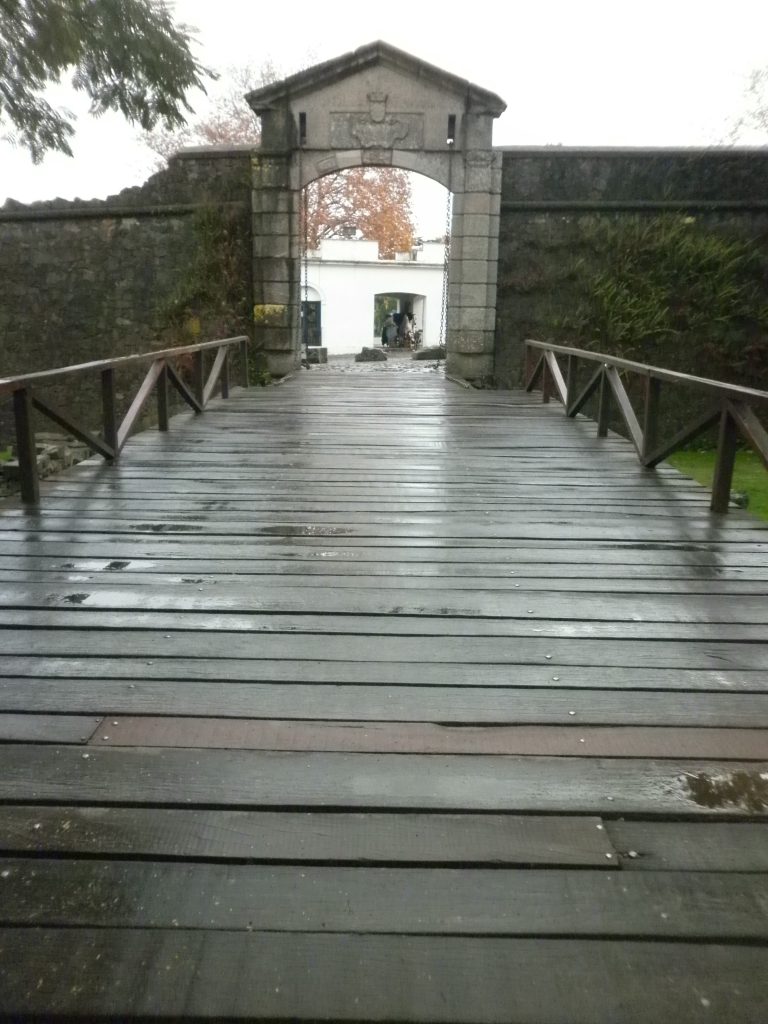 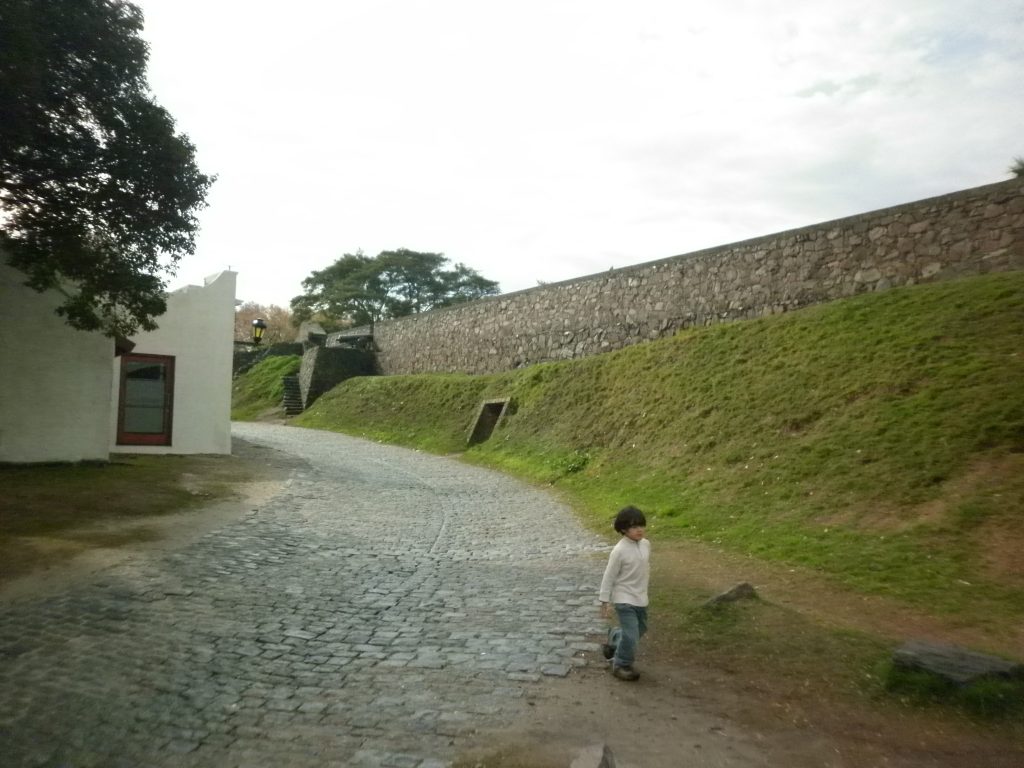 From there, I wandered the cobblestone streets, climbed a lighthouse, walked through the plaza, and sat down for a while at the end of the dock at the yacht club. 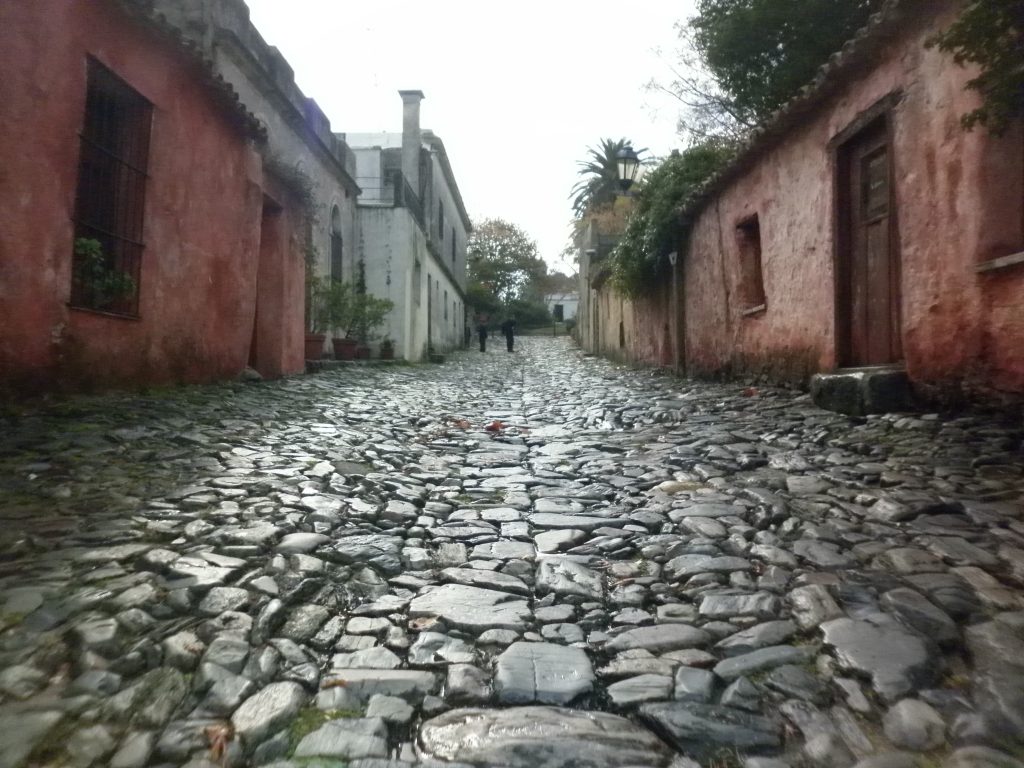 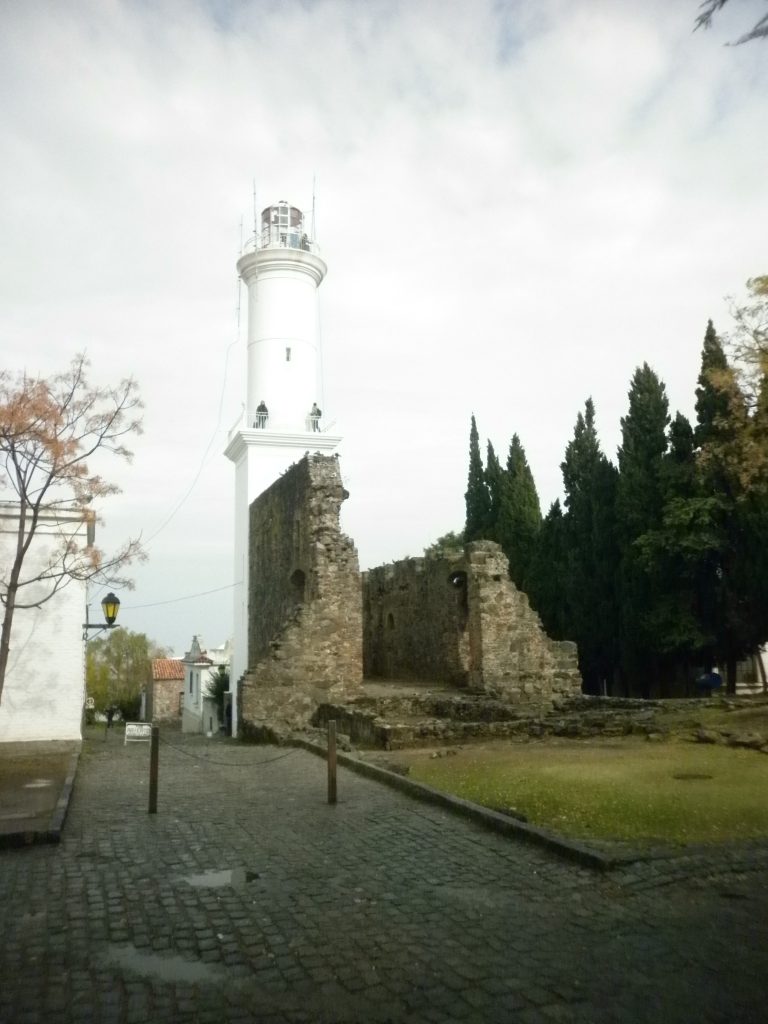 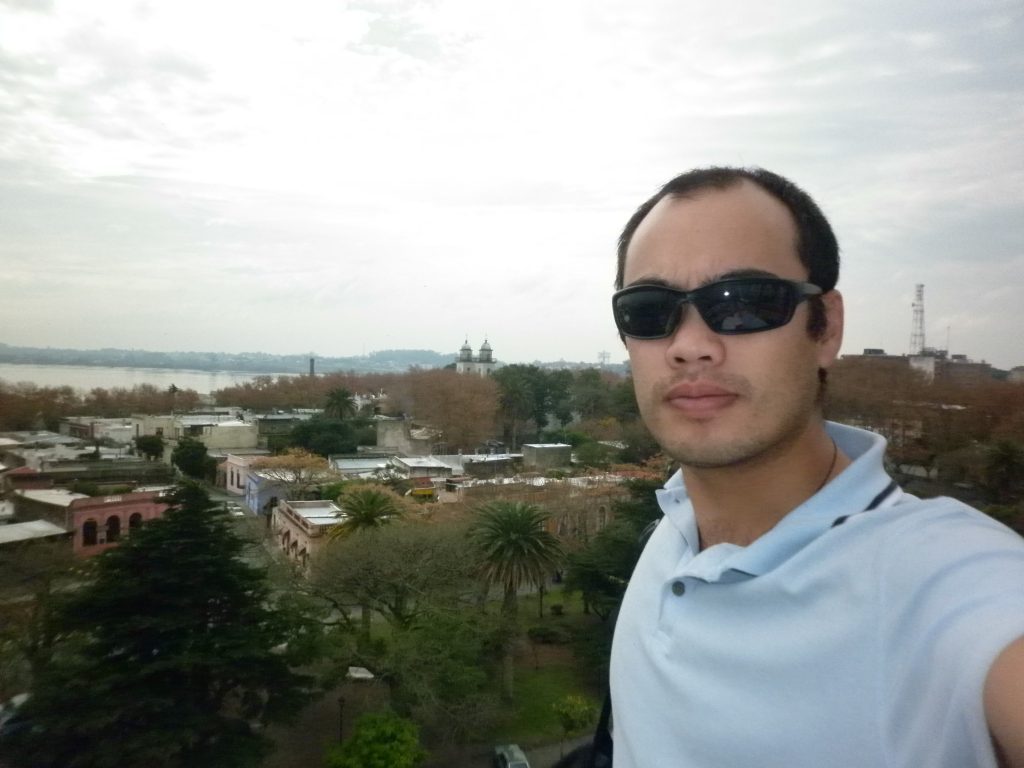 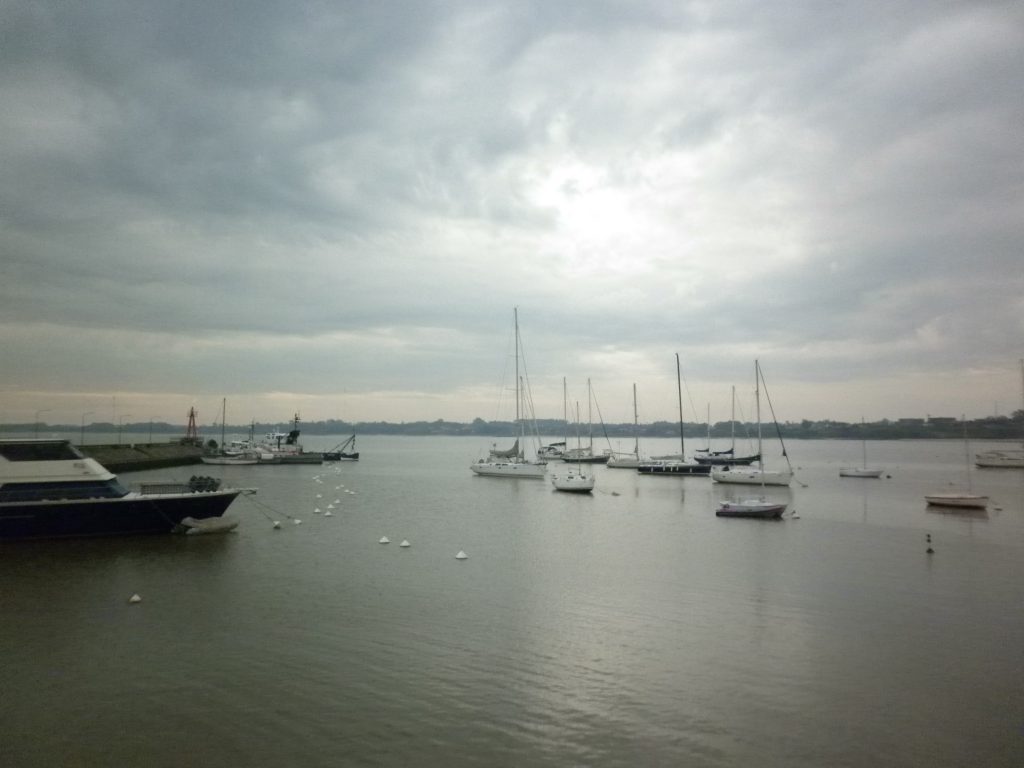 At the yacht club

South America is full of small, sleepy towns whose key selling feature for tourists is that they’re simply old, vestiges of the colonial era.
I’ve seen dozens of towns like this and I think maybe I’ve become desensitized to the historic and cultural value.  I’m ok with that though.  I know I’m more of a “people” person and I have more fun exploring the outdoors.  For example, I had more fun walking on the slippery, algae-covered rocks next to the river than the rocks that make up the cobblestone streets of the city. 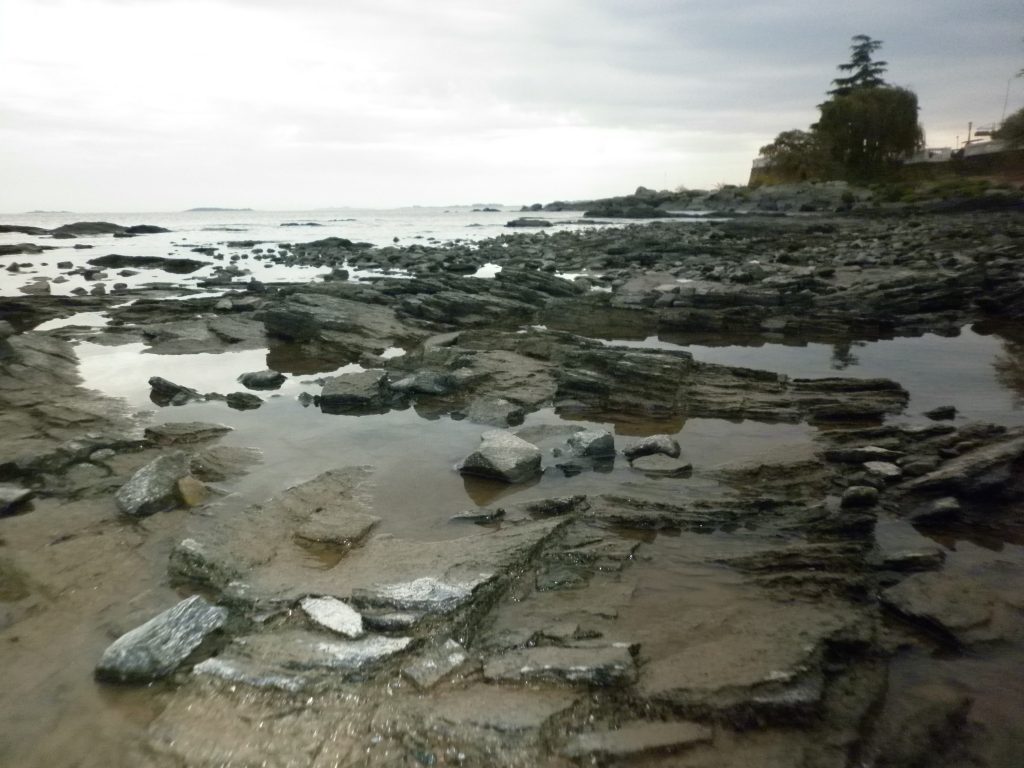 Along the riverbank of the Rio de la Plata

I take an inquisitive approach to travel.  There is no promise that the next place I visit will be as exciting as the one before.  For me, the value lies in just exploring and experiencing what’s out there.
At the end of the afternoon, I boarded the ferry and slept the entire three hours back to cosmopolitan Buenos Aires.  It would be nice to visit Uruguay in the summer because I’ve heard the beaches were really nice.  Nonetheless, I came to terms long ago with the fact that I can’t see everything.
This entry was posted in Uruguay. Bookmark the permalink.