The best of Bolivia!

It was hard to blog regularly in Bolivia because the places I stayed at in Santa Cruz, Oruro and Uyuni didn’t have wi-fi internet.  So I’ll just lump everything into one large blog post on Bolivia.
Being in Bolivia felt just like being in Zambia, comfortable!  When I first crossed the border from Paraguay to Bolivia, the countryside, its dirt roads, rolling hills, farmland, mud-brick buildings and corrugated-metal roofs were reminiscent of Zambia.  I was instantly in love with the place.
I started in Santa Cruz de la Sierra, partying with Jakob from Germany, Mads and Peter from Denmark, Giulia from Italy, and Zoe from the UK.  It was great fun! 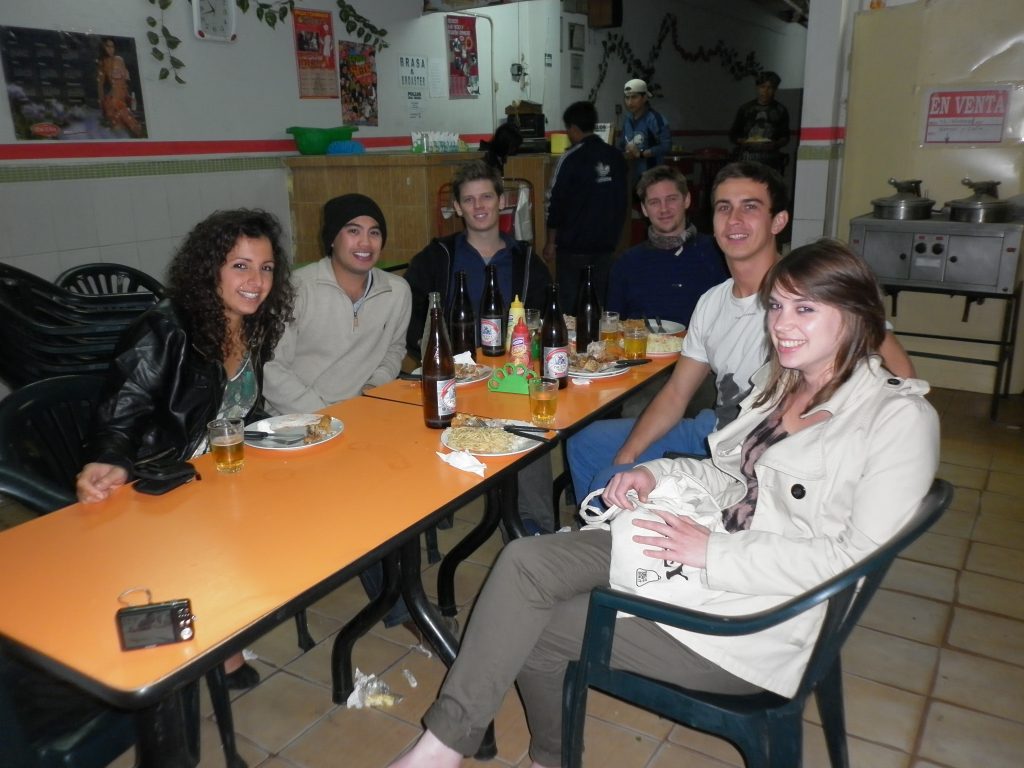 Our party crew. From left to right: Giulia, me, Peter, Mads, Jakob and Zoe

Afterwards, it took me 2 full days of bus transportation to get to Uyuni.  There was a day-long stop in Oruro where I was lucky enough to be there at the same time as a wedding celebration that carried on in the streets .  I later had a rough bout with altitude sickness since Oruro is 4800 meters above sea level.  Combined with the 8-hour, rickety bus ride in the cold darkness down the bone-jarring dirt road to Uyuni will forever seared into my memory as the “Transport from Hell.”
Uyuni was cold; I’d been warned by other travelers.  The salar de Uyuni, the famous salt flats, were a photographer’s paradise.  You could take lots of fun pictures fooling with depth perception. 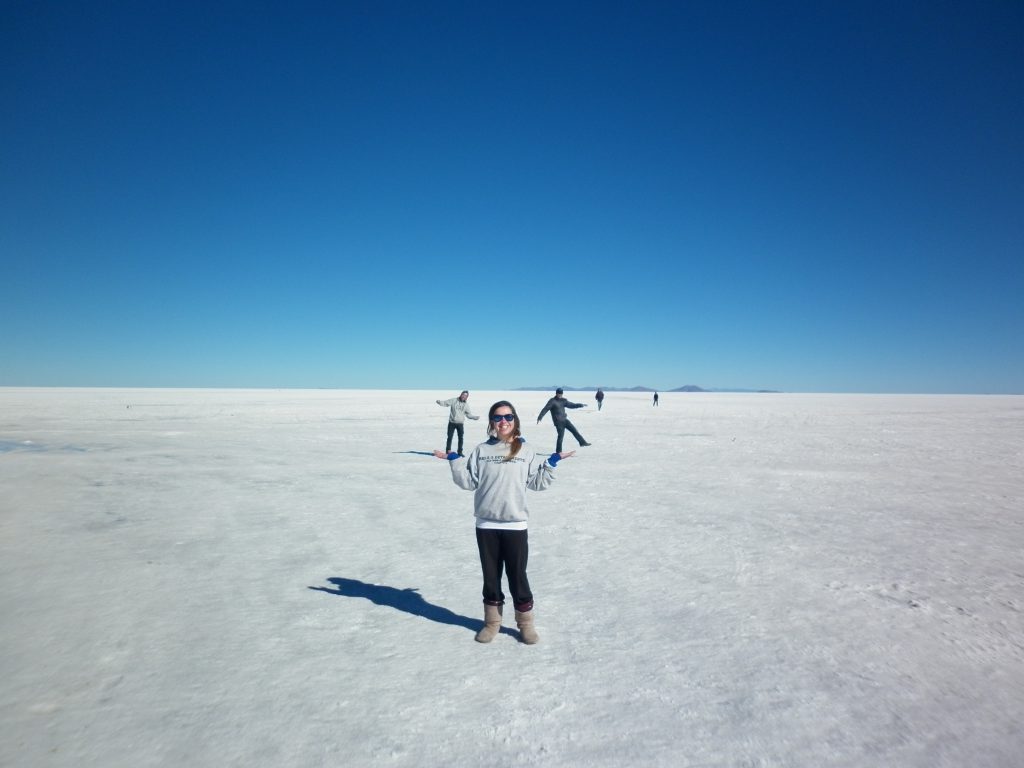 After Uyuni, I went to La Paz.  My plan was to be in La Paz for a few days only; I ended up being there for more than two weeks!  I met up with Maribel, a friend of a friend, Sidney, from back home.  Maribel introduced me to her friends, Mikaela and Eric, and her brother, Justo, who were all so hospitable and friendly.  Eric let me stay at his house in Coroica, putting me in touch with his friend, Jose Luis, after mountain biking down the famous Death Road. 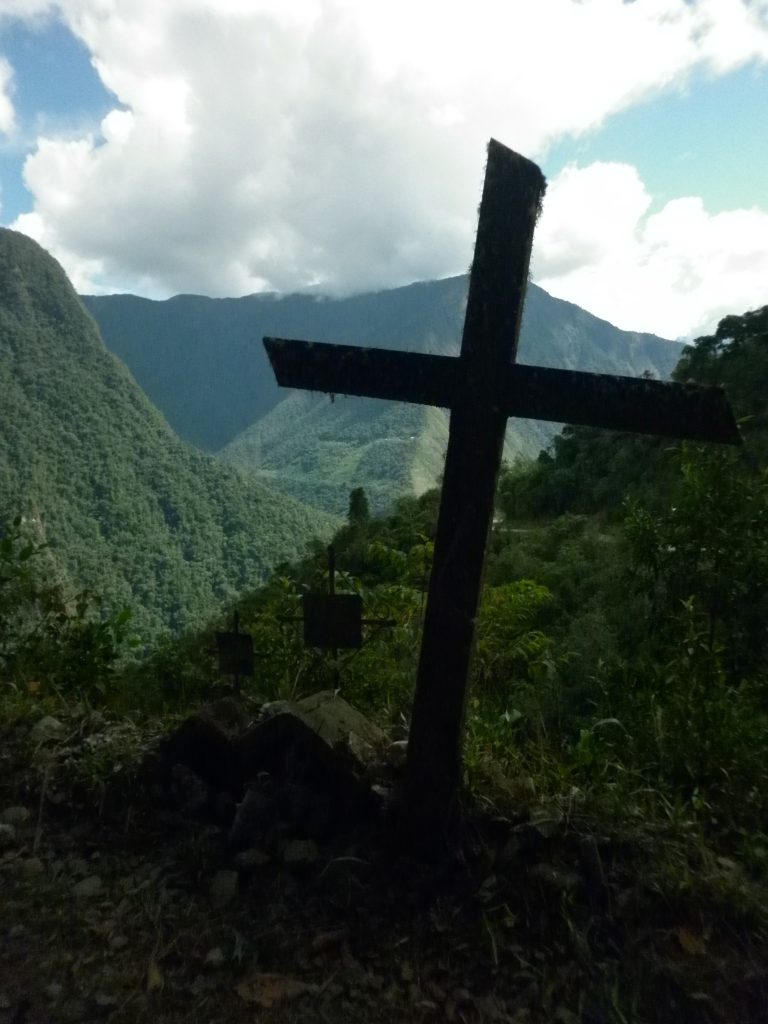 They don't call it Death Road for nothing! 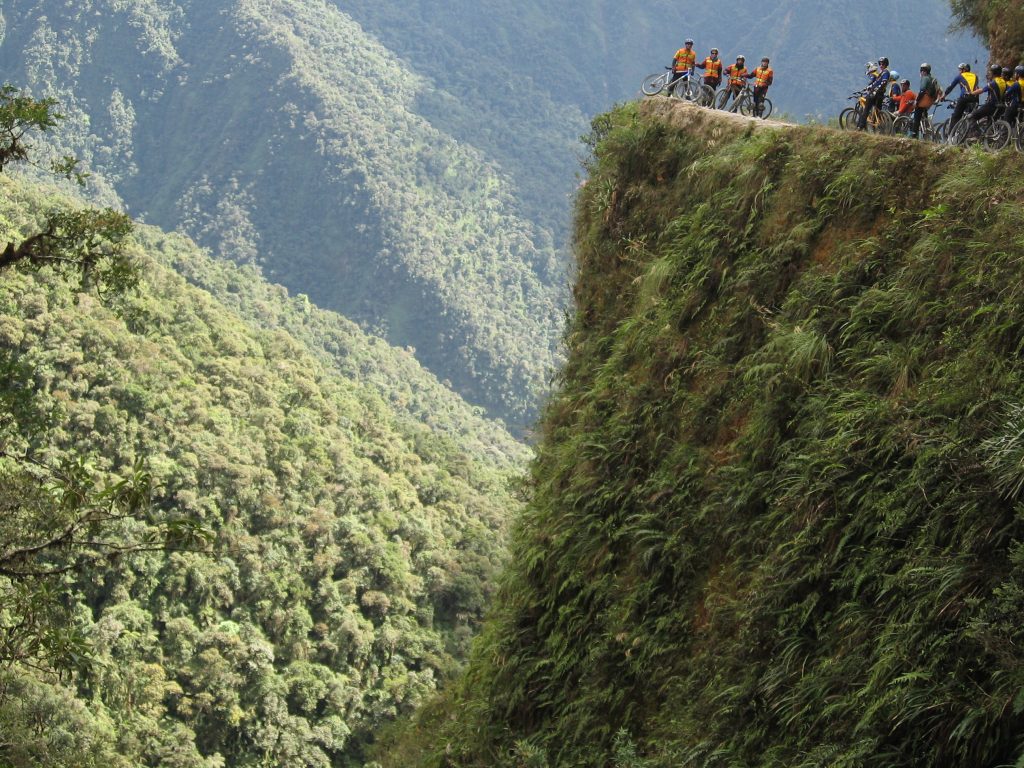 That's me on the far left trying to hold one wheel precariously over the edge.

From left to right: Me, Eric, Justo and Maribel

Other highlights of La Paz include: 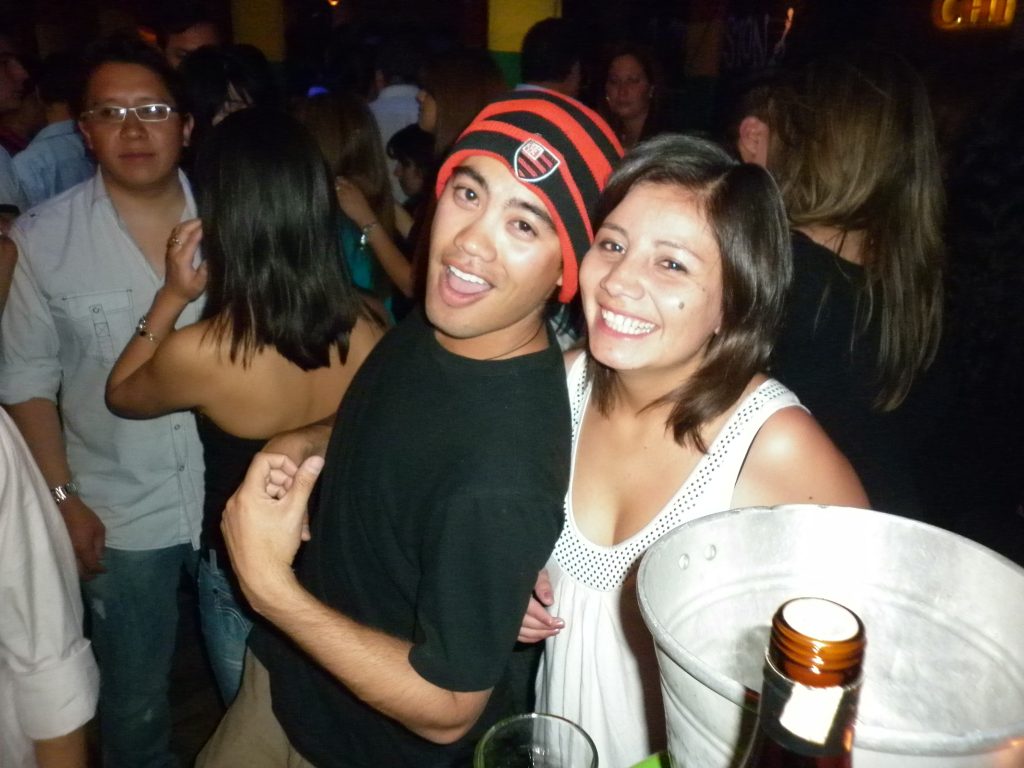 Mika and I at Gitana nightclub 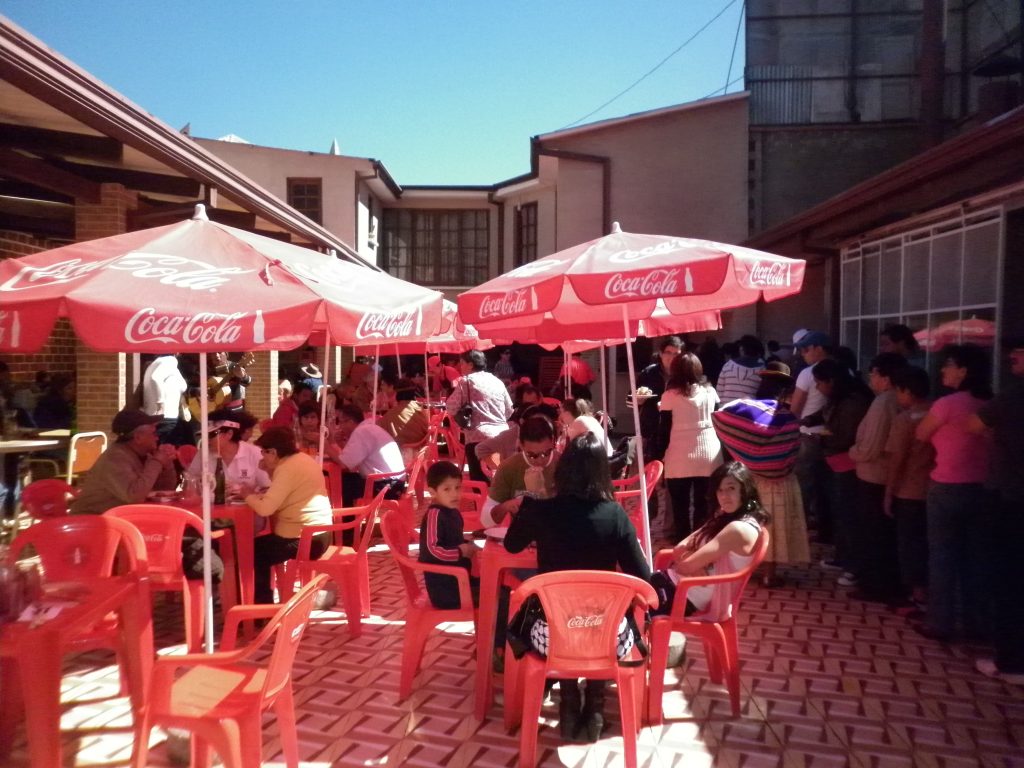 Established more than 40 years ago by Maribel's family, the Chicharroneria Irpavi is very popular on the weekends. Long lines and full tables are the norm, and for a good reason, too. The chicharron here is to die for! It's like bacon, but better. 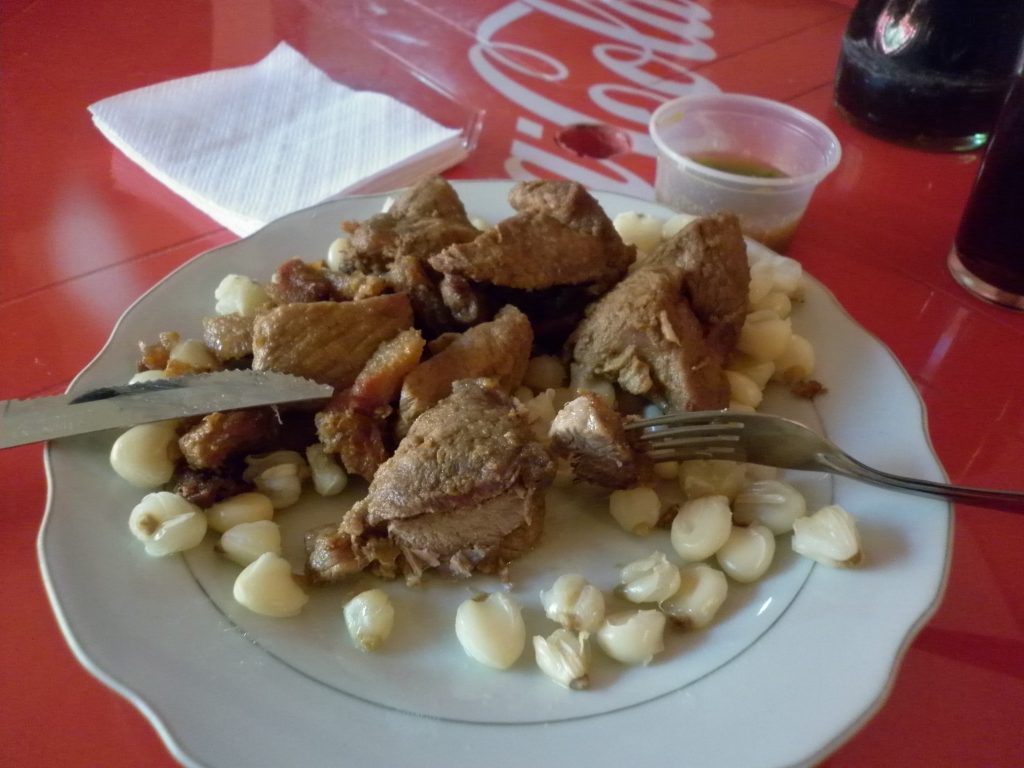 My half-eaten plate of chicharron. I tore into it, savoring every delicious morsel.

Food in Bolivia was so cheap.  I could eat a meal for 3-4 USDs at a fancy restaurant.  In hole-in-the wall restaurants, I could get a more hearty meal for 1 USD, which included soup, a main entree and a drink.  The relatively low cost of food in Bolivia only encouraged more eating.  The same could be said for the cost of beer and drinking.
Not only was food cheap, but it was also very delicious.  Mika was very enthusiastic about me trying as many Bolivian foods as possible.  Who was I to argue with the lady?  I ate everything and I had seconds… and I had thirds.  It was very easy to indulge in Bolivian food.  I ate so much food that Mika had a conversation about the 7 deadly sins and gluttony.  She called me a glutton.  Guilty as charged.
Another interesting cultural observation was the Bolivian’s different concept on the idea of sharing.  When sharing a meal, they take a little bit of food as needed and they are comfortable with the likelihood that the food might not be shared as evenly.  I, on the other hand, tend to want everything alloted evenly.  If that isn’t possible, I become competitive.  I’ll get my food early, eat fast, and then go for seconds.  Only in retrospect did I realize the error of my ways.   On two separate occasions, she had to restrain me from getting too much food too soon, or what I perceived as the fair portion alloted to each individual. (Example: 12 buffalo wings / 3 people = 4 buffalo wings per person)  In Bolivia, you get a little bit at a time and you don’t keep count. 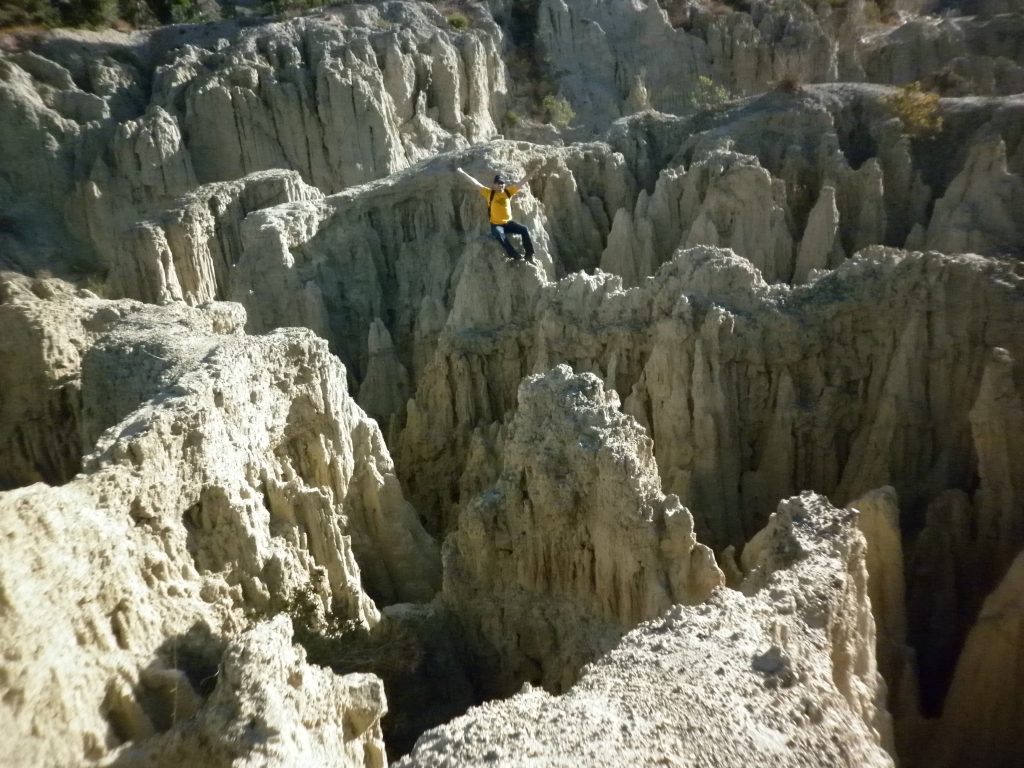 At the Valle de la Luna 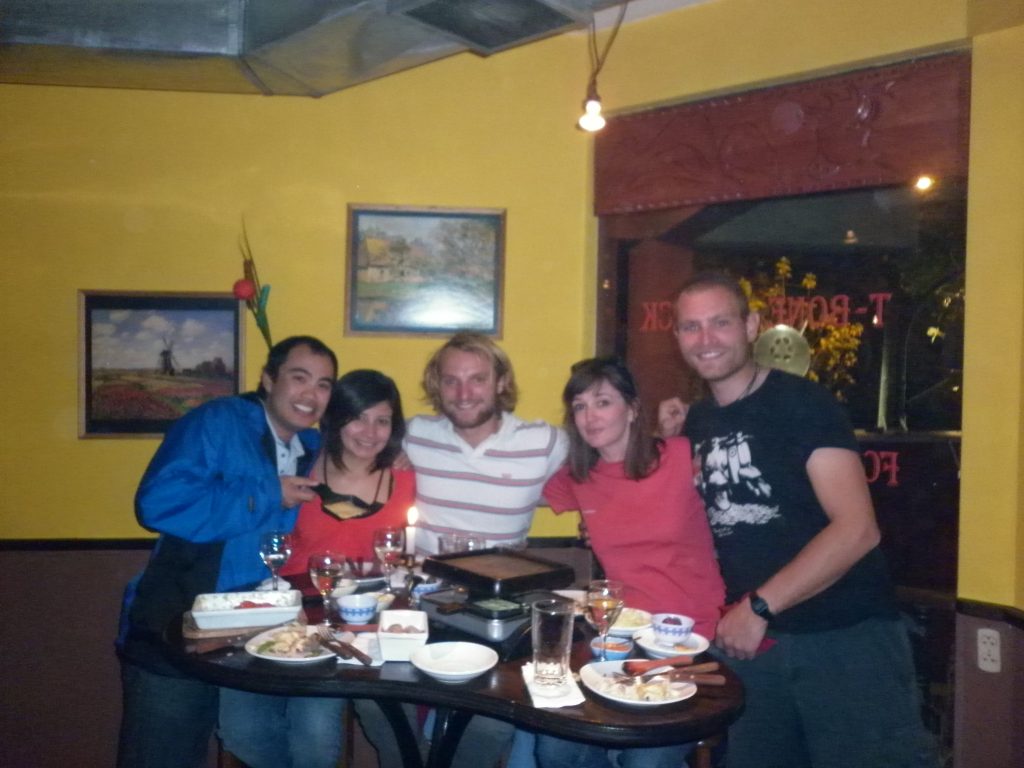 Cheese! That's what Swiss raclette is all about. You melt cheese in a grill and then eat it with meat, veggies, and potatoes. From left to right: me, Mika, and our dear French friends, Romain, Corinne, and Phil. 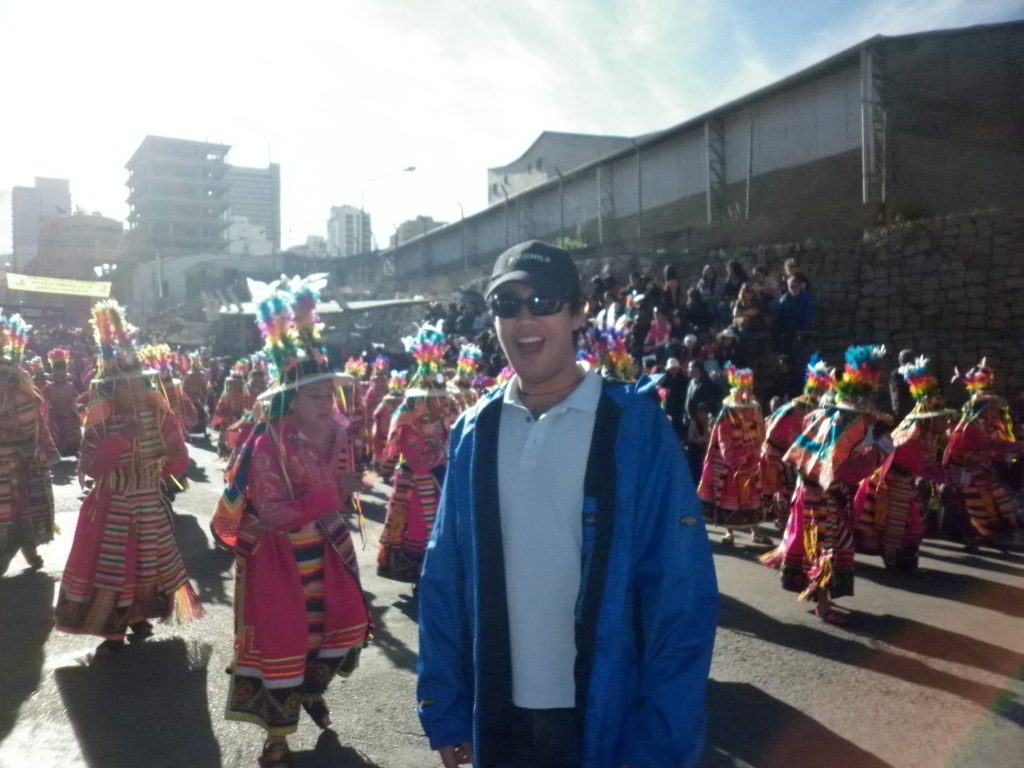 Every year, the local universities in La Paz put on a big parade to show off traditional Bolivian dances like tinku, caporales, and morenada. Coincidentally, there was a parade at almost every single town that I visited when I was in Bolivia.

I ended my visit to Bolivia at a town called Copacabana on the shores of Lake Titicaca.  At 3,811 meters, or 12,500 feet above sea level, Lake Titicaca is the world’s highest commercially navigable lake.
I had seen a totora reed boat that is unique to the lake before at the Native American museum in Washington, D.C., and it was nice to see one in real life on Lake Titicaca. 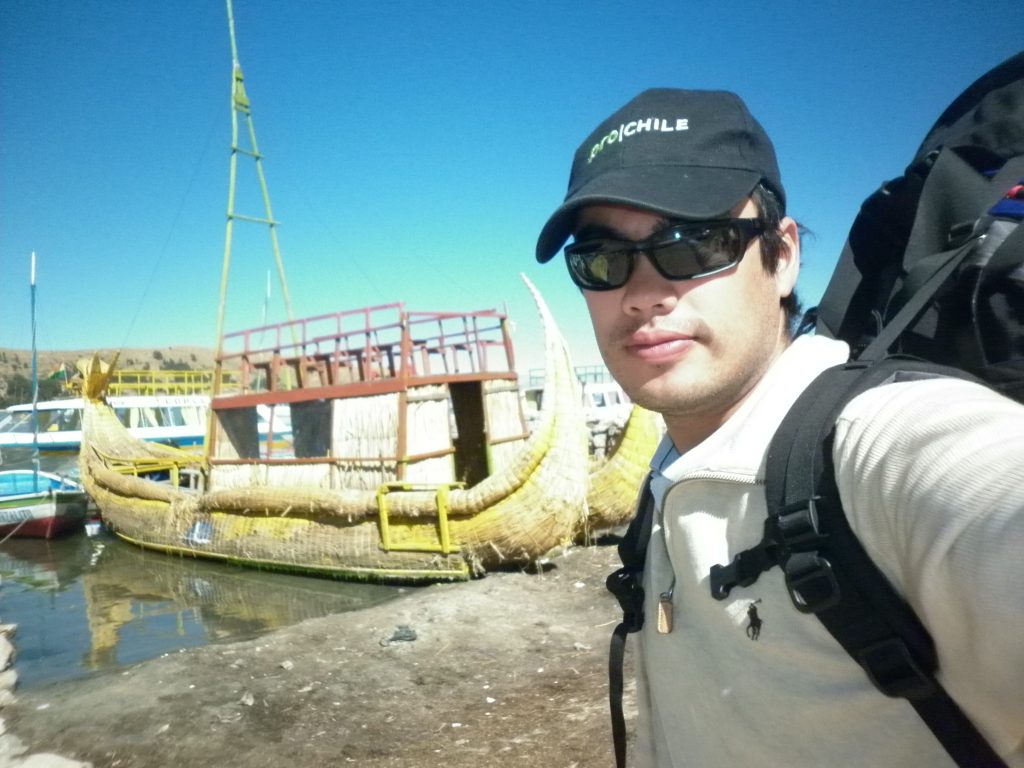 A totora reed boat on the shore of Lake Titicaca 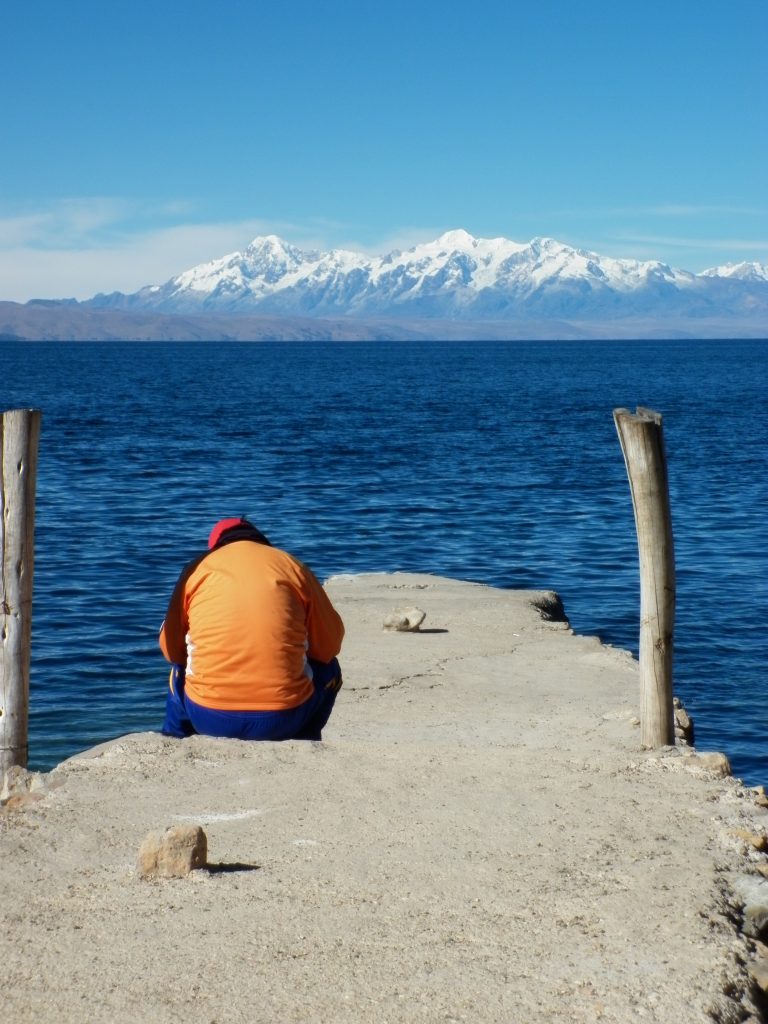 Lake Titicaca, Bolivia. This was taken at the dock on the Isla del Sol.

Copacabana also has a great deal of religious significance in Bolivia.  People come here to get married, pray to God, have their cars blessed, and so forth. 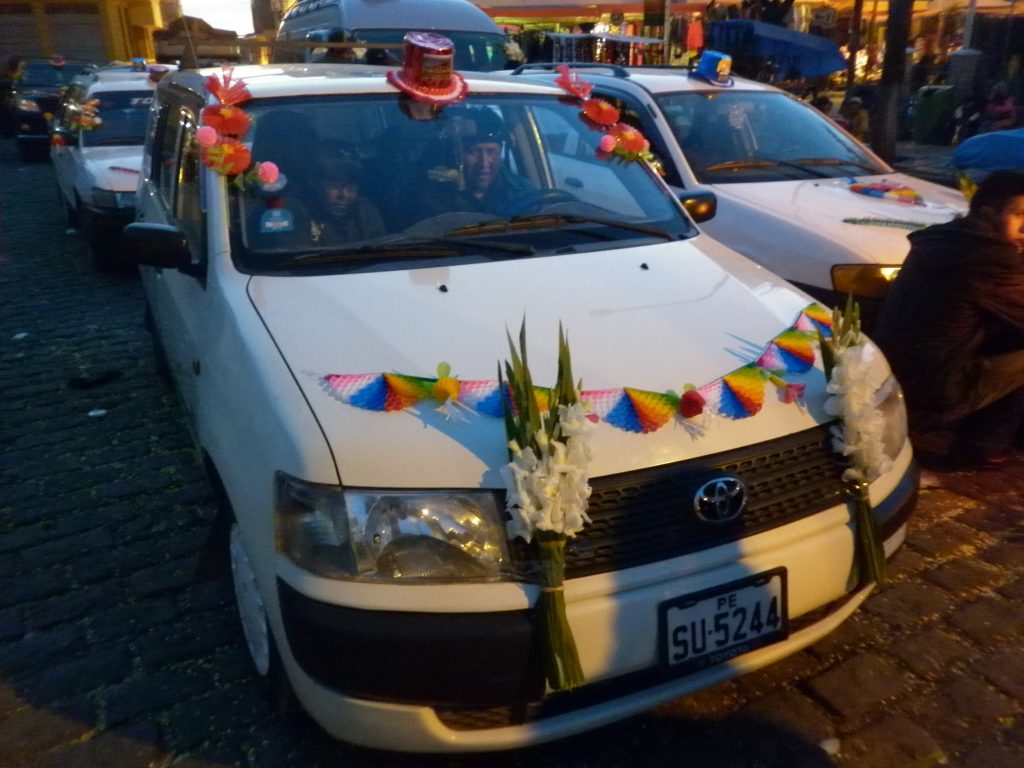 They line up in droves in Copacabana to have their new cars blessed. Here you can see how they decorate the cars for this special occasion. 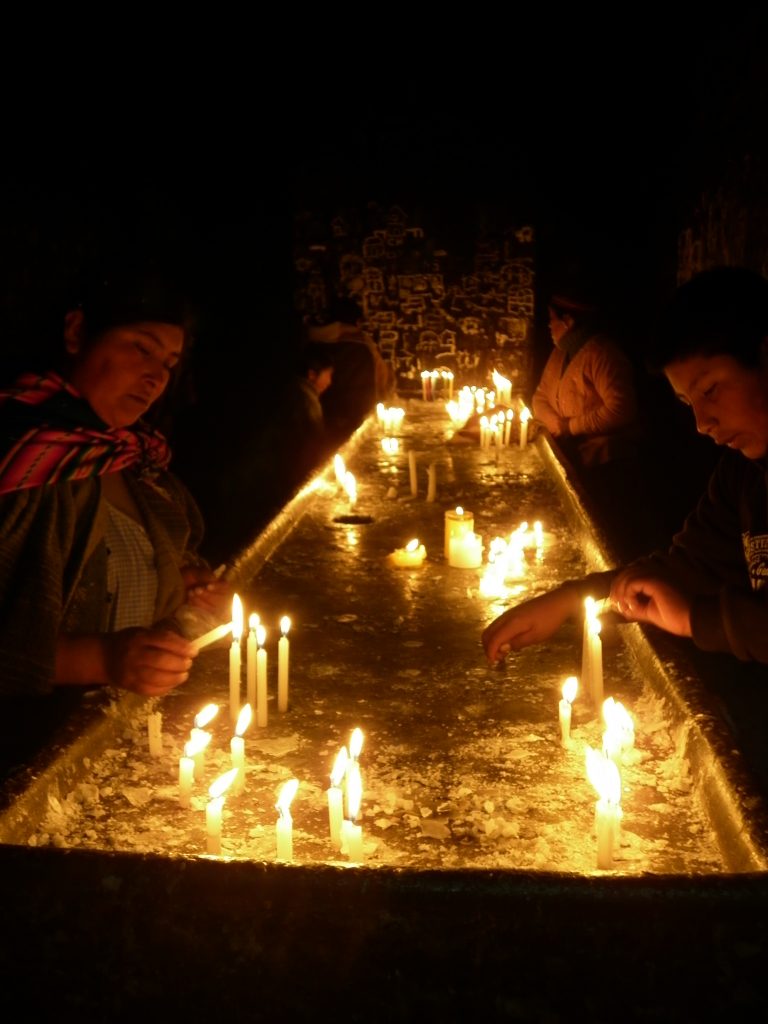 Lighting prayer candles at the church in Copacabana, Bolivia 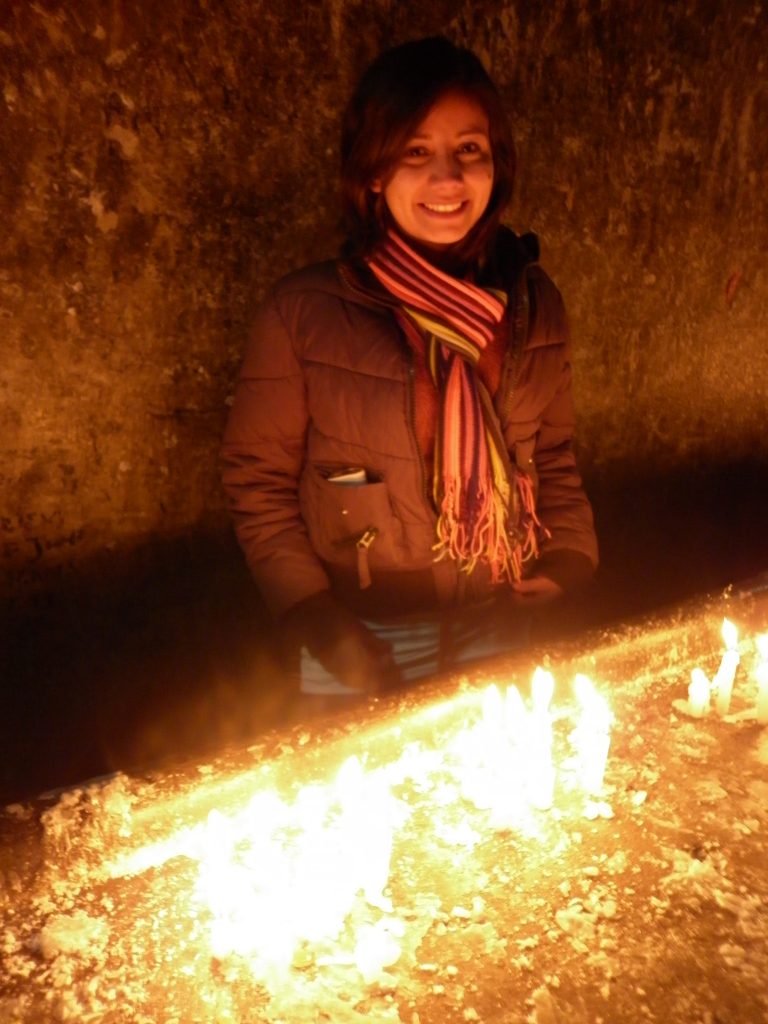 Copacabana was my last stop in Bolivia.  Mika and I said our tearful goodbyes and then I was off on my own again.  I took a four-hour bus ride to Puno, Peru, waited two hours, and then took a 30-hour bus ride to Lima.  We passed through the desert and drove next to the ocean.  The bus broke down on the way a few hours outside of Lima, but it was cool.  Nothing surprises me anymore when I travel. 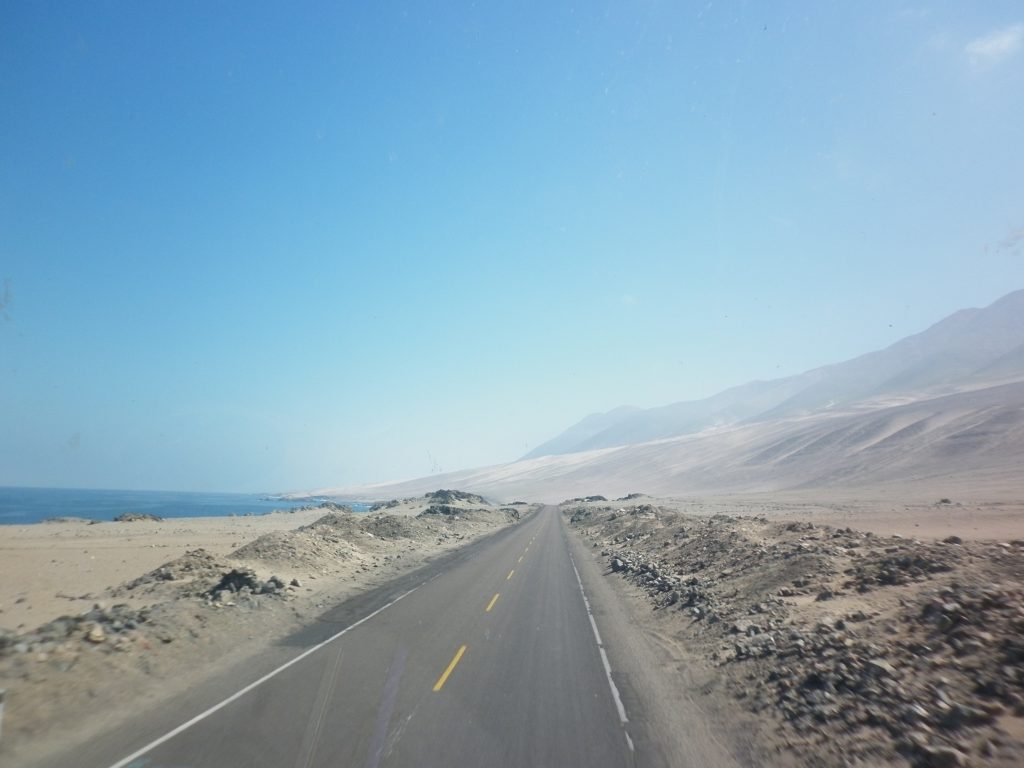 This entry was posted in Bolivia. Bookmark the permalink.