On the way to Lima, my bus broke down just after sunset.  Although it was cold and dark, we were lucky enough to stop next to a vendor on the side of the street selling bread, snacks, drinks and oranges.  Although it seemed like we were miles from nowhere, I felt pretty safe there knowing that at least we wouldn’t starve.  Also, given our rather dire situation, I made sure to buy a little bit of food and drink to avoid being a victim of price-gouging on the part of the food vendor should we end up having to spend the night on the road.
The bus had a little bar area near the front near 2nd floor.  I sat at the table with other passengers and talked to pass the time.  I showed off my Kindle and its amazing worldwide internet capabilities, which is always a big hit among the strangers that I meet in South America.  Eventually, our bus started going again and we arrived in Lima at 1 am.
I had no idea where I was going to stay when I arrived so I struck up a conversation with a French couple and asked if they knew of any good places to stay.  We ended up sharing a taxi to Kokopeli Hostel in the Miraflores district, which is the wealthy part of Lima. Since I was still a bit hungry, I ventured out into the neighborhood.  It was full of bars, nightclubs and pizzerias.  The area was a lot tamer than I thought it was going to be.  I guess whenever I arrive in a capitol city, I usually expect the worse: pickpockets, armed thieves and kidnappers.
In S. America, pizza is highly over-rated and, therefore, over-priced so I was left with the only other option at about 2 in the morning: McDonald’s.  After downing my quarter-pounder with cheese and french fries, I went straight to my hostel and promptly to bed.
I switched hostels to the Ekotambo hostel, thanks to the recommendation of two Peace Corps Volunteers serving in Peru and because I had been displaced by another traveler who had made a reservation.  I was all right with that because the Ekotambo hostel was a lot nicer and more laid-back than Kokopeli hostel.  If you ever want solid travel information about an overseas locale, ask a Peace Corps Volunteer.  I’ve met Peace Corps Volunteers in Peru and Paraguay and they’re all really cool people, idealistic and very easy to get along with.
I used to regale Christina with stories from my own stint in Peace Corps Zambia when we were housemates in Arlington, VA, and I like to think that I played a role in inspiring her to join Peace Corps.  It truly is a unique organization.  I cannot overstate the significance of the impact that my experience in Peace Corps Zambia had on my life, and I was very excited that Christina was just getting started with her experience Peace Corps.
On August 6th, I made my way out to a town called Chaclayo, just outside of Lima near where she was going through her Peace Corps training.  I met Christina and her friend, Josh, at one of the local parks.  We caught up after not having seen each other for about 3 years.  After all that time, we hadn’t lost step and I felt that we had even grown even more similar. 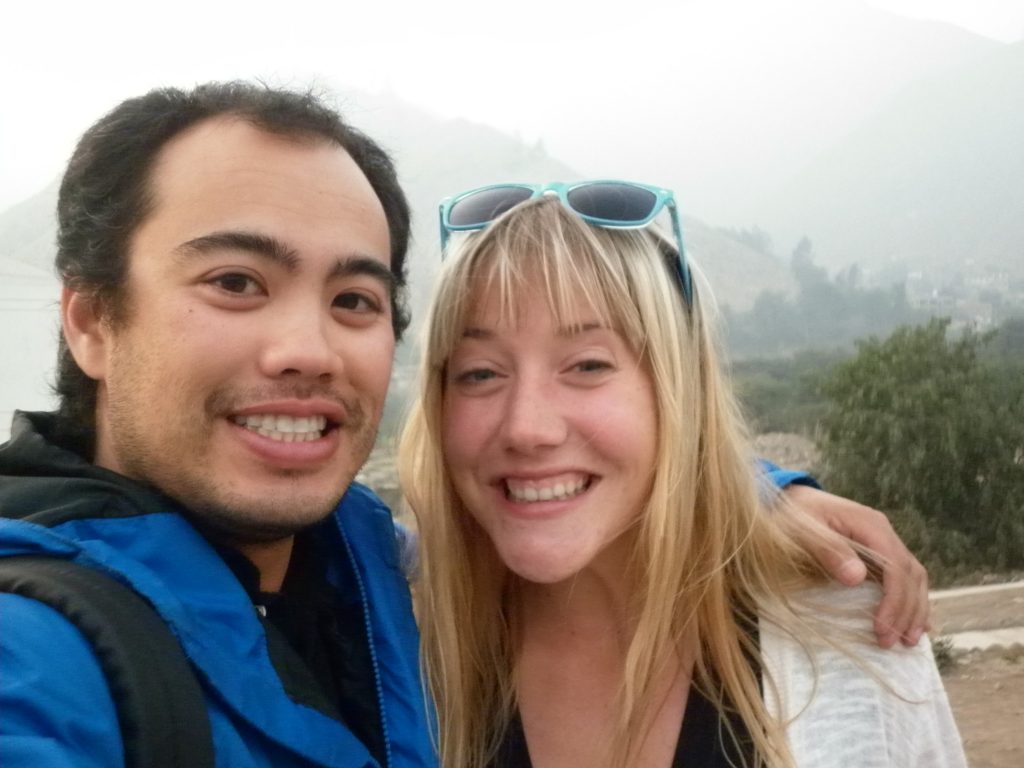 Meanwhile, I’d been trying to get in touch with my classmate, Christian, who hadn’t returned my phone calls the entire weekend.  I was beginning to get dismayed thinking that I’d come all the way to his hometown and that I might not see him.
So on Sunday, I had plenty of time to kill and wait for him to get in touch with me.  I met up with Georgiana, a Romanian girl from Bolivia who was on the same Lima-bound bus that I was on and we spent the entire day touring the center of Lima, taking pictures and we watched the movie “Super 8” in Spanish, which was pretty lame because I didn’t understand one bit of it.  Somehow I thought that my Spanish had gotten good enough to at least get the gist of the movie.  Where I got that idea?  I have no idea. 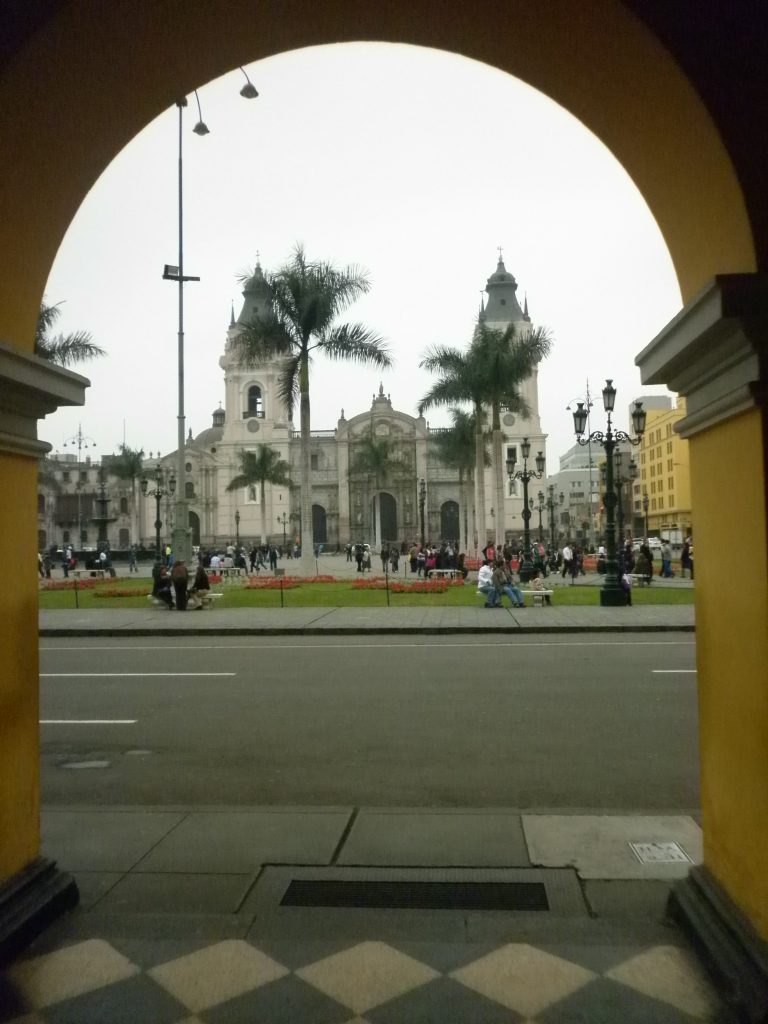 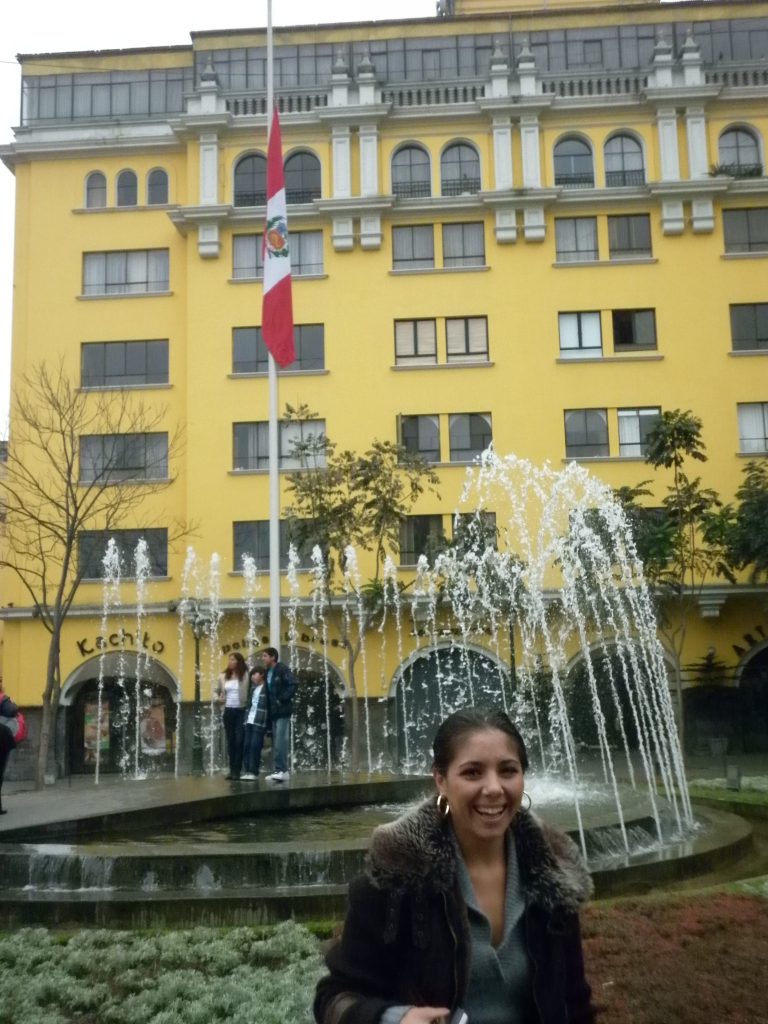 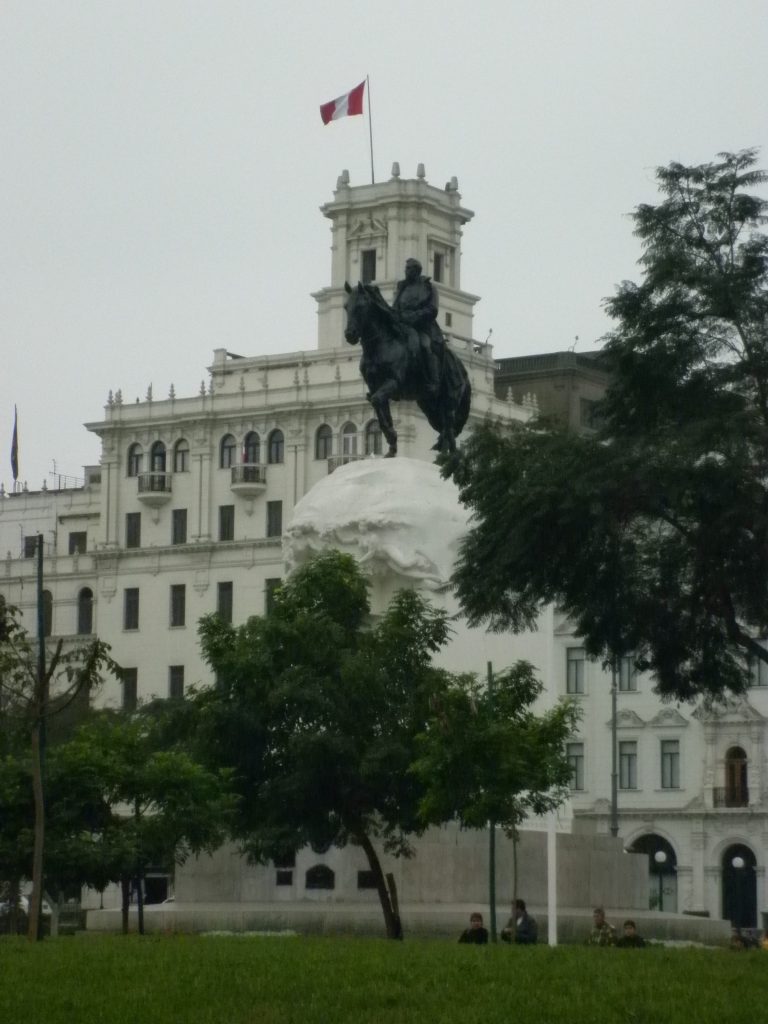 The next day, I had lunch with a Julia, a Peace Corps Volunteer that was staying at the same hostel as I, and her Peruvian counterpart, Yvette.  Christian finally called me back and we met up later that night.
Christian and I talked about our days as VMI cadets so many years ago and brought each other up to speed as to what we had both been up to since graduation.  He had spent a few years working in the US, made his way back to his hometown where he worked his way up pretty fast in Peru’s finance industry.  Christian bears the proud distinction of being the unofficial chapter of the VMI alumni association in Peru as he is VMI’s first and only graduate from Peru. 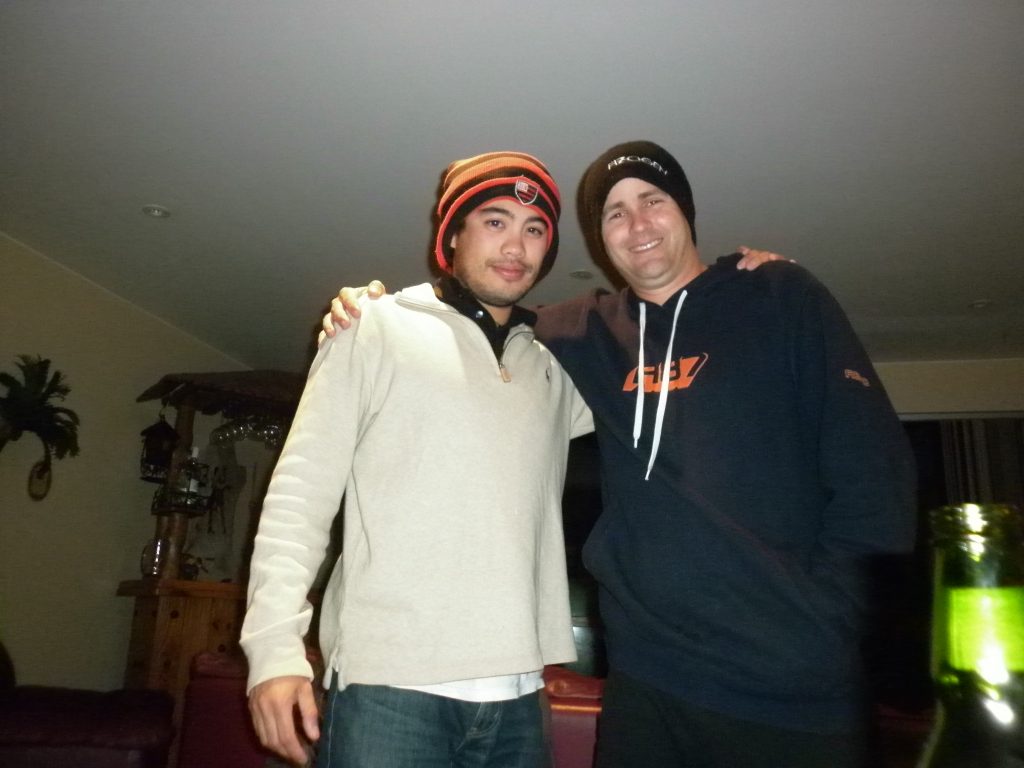 Me visiting with Christian Blanch in his hometown, Lima, Peru. Rah Virginia Mil!

Having visited Christina and Christian in Lima, I hopped on bus heading north the following evening and woke up the next morning in Trujillo eight hours later.  Two hours later, I was in Puerto Chicama where the longest left-hand break in the world was.
It was truly spectacular, but the huge, 9-16 foot waves there were way beyond my skill level and physical condition.  I hadn’t done any cardiovascular activity in months and I hadn’t swum in more than a year so I figured that I’d probably drown if I risked paddling out in Puerto Chicama.  All I did was hang out and eat lots of ceviche and every other seafood dish I encountered in the restaurants.  It was pretty lame to go all that way and not surf, but I can always come back. 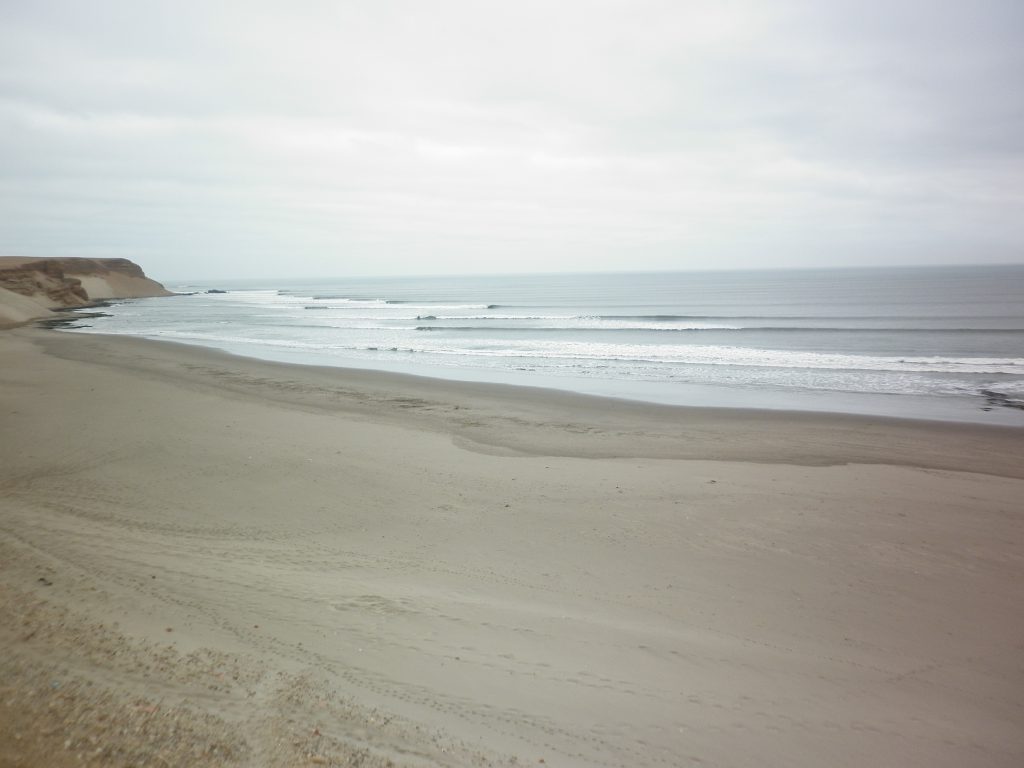 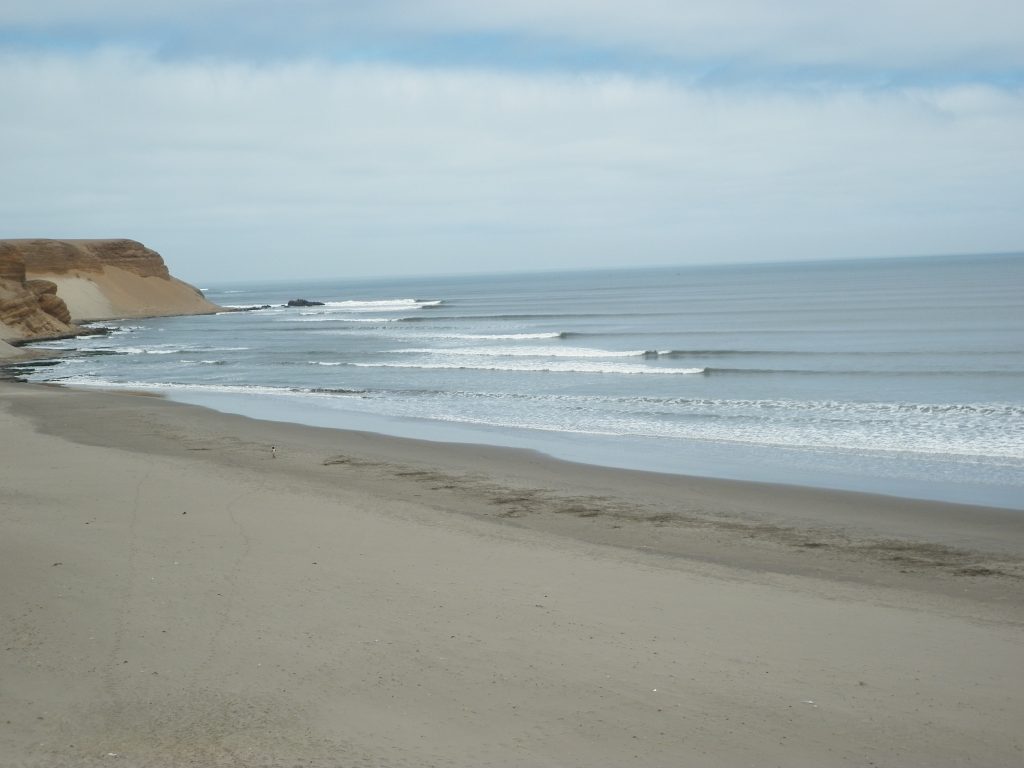 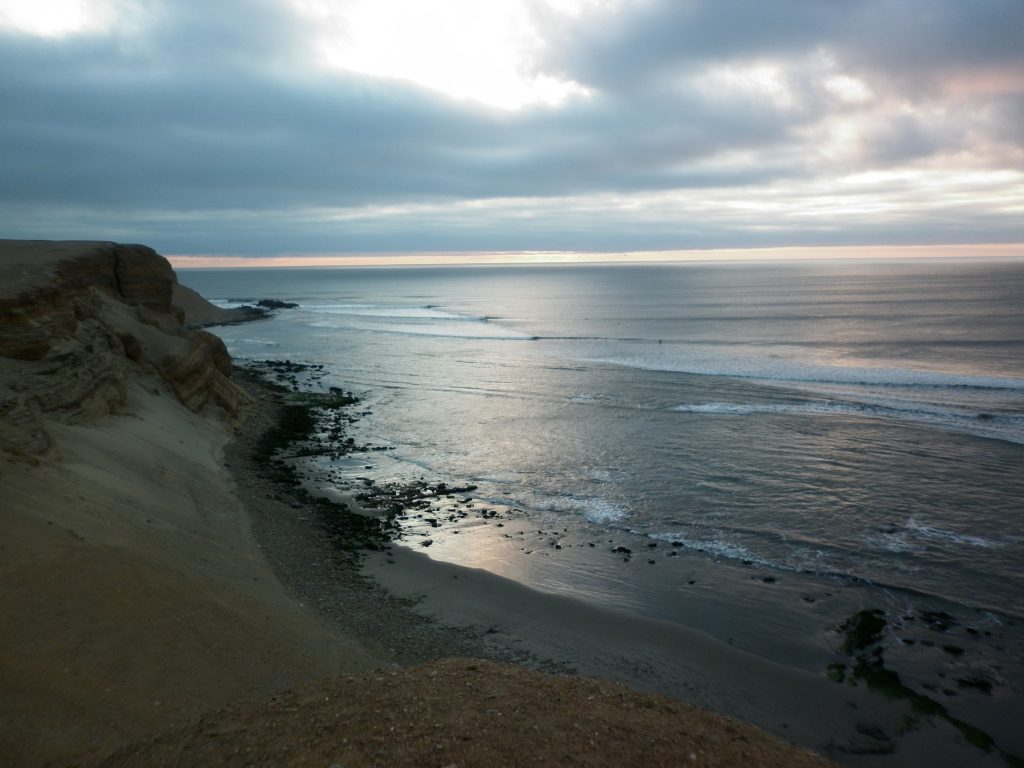 It would’ve been logical to continue on to Ecuador overland, but my friend Anna sent me a message saying that she could meet me in S. America in two weeks to travel with me.  I thought I’d have more fun if I could explore the Galapagos Islands with Anna so I bought a plane ticket to Colombia to wait for her to arrive.  I flew back from Trujillo to Lima and then Bogota in about 4 hours.  I had to reach deep into my pockets to pay for the $600 dollar ticket, but I really hadn’t much interest in doing anything else.
At that point, I was done traveling.  All the buses, time spent alone and money spent to sleep and eat had begun to wear on me.  Colombia is my second home outside the United States so that’s where I decided to go.
View South America May 2011 to ??? in a larger map
This entry was posted in Peru. Bookmark the permalink.