We woke up in the morning anchored about a hundred yards from the beach at Chinese Hat Island.  After breakfast, I swam to shore while the rest of the tour group took a dinghy to get to the island. 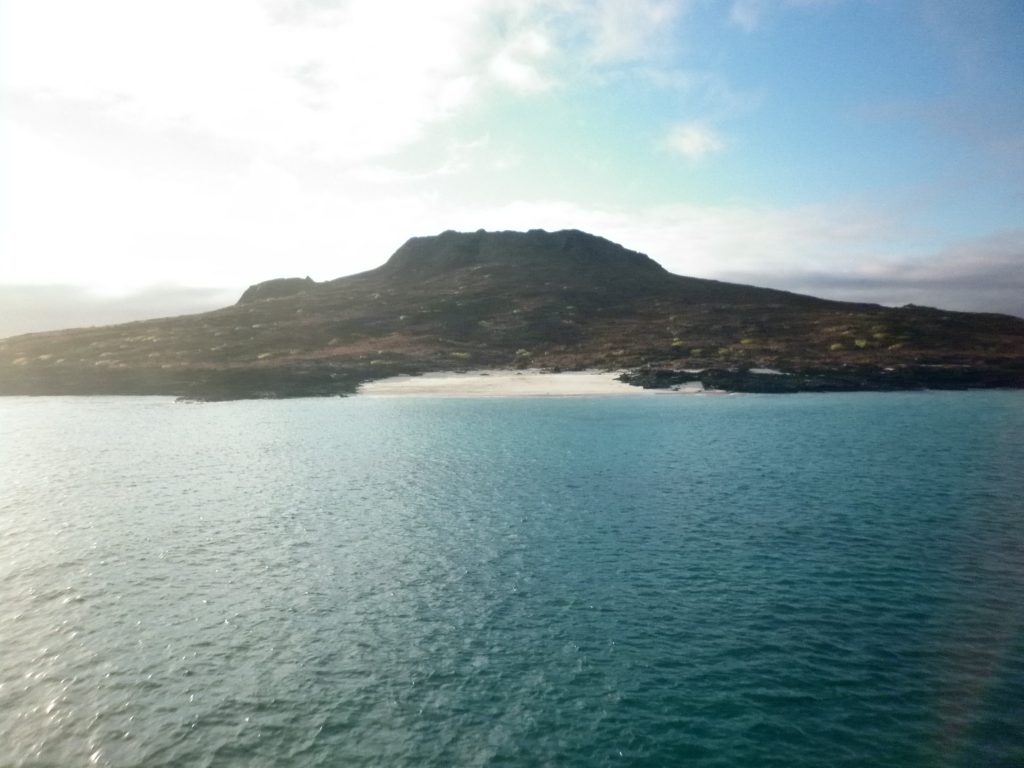 On the island, we took a walk and saw crabs, many sea lions and a large male elephant seal. 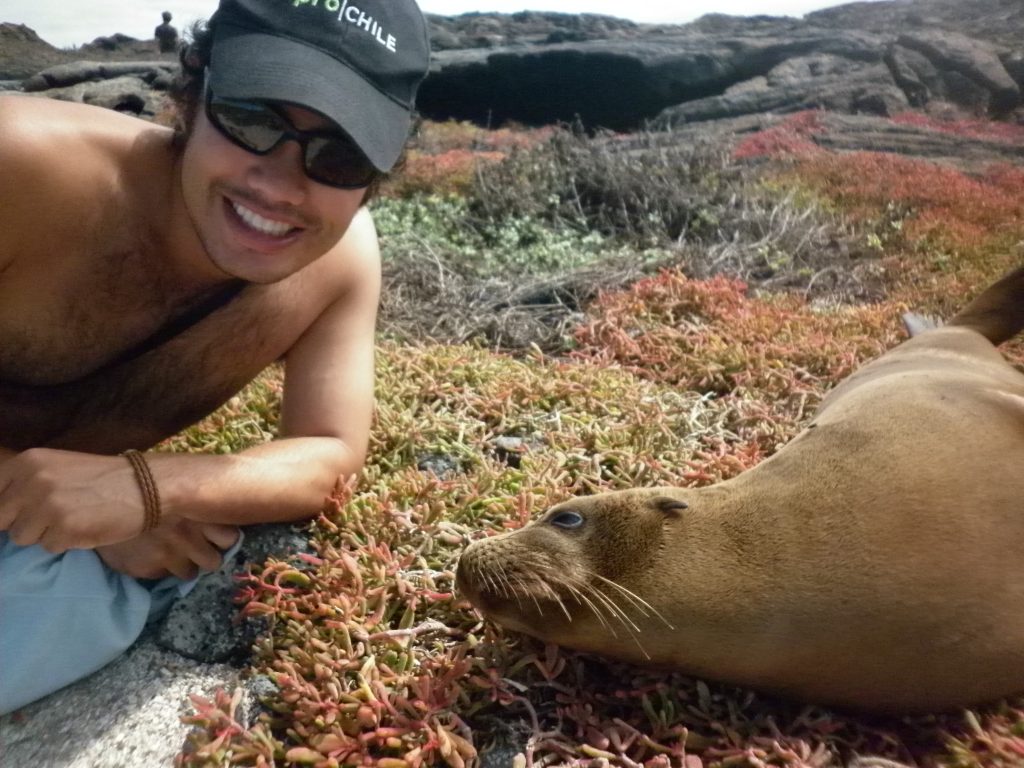 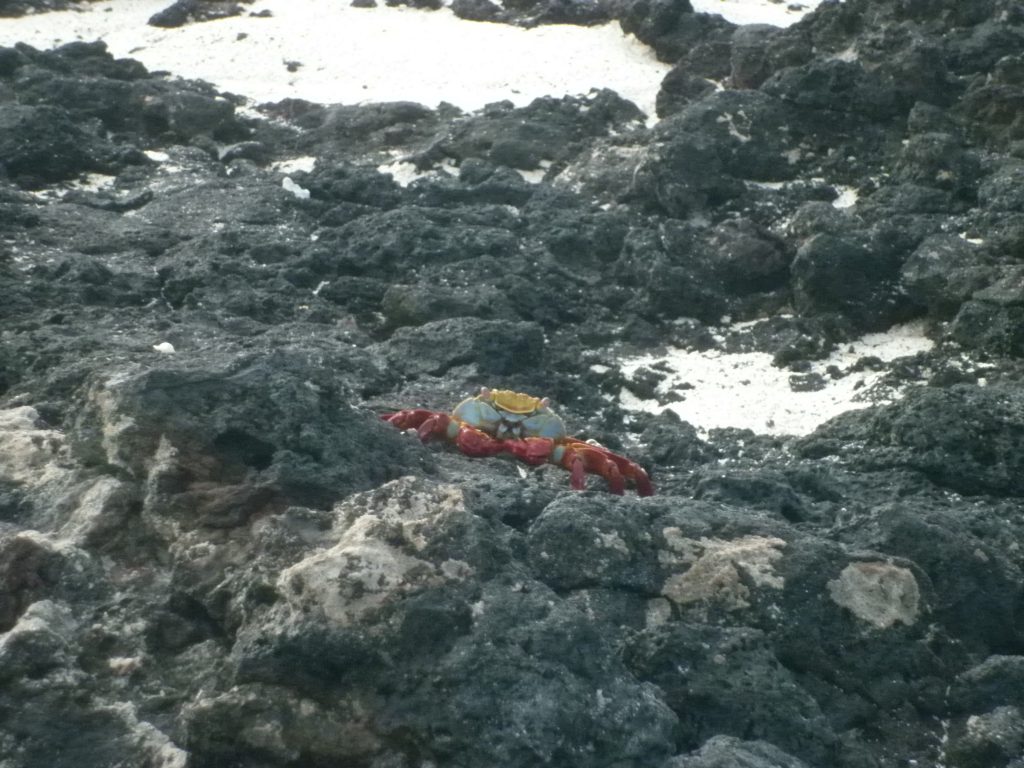 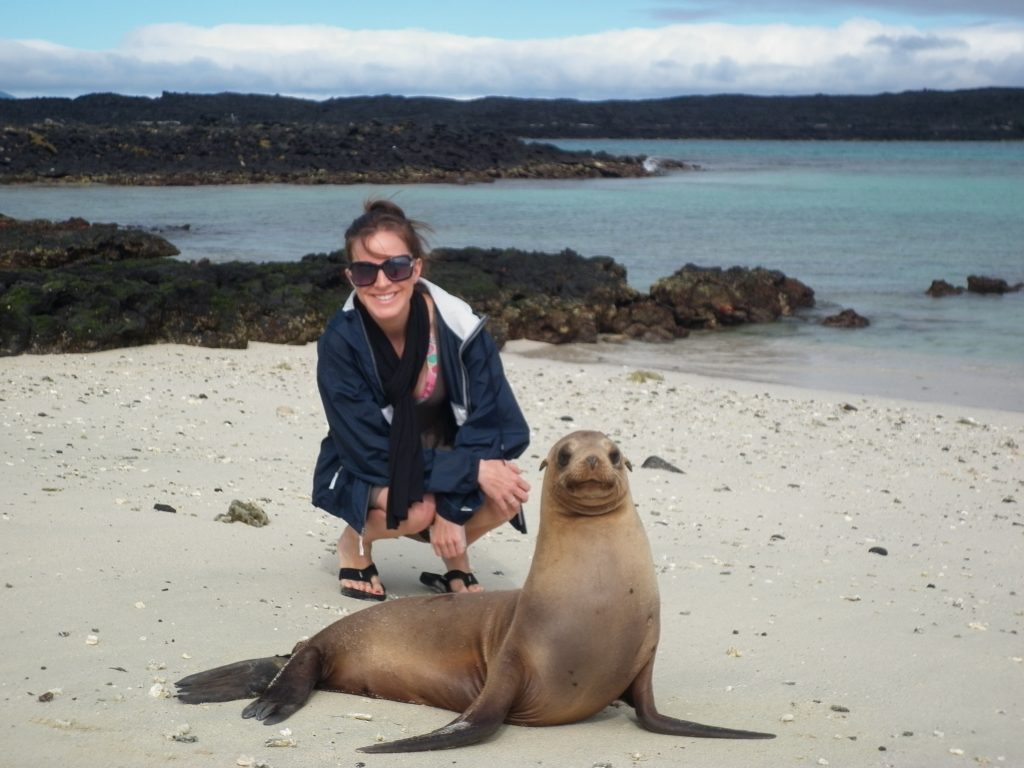 Great pic of Anna with a sea lion! 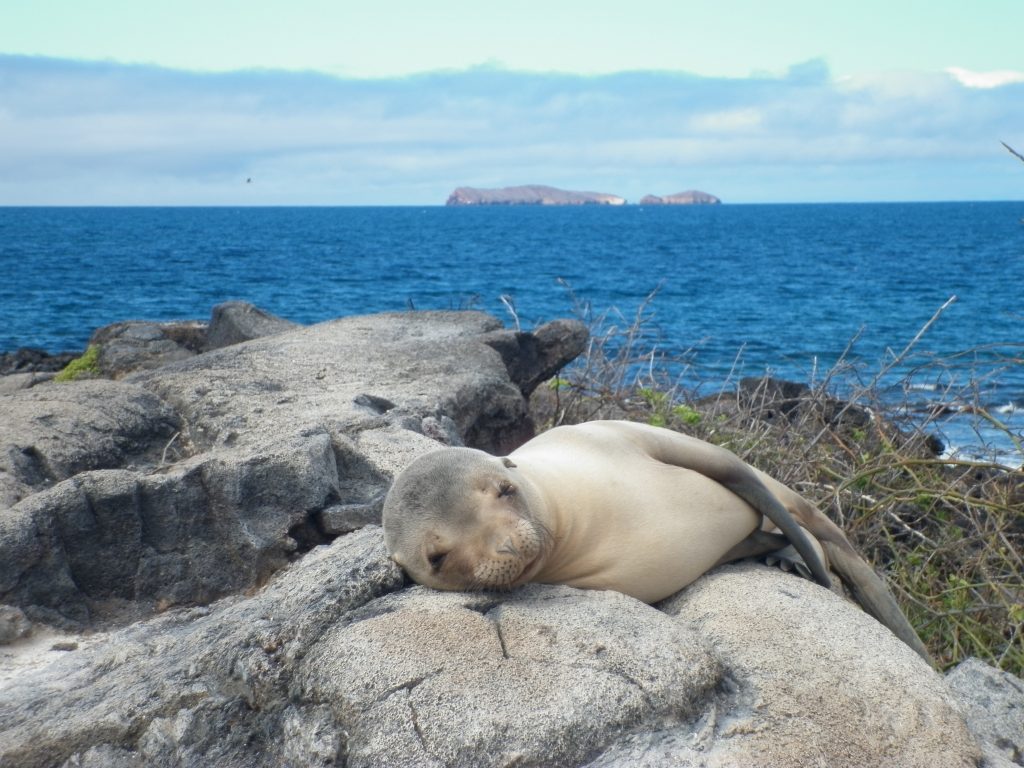 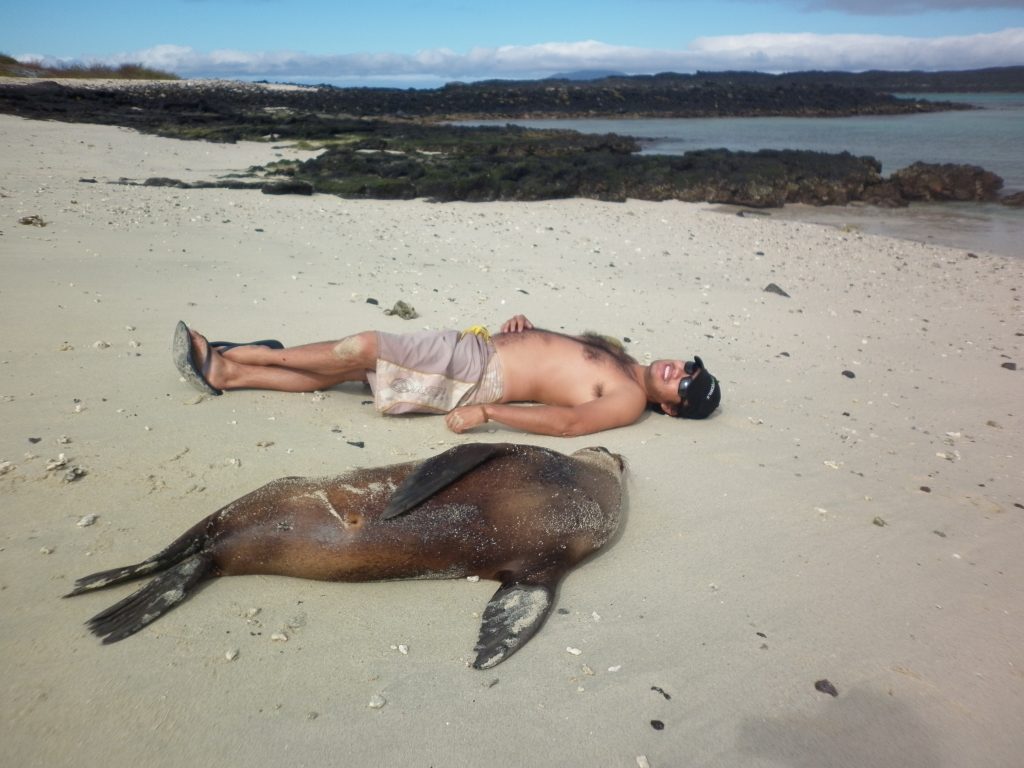 Me lying next to a sea lion 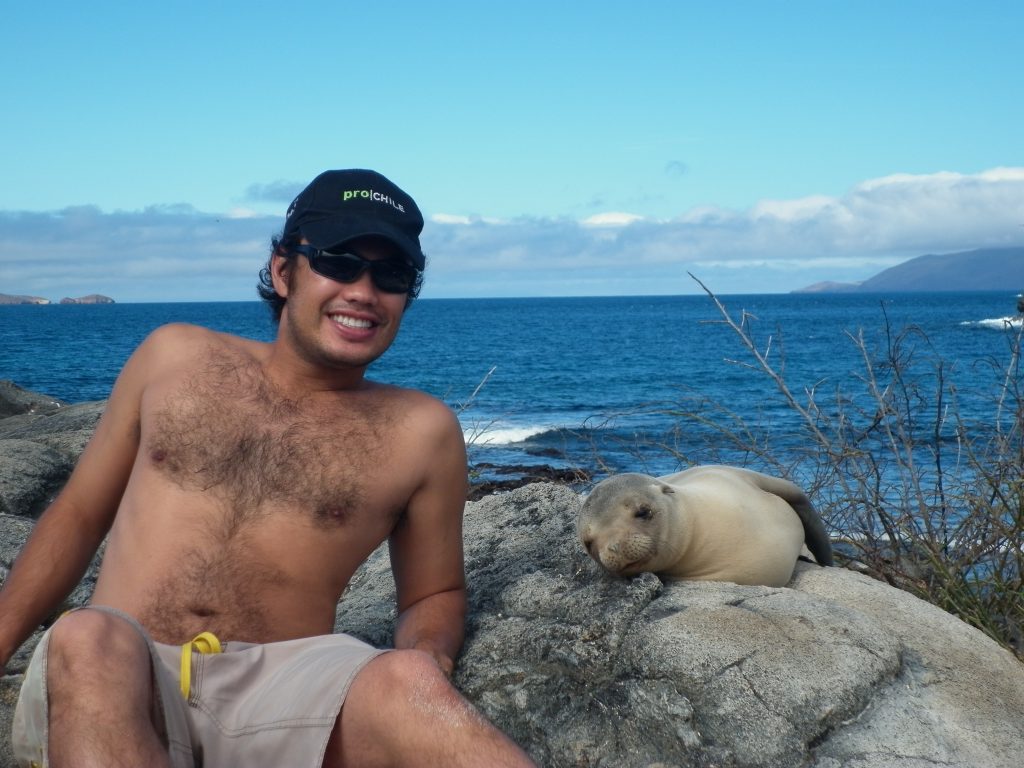 It’s amazing how close you can get to these wild animals!!! 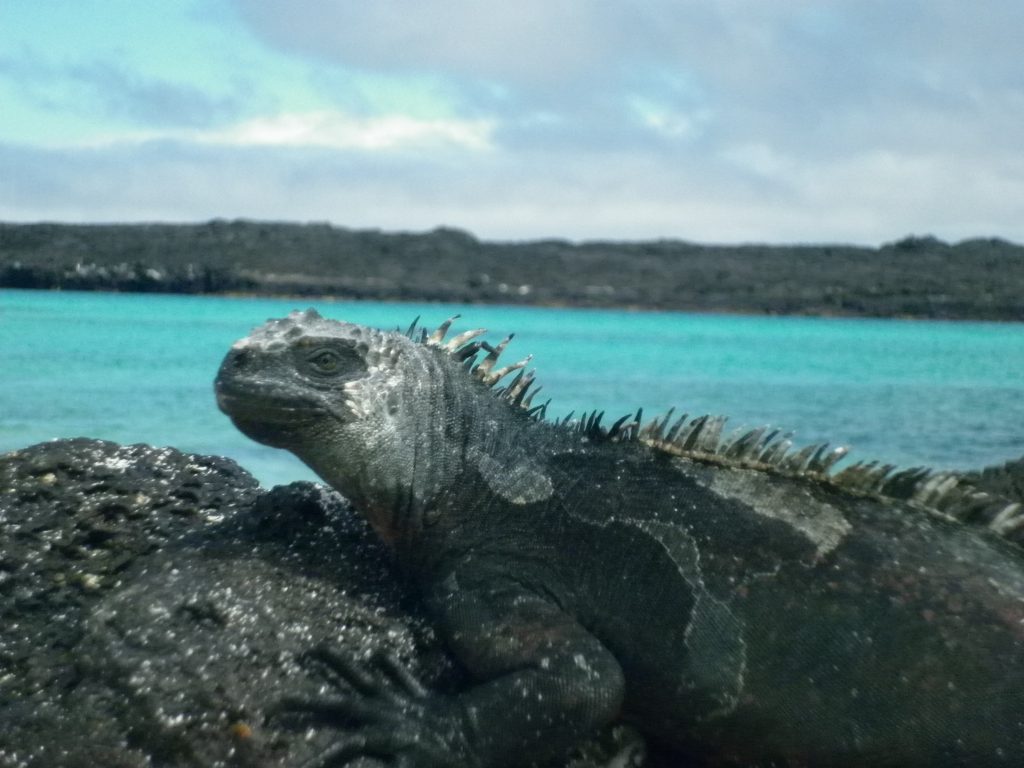 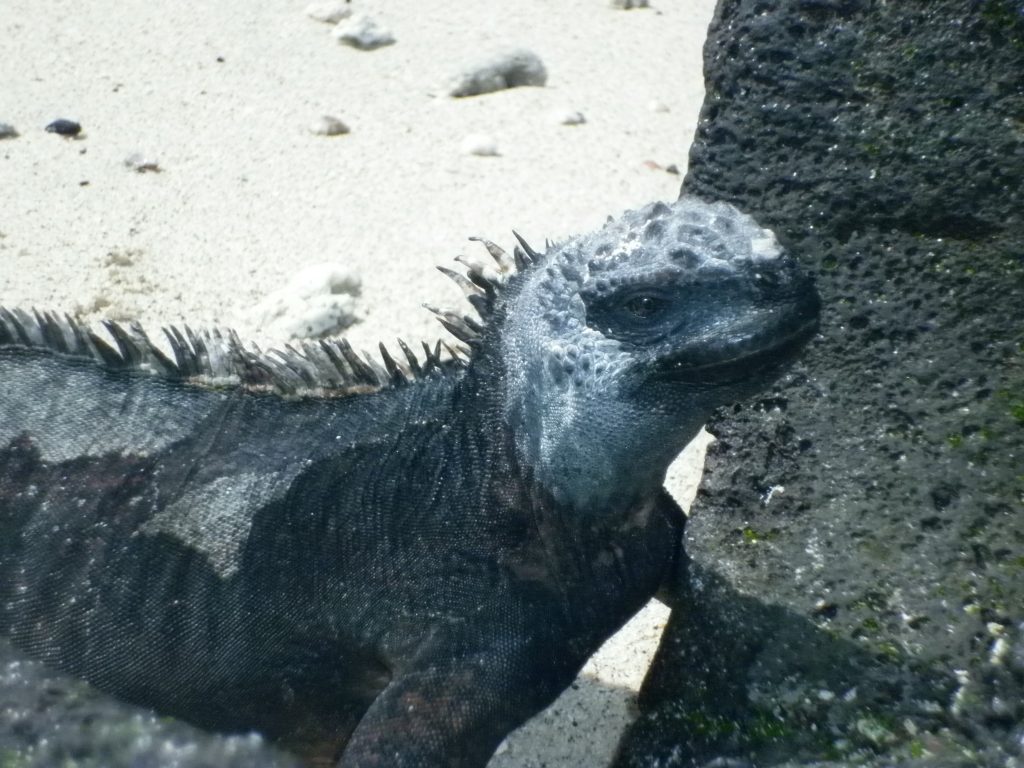 After touring the Chinese Hat Island, the six of us tourists went snorkeling.  What made this exciting were the playful sea lions that we encountered.  We all watched as the sea lions moved like torpedoes through the water, maneuvering between the underwater rock formations, performing loops.  One of them came face to face with me.  As I spun in place, it spun with me and then darted away.  Now that was cool!  Another “wow” moment!
I really enjoyed snorkeling with the sea lions.  As always, I was the last one to get out of the water.  I swam back to the boat, accompanied by one of the other tourists, and then we sailed off to Bartolome Island.  Along the way, we all admired the beauty of the islands that we passed along the way. 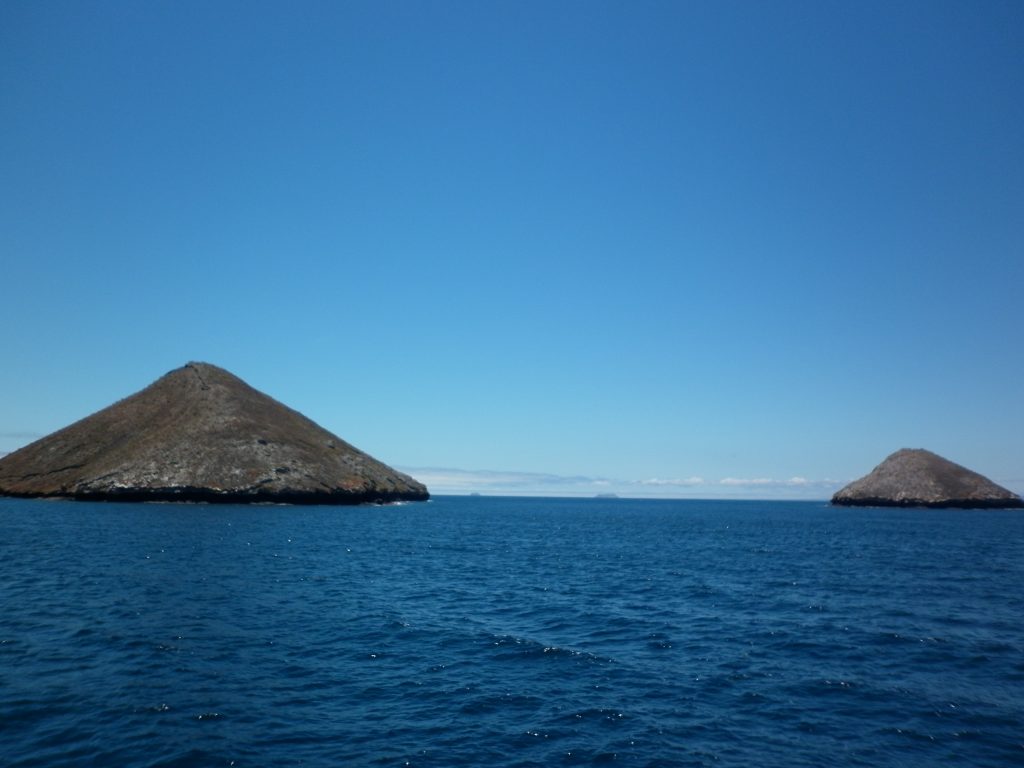 On the way to Bartolome Island, I climbed up to the roof of the boat and took pictures of the frigate birds that flew next to the boat.  They hovered in place thanks the the air currents coming off the boat as it plowed through the water. 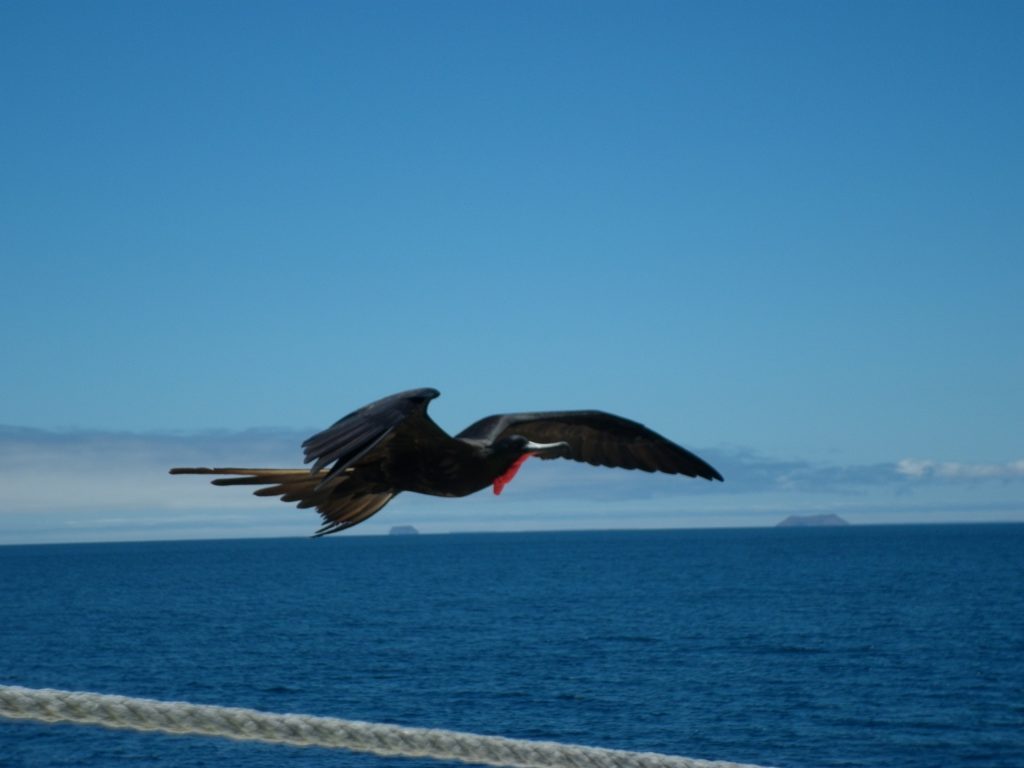 Frigate bird above the port bow

We landed on Bartolome Island by boat to hike to the top of the mountain.  The view was great as you’ll see in the photos below.  The landscape was rocky.  Our guide told us that this was where the movie Total Recall, an Arnold Schwarzenegger movie set on Mars, was shot. 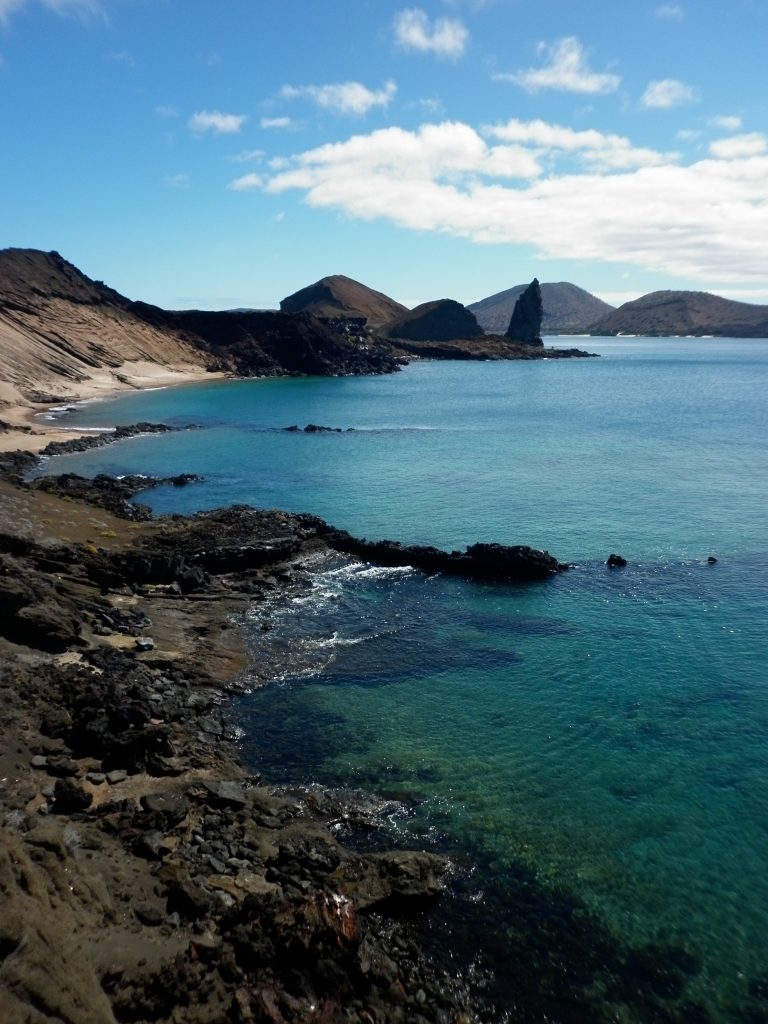 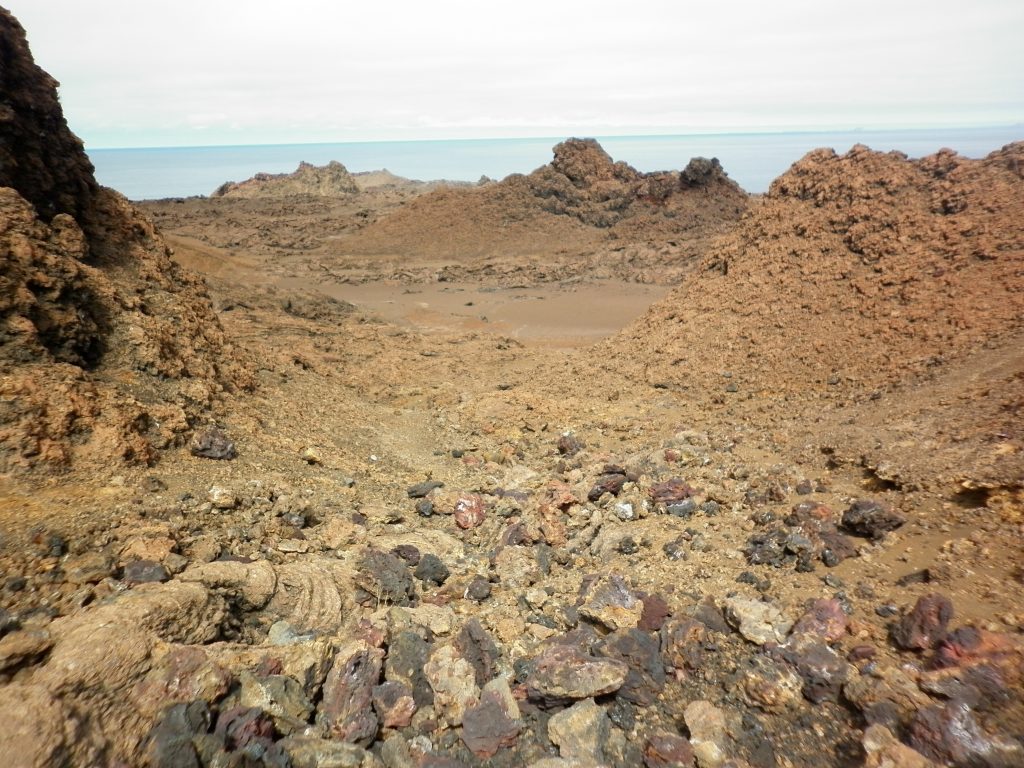 The Martian-like landscape of Bartolome Island 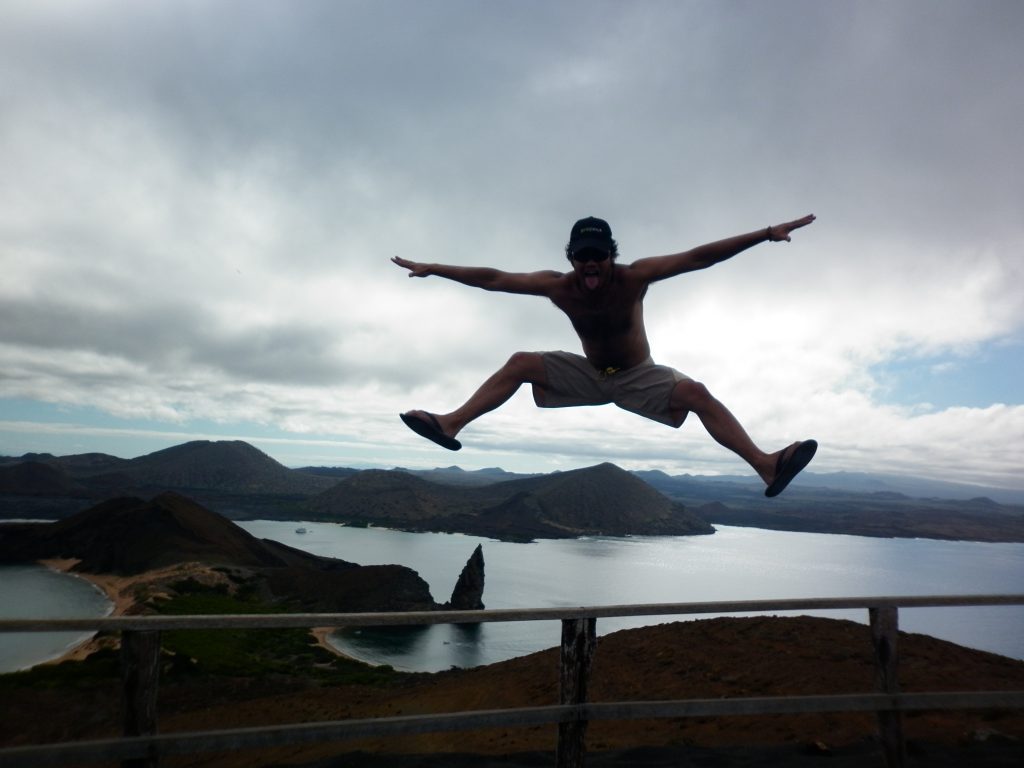 At the top of the volcanic cone of Bartolome Island. Below my right foot is Pinnacle Rock, one of the islands distinct features.

After we descended the volcanic cone, we hopped into a boat to go looking for Galapagos penguins near Pinnacle Rock.  Here’s what we saw: 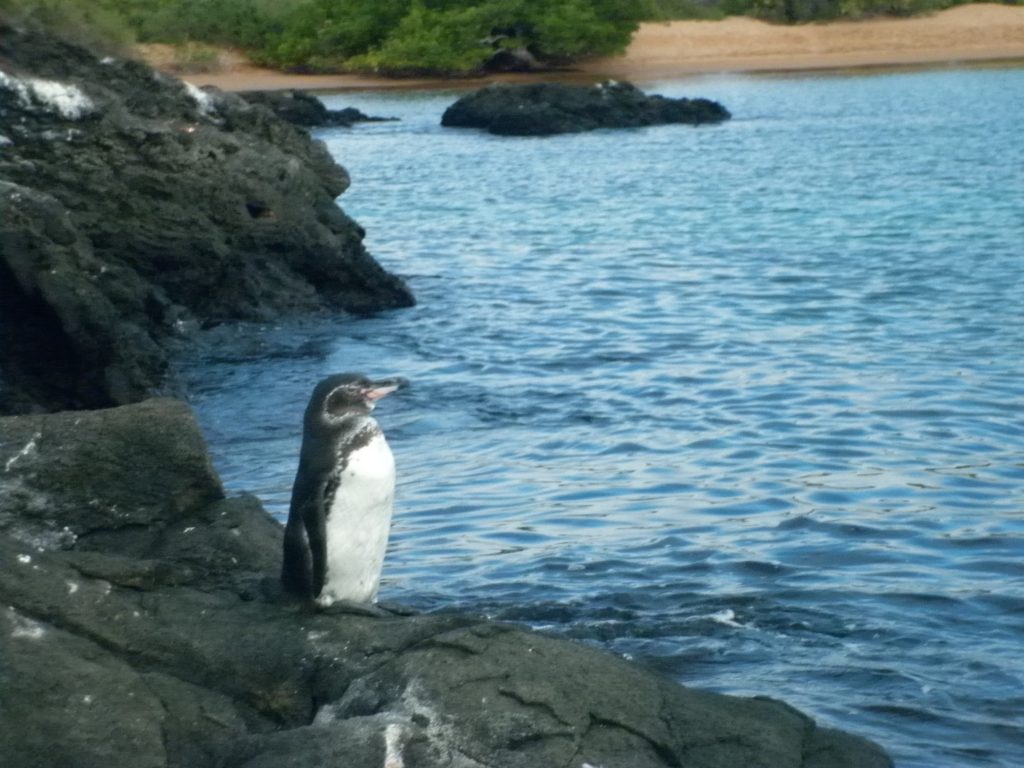 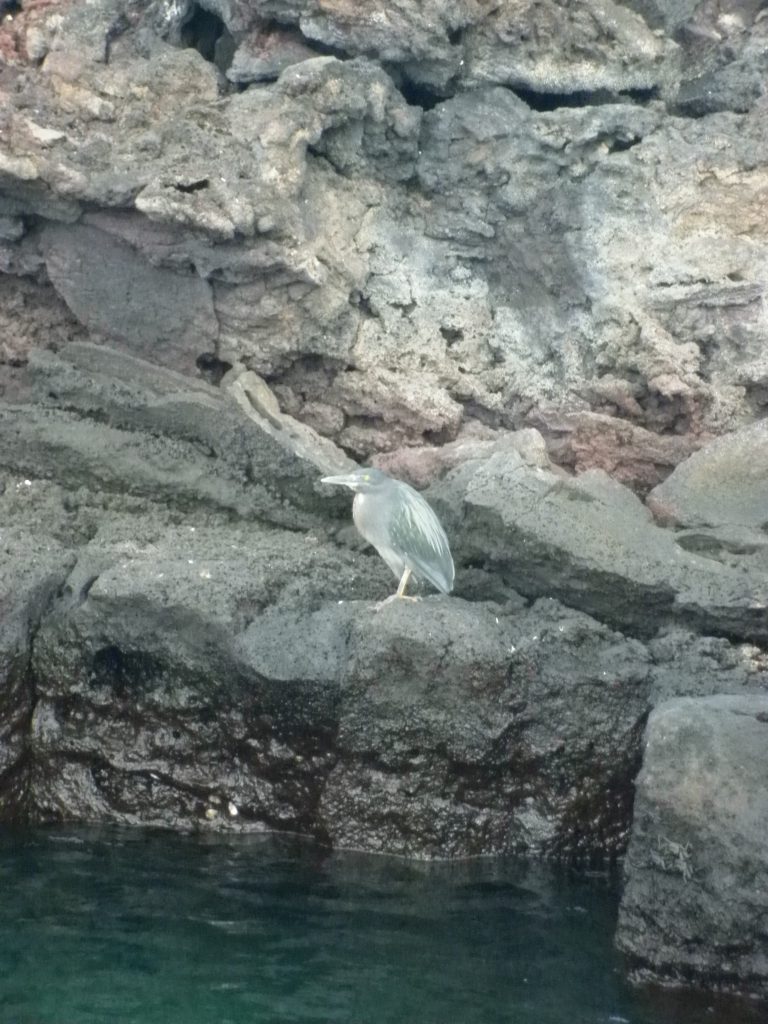 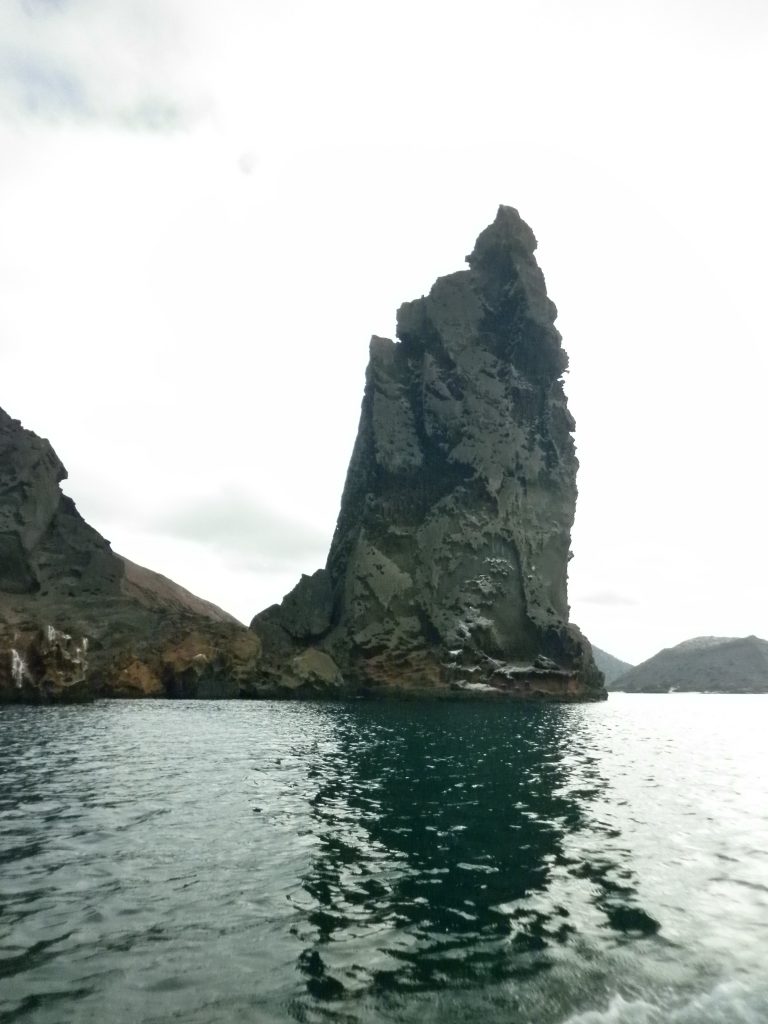 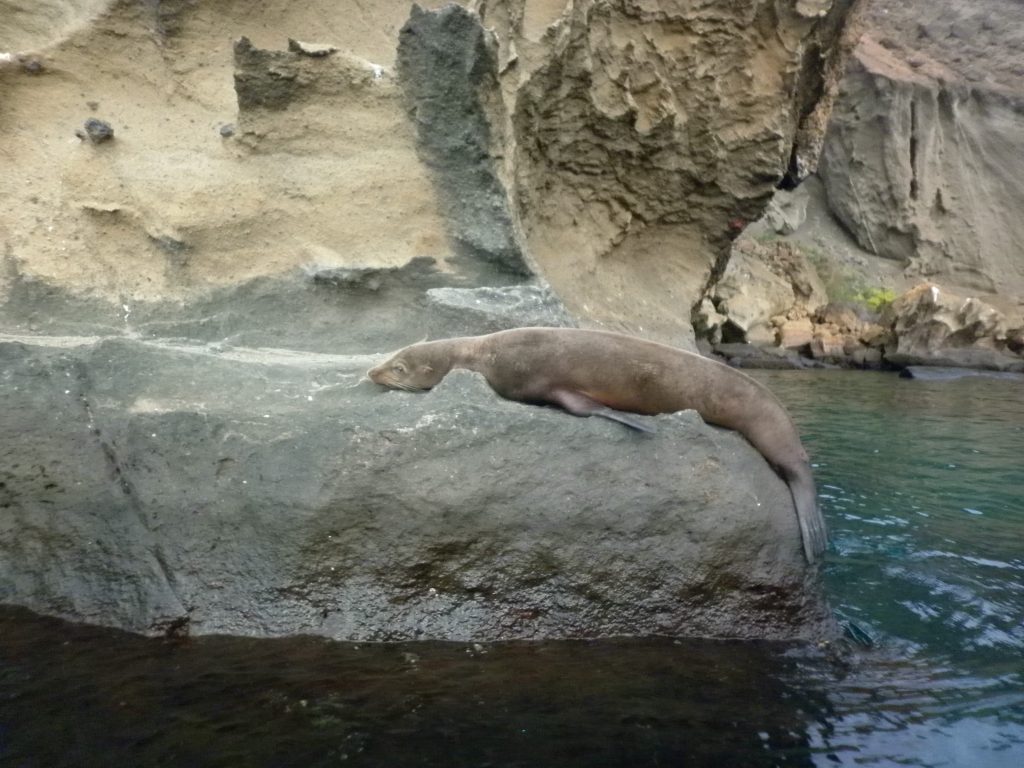 Afterwards, a few of us stayed behind to snorkel in the area.  I swam right up to the Galapagos penguin that we saw earlier from the boat.  While snorkeling, I also saw a sea turtle swim quickly in front of me and disappear just as fast as it appeared.  Later, I swam back to the boat.
Someone spotted a Galapagos shark swimming near the boat.  I asked our guide Hans if they ever attack humans and he said no.  I then grabbed snorkel and fins and jumped back into the water.  I admit that I was terrified.  Everyone on board could hear how hard and fast I was breathing.
Underwater, I saw it.  A huge mass swimming about 15 feet from me.  Did I mention that I was terrified?!  Sure, Hans said this type of shark doesn’t bite, but I still couldn’t keep my cool.  I was hyperventilating.  I watched as this gigantic Galapagos shark swam near me and then away it went.  My breathing slowly returned to normal.
I had just swam with a shark.  Wow! 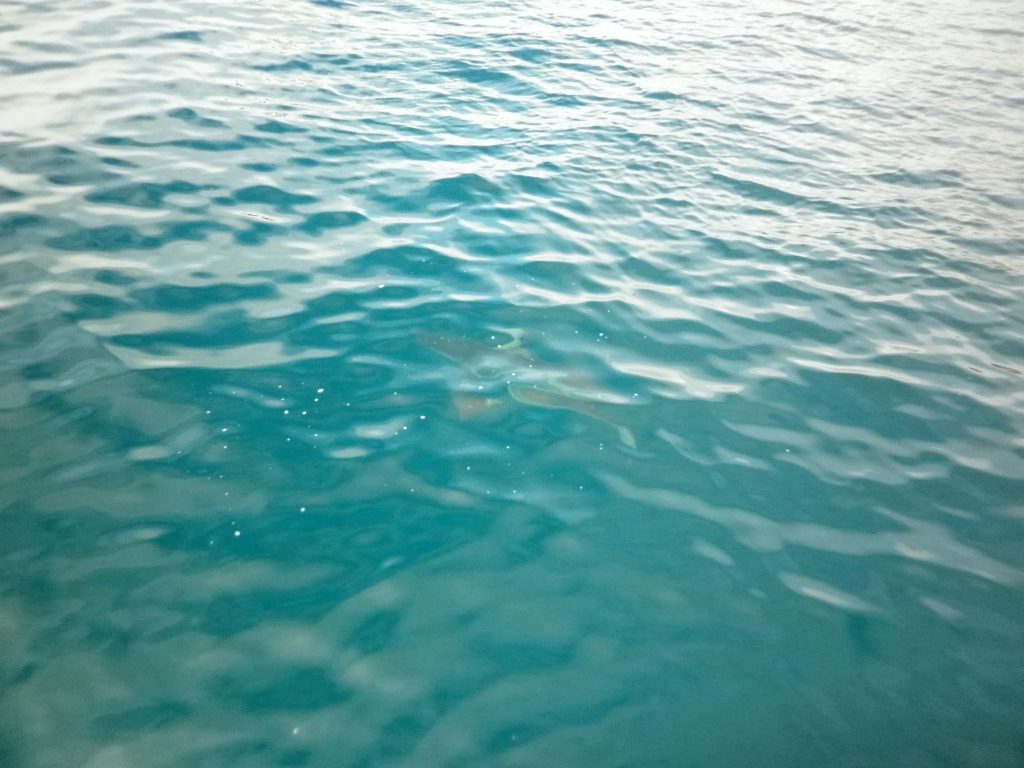 The Galapagos shark, just before I jumped into the water to play Marco Polo with it. 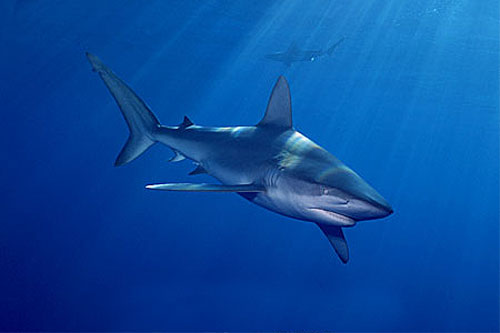 This is a better picture of a Galapagos shark that I copied from the Florida Museum of Natural History Icthyology Department's website.