Life and lemons on Rapa Nui.

Sometimes things work out even better when a plan falls apart.  There’s always opportunity.  Case in point:  it was last Tuesday, May 10, 2011, when I started off in the morning for a day-long hike from my campsite at Mihinoa on the south side of Easter Island all the way to Anakena beach in the north.  My plan was to hike out there, enjoy the beach, and hitch-hike back.
The early part of the hike was beautiful.  I saw a couple of Rapa Nui statues, called moai. Apart from the herds of horses next to the trail backdropped by the deep blue ocean, it was a lonely hike. 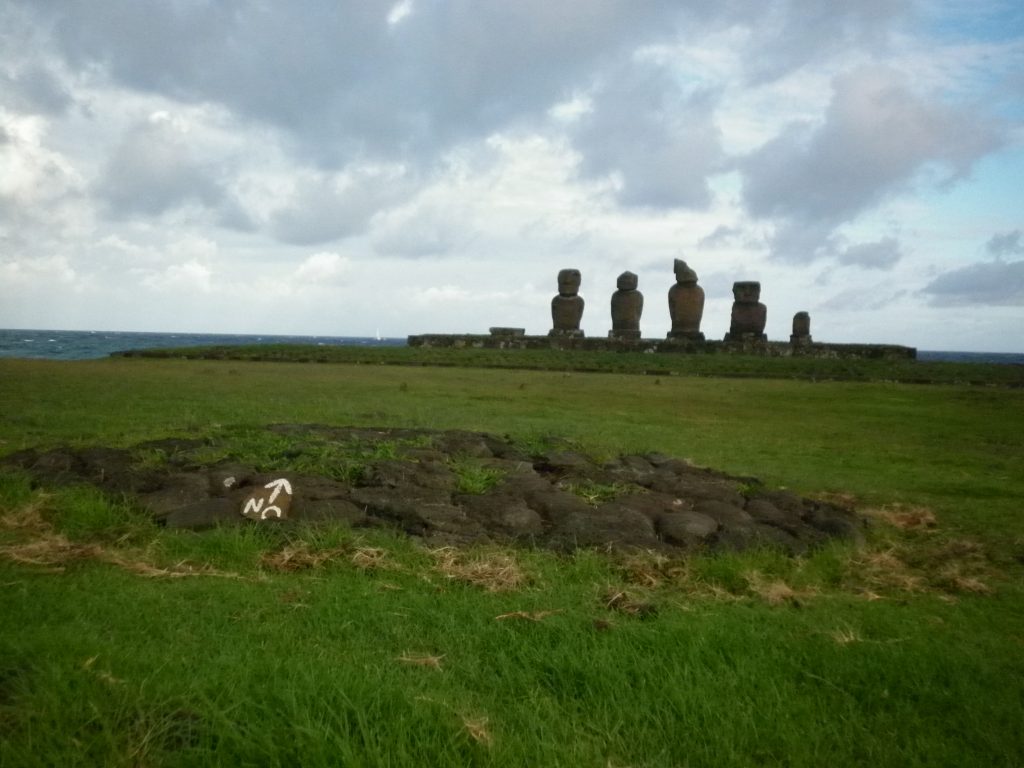 Rapa Nui moai, the statues that make the island a world heritage gem 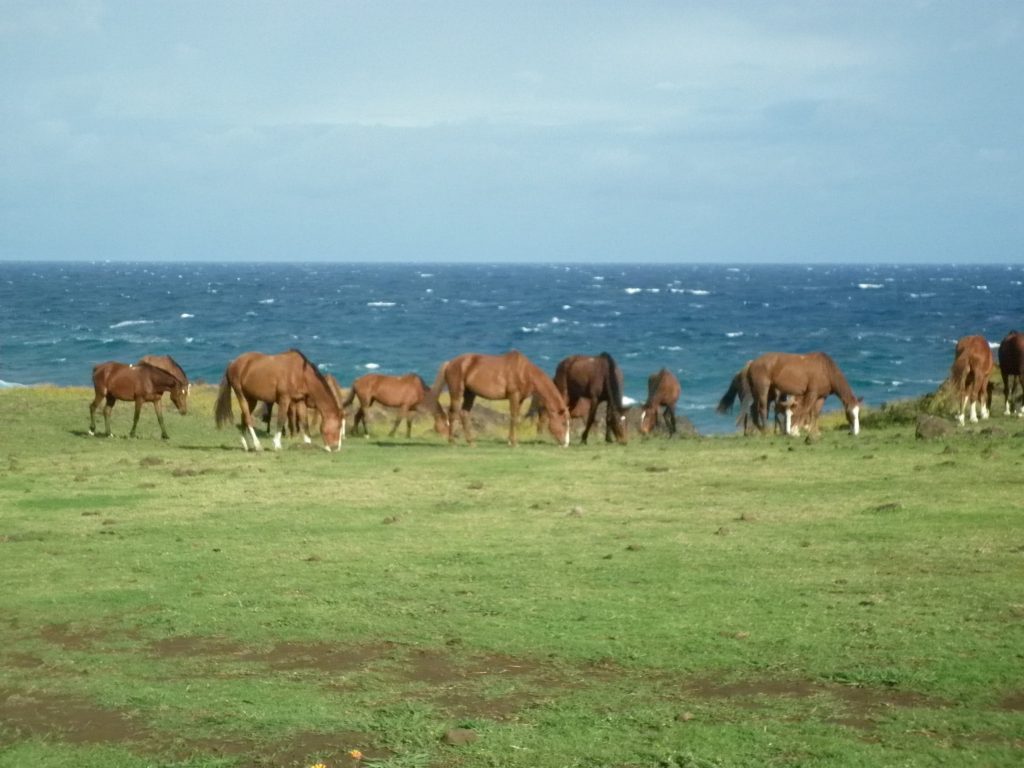 I stopped to explore a small lava tube that had created a cave.  There was a brown sign that explained the historical and cultural significance of the lava tube.  The early Rapa Nui people used to hide in the caves during times of war.  I took my small flashlight and walked through one of them emerging through a small opening approximately 30 feet from the entrance.  Cool enough, I thought.  Time to move on. 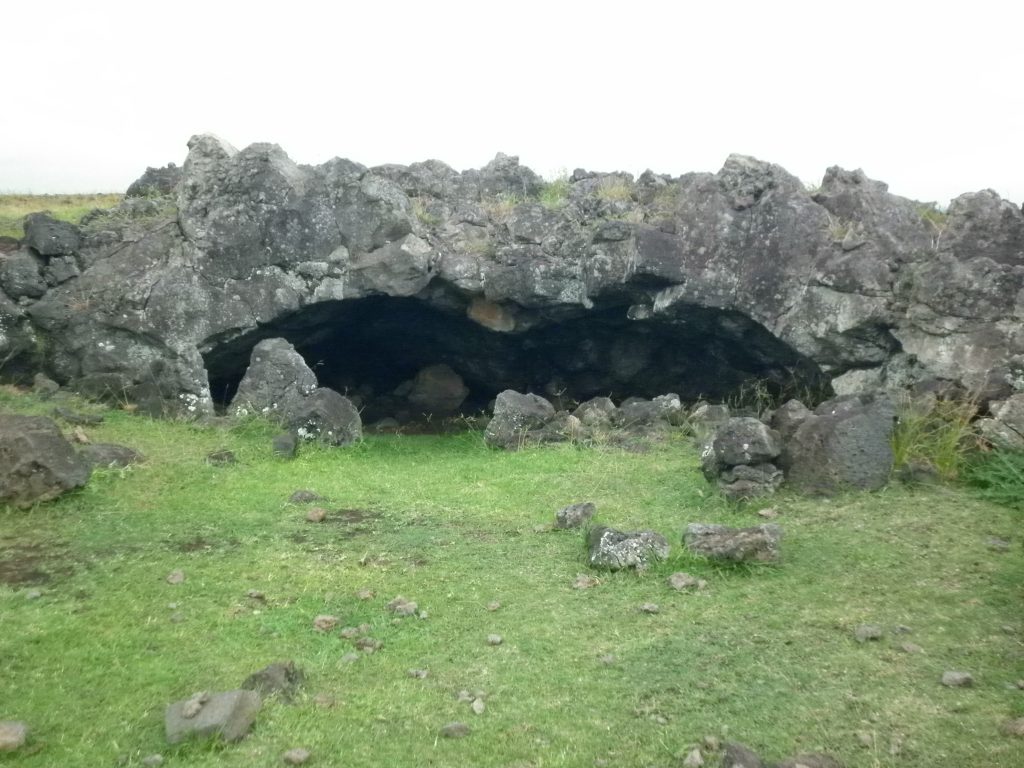 At one point, I had to stop and nurse a hot spot on my foot that was developing from the friction in my boot.  I took my water bottle, tore off a piece of duct tape that I had wound around the water bottle, and applied it on my foot.  When I looked out onto the ocean, I could see a storm cloud approaching, a vertical, gray shadow of torrential rain connecting the ocean with the cloud.
I saw that I was near a farmhouse so I made my way there to ask its inhabitants if I could take shelter there rather than press on with my hike and get drenched.  I could’ve also taken shelter in a lava tube- Hey, if it’s good enough for the early Rapa Nui, it’s good enough for me!
I had no idea what to expect at the farmhouse and decided to give it a try.  As I walked to it, I saw a red truck parked in the yard.  Surely someone was home.  I came to the house first and saw that it was empty.  I then walked to the truck and could hear people working in the nearby shed.  At the shed, I called out, “Hola?”
A barefooted man in torn jeans came out.  I told him I was hiking and saw that the rain was coming.  I asked if I could stay with them to wait for the rain to pass.  He said that was fine and that I could just go and wait in the house.  “Gracias,” I said.  I asked him what his name was, and he said, “Pepe.”
I went to Pepe’s house unaccompanied.  It was clearly a bachelor pad from the looks of it.  But for protection from the rain, it was more than sufficient.  I sat down on the living room couch and took out my Kindle to read and pass the time. 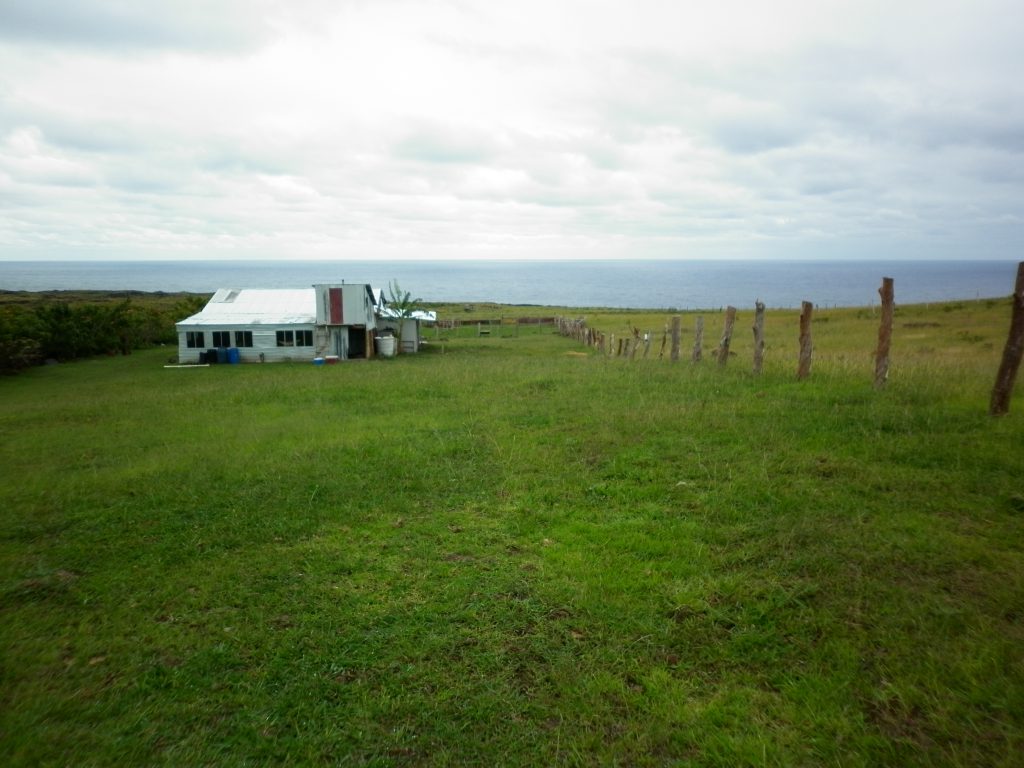 Pepe came in after about 15 or 20 minutes.  He was with his cousin, Jose, who wore a blue bandanna on his head like a Los Angeles gang member.  The rain came down in a torrent.  I could hear every drop since the roof was made out of thin corrugated metal.
It was about 2 pm when the sky cleared up.  They asked me if I was still going to Anakena, and I said probably.  They told me they didn’t think I had enough time to get there unless I planned on running there.  Now I’m not sure how the conversation continued after that because my spanish comprehension is still lacking, but I ended up going fishing with them for the afternoon.
We all hopped in the Pepe’s red truck and drove on some Rapa Nui backroads that were barely roads.  Some of the land was fenced and gated in.  Jose had to get out to open gates a couple of times.  As we drove, we came across some other Rapa Nui locals who had their car stuck in the mud.  Pepe drove up to them and we waited while someone brought a rope to tow the car out of the mud.
A Rapa Nui guy galloped up on a horse with a rope.  The two vehicles were attached and the car was free moments later.  We drove on. 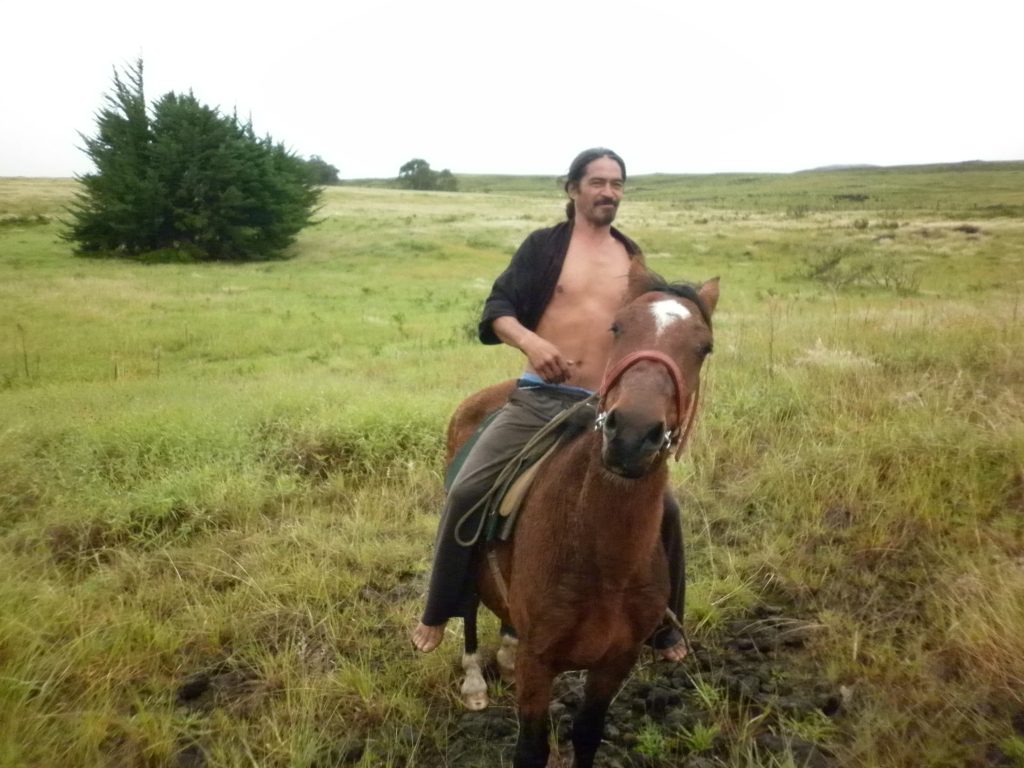 The landscape that we were on was marvelous.  We were driving on a bare hill strewn with large lava rocks.  There were very few trees so the view of the ocean was unobstructed.  Except for me and my new-found Rapa Nui friends, it felt like were the only people on the island.  We drove by several ahu, which were piles of stone that Pepe and Jose’s traditional ancestors had built for burial purposes or to erect the large statues, or moai, that are so unique to the island. As we drove to Pepe and Jose’s secret fishing spot, I was very much aware of the fact that seeing this part of Rapa Nui in this way is something 99.9% of tourists don’t have the opportunity to do. 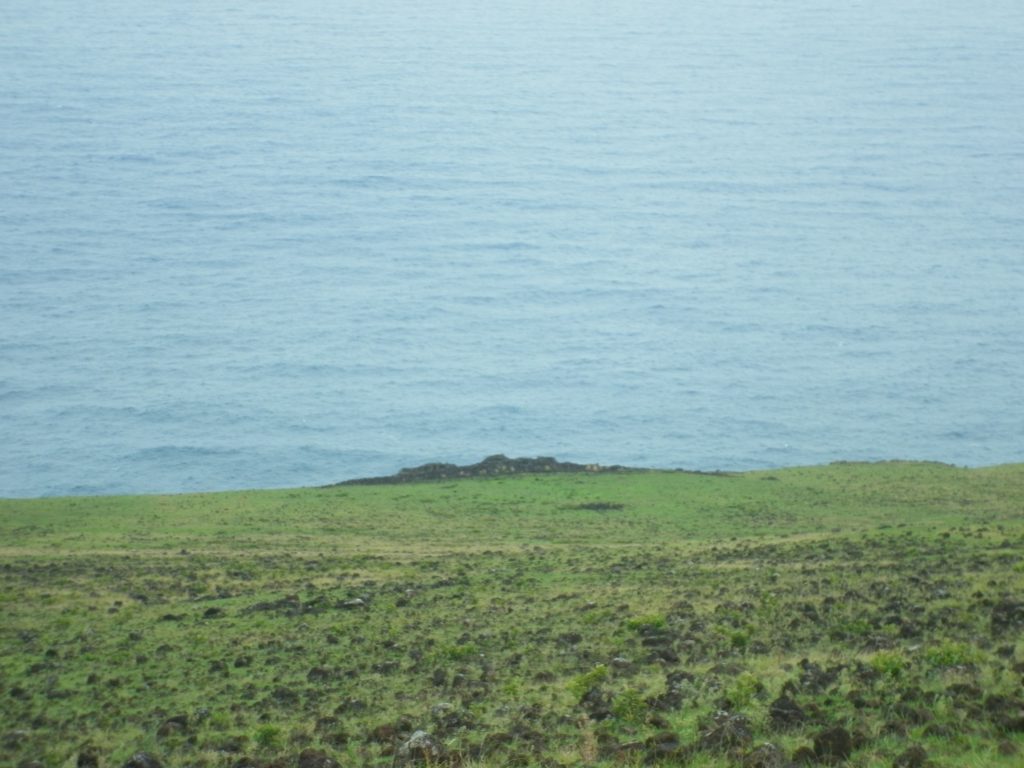 We finally arrived at the secret fishing spot.  Waves smashed onto the rocks violently, sending water into the air with each thunderous crash.  The overwhelming amount of activity was reminiscent of a grand finale of fireworks on the Fourth of July. 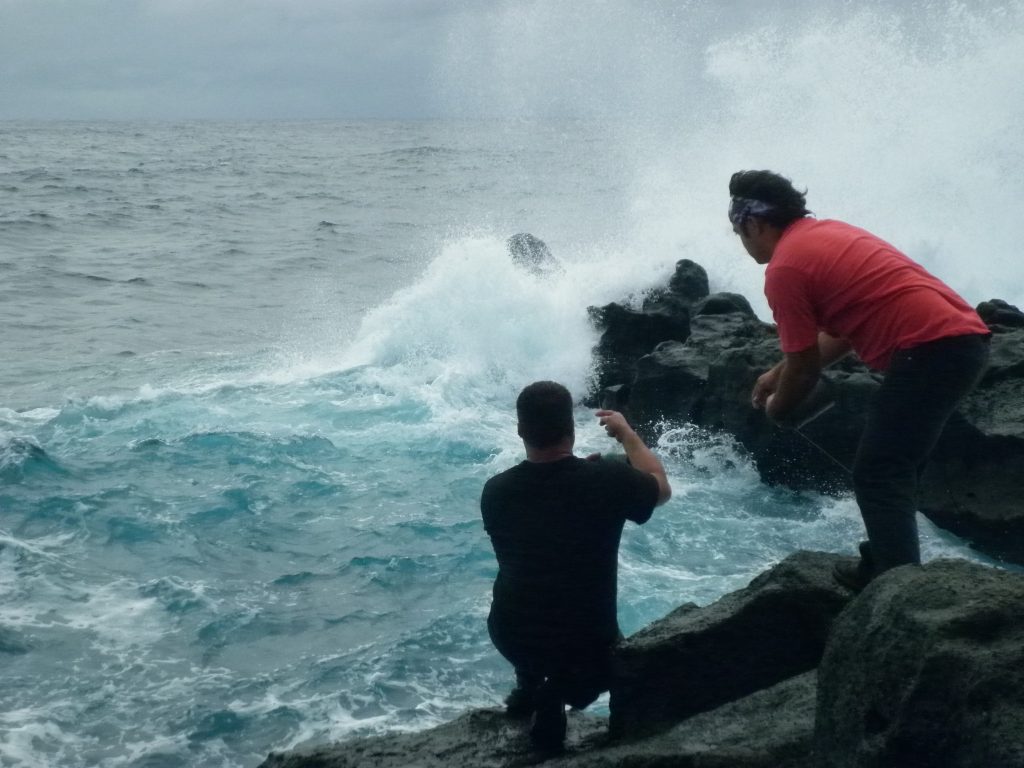 My friends bit off pieces of raw chicken, baited their hooks, and ventured far out onto the rocks with their hand reels, which amounted to nothing more than pieces of PVC pipe with fishing line wrapped around them.  I admit that I was reluctant to follow them onto the rocks.  What if I lost my footing, slipped and fell into the ocean?  I had to watch them pass back and forth a couple of times before I followed them.  Once I did, it felt perfectly safe.
I watched as Pepe and Jose whirled their lines in the air before casting them.  Jose proceeded to catch five fish, placing them into shallow tidal pools next to his feet.  We ended up calling it quits after five fish because Jose lost his hook while trying to snag a backpack that was floating in the water. 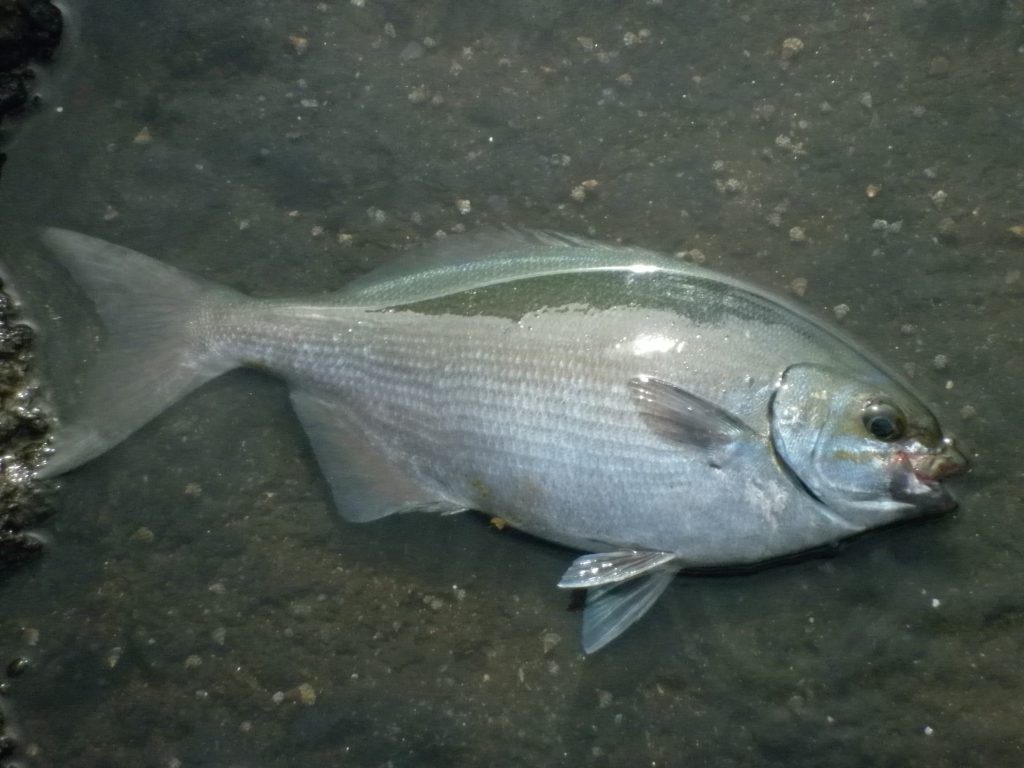 We climbed back up the rocks and hiked up the hill to the truck to drive back home.  There we cooked up the fish and ate it with rice.  Our appetizer was chicken and crab soup, the chicken having been the leftover bait that wasn’t used for the fish.  It was all delicious, my first real substantial meal on Easter Island.  Prior to that, I’d been cooking my own food which was nothing compared to what they cooked.
After dinner, Pepe and Jose drove me back to my campsite.  I never made it to Anakena, but I had a great time spending the afternoon with Pepe and Jose.  I asked Pepe if he had any friends who I could rent a horse from.  He said he had some and we agreed to do business future.  It was a great day.  I made new friends, took care of business, and got to experience a day in the life of two Rapa Nui locals.  As the saying goes, “When life throws you lemons, make lemonade.”  Had that rainstorm not come, I wouldn’t have had such an awesome experience with Pepe and Jose.

This entry was posted in Chile and tagged Easter island, Rapa Nui. Bookmark the permalink.