I don't know how to ride a horse, but I can fake it pretty well.

It was May 13, 2011.  I was still on Easter Island, Chile.  I had arranged to rent a horse from Pepe, the local Rapa Nui who I befriend two days earlier.  Rather than go through a formal tour operator, I thought I’d be wise to side-step the middle-man and go directly to a supplier of horses.  By arranging it informally, I know I could get exactly what I wanted:  a horse and the freedom to explore the island unsupervised.  The deal I got from Pepe was decent, $40 USD for an entire day unsupervised.  For the same price, you can get 3-4 hours on a guided tour up Maunga Terevaka, the highest point on Easter Island.
I had asked for Pepe to come pick me up at the campground at 9 am; he showed up sometime around 9:45 and 10:00 am.  I was hoping he’d come earlier because I knew I had a lot of ground to cover during the day, but the cultural concept of time is drastically different in South America than in the U.S.  As a foreigner, it’s important to accept this fact lest one be constantly frustrated with every minute past an expected time.
We rode via motorbike to Pepe’s farm.  While there, Pepe and a buddy, corralled one of the horses so they could put a saddle on it.  Pepe assured me that this was a strong horse that could carry me up Maunga Terevaka, the highest point on Easter Island at 1664.73 ft.  Good, I thought.  I’m going to ride the hell out of this horse and see everything on Easter Island.

As soon as I mounted Pingo and headed towards the road, Pingo started on a fast trot.  This horse was a lot more robust than the docile horse I had ridden a week and a half earlier on a tour with my class at Las Cascadas Resort, outside of Santiago.  Once we got to the rode, Pingo took off on a runaway gallop.  My right foot slipped out of the stirrup and I struggled to gain control of Pingo as we careened off into a field next to the road.  I thought to myself, If I fall off of this horse, I’m going to be in BIG trouble. 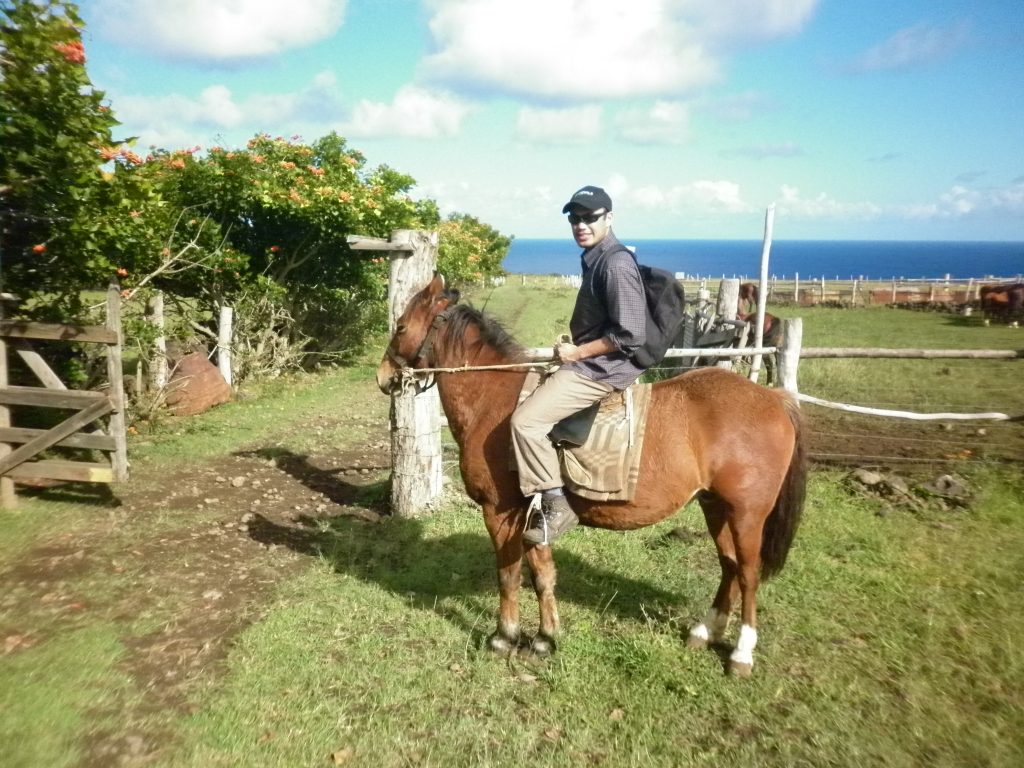 Heading out. This was just before Pingo's runaway gallop and subsequent power struggle.

I pulled the reins with all my might to get Pingo to stop.  Finally, I got him under control.  I put my foot back into the stirrup.  As soon as I loosened the reins, he started galloping again!  It seemed the entire way leading up to our ascent up Maunga Terevaka was a power struggle!  “Slow down!,” I yelled each time he tried to runaway beneath me.  At one point, I had even considered returning Pingo to exchange him for a slower, more docile horse.
The way up Maunga Terevaka is a lot more complicated than it looks.  Although much of the island is rocky grassland, it’s crisscrossed with private fences.  Luckily, I encountered a Rapa Nui man named Chino who showed me the way.  We trotted together for a little bit before parting ways so that I could begin my ascent.  As we trotted, he could see how robust Pingo was and complemented on how fine a horse Pingo was.
The steep climb up Maunga Terevaka was a welcome respite from the runaway galloping that Pingo was so inclined to do.  As we climbed, I could see the great, blue ocean below, the grassy plain of the island, and Easter Island’s only town, Hanga Roa.  The sky was clear and sunny; the breeze was comfortable.  How lucky I felt to be there at that moment – and more especially so as we finally made it to the top of Maunga Terevaka. 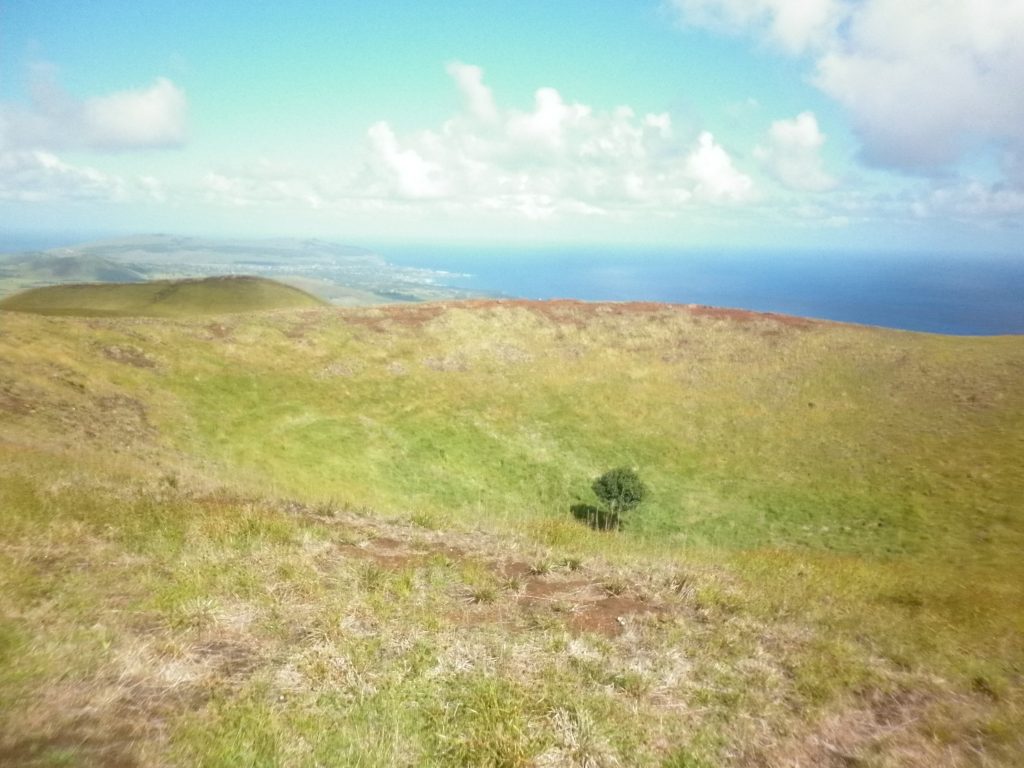 The crater at the top of Maunga Terevaka. It's actually an extinct volcano.

The top of Maunga Terevaka gave me a 360 degree panorama of the largest terrain features of Easter Island: the Poike Peninsula, Hanga Roa, and Rano Kau volcano to the south.  There isn’t much to the island as it is only 15.3 miles long and 7.6 miles wide. 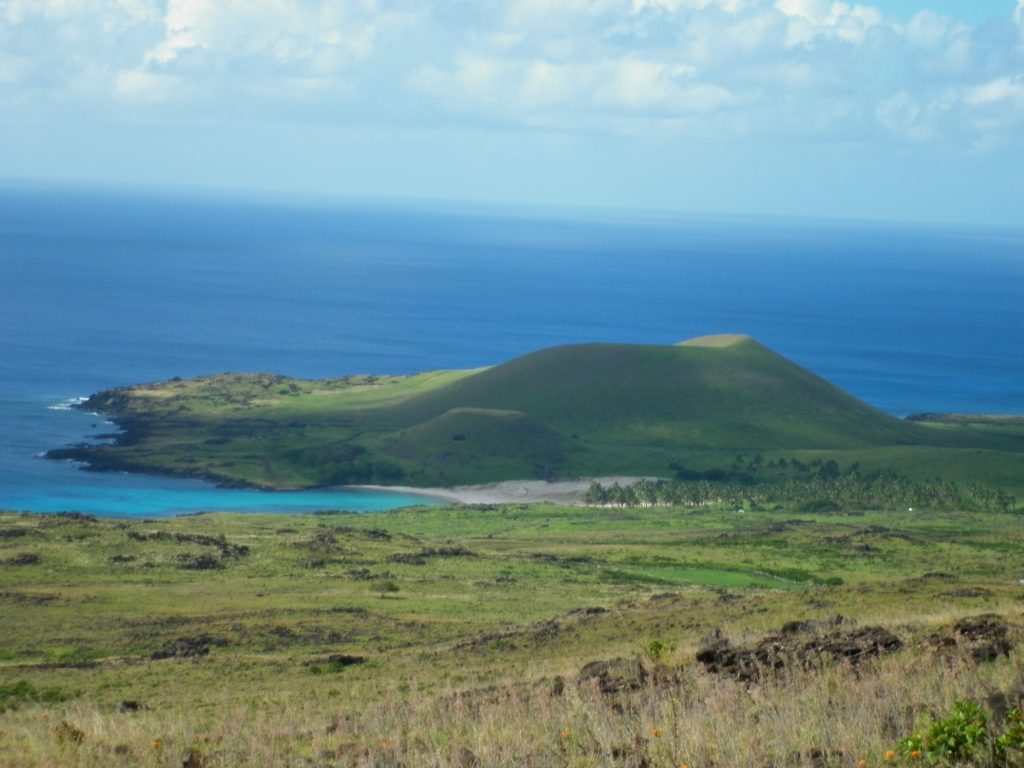 The bright blue water at Anakena beach and the Poike Peninsula behind it.

I descended the northeast side of the mountain towards Anakena.  We walked on the beach, admiring the bright blue color of the water and the white sands, until we got yelled at by one of the staff there.  I had read the sign that said “No recreational vehicles allowed,” and I thought nothing of it because I didn’t consider a horse to be a vehicle in the same sense as an automobile or a motorbike.  That was fun while it lasted.  Besides, I was getting a little bit frustrated with Pingo because, for some odd reason, he kept wanting to turn left.  A crazy horse he was! 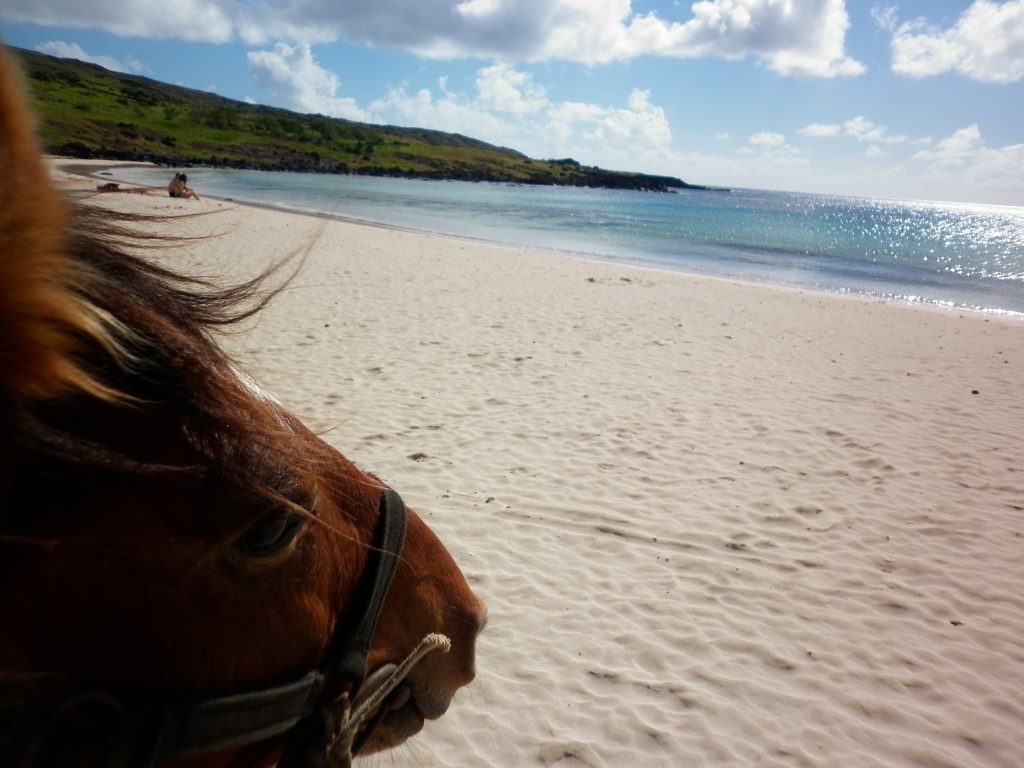 We stopped to talk pictures at the moai before galloping away, following the road that led across the Poike Peninsula.  At this point, both horse and rider interests were aligned with one another.  We encountered buses and cars full of tourists heading in the opposite direction.  We galloped even faster as we approached them.  We were quite the spectacle!
We made our way to Ahu Tongariki, the site that had 15 moai.  As I dismounted to tie Pingo up to a post near the entrance, I heard a French woman ask her husband if I was also a tourist or a local Rapa Nui.  She undoubtedly figured it out as I walked down to the moai to take pictures. 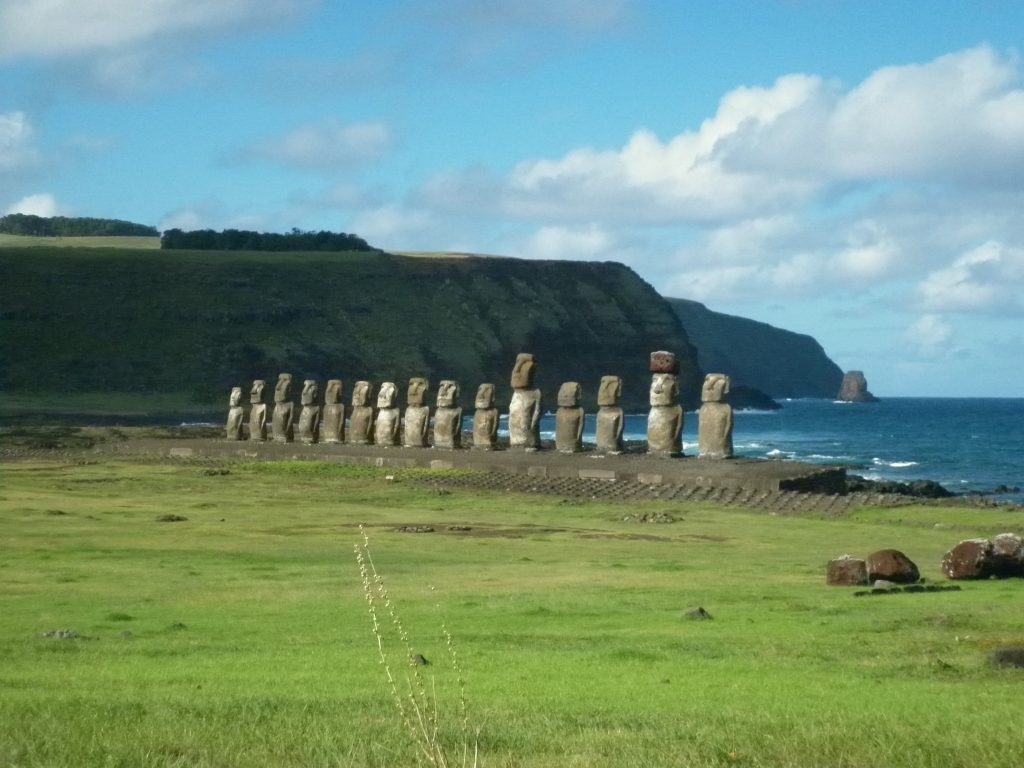 Because of the approaching sunset, Pingo and I had to skip the quarry, which is one of the highlights of the island where the Rapa Nui would construct the moai.  We tried to gallop/trot all the way back to Hanga Roa.  Night came.  By the end of the day, both Pingo and I, were thoroughly exhausted.  He didn’t want to run anymore, and I no longer wanted to be in the saddle.  I had to dismount and pull him behind me.
We finally made it back to the campsite at Mihinoa where I was staying.  We both drank copious amounts of water.  Back at Anakena, I refused to pay $3 for a 500 mL bottle of water so I was very parched.  Pepe came for the horse.
I made dinner and fell asleep on a bench in the kitchen.  I was sore for days from all that cabalgata, but it was well worth it.  It would’ve been nice to have someone there to whom I could express the incredible sensation of being on a horse on top of Easter Island, but that comes with the territory when traveling solo.


View Larger Map
This entry was posted in Chile. Bookmark the permalink.