When I first arrived in Puerto Mont on the morning of May 18, 2011, via an overnight bus from Santiago, I was the only staying at Casa Perla, a small hostel located near the bus station.  An e-mail from the Navimag company later that afternoon said that due to poor weather, my Friday departure date on the ferry to Puerto Natales in the Patagonia would be delayed until the following Monday.
That gave me extra time to explore the nearby island of Chiloe.  The weather was cold and rainy and I wasn’t really all that motivated to make plans to do anything.  Not too long after I had arrived, a Scot named Marnoch showed up.  It was good to have company and someone to talk to.  Later that night, a Chilena named Santiago named Javiera also arrived at the hostel.  Javiera was on vacation for a few days and had plans to also visit Chiloe.
The following day, Javiera, Marnoch, and I went day-hiking in Parque Vicente Perez Rosales.  It rained the entire time, but we had made a pact the night before to go hiking regardless of what the weather was doing.  After our hike, we went to Puerto Varas and hung out a little bit before going back to Puerto Mont.

Javiera in Parque Vicente Perez Rosales (but I think it looks more like JRR Tolkien's Middle Earth or Narnia!)

Back at Puerto Mont, Kayla, an American showed up.  She was living in Buenos Aires, Argentina, but was traveling through Chile at the moment.  Her plans were to visit Chiloe over the next few days, too.  So now our small ad hoc band of travelers had increased by one more!  The next day we took the ferry to Chiloe and stayed at a lovely hostel called Nuevo Mundo in Ancud.
Chiloe is famous for its mythology, its UNESCO-designated wooden churches, its houses on stilts, called palafitas, and its delicious seafood. 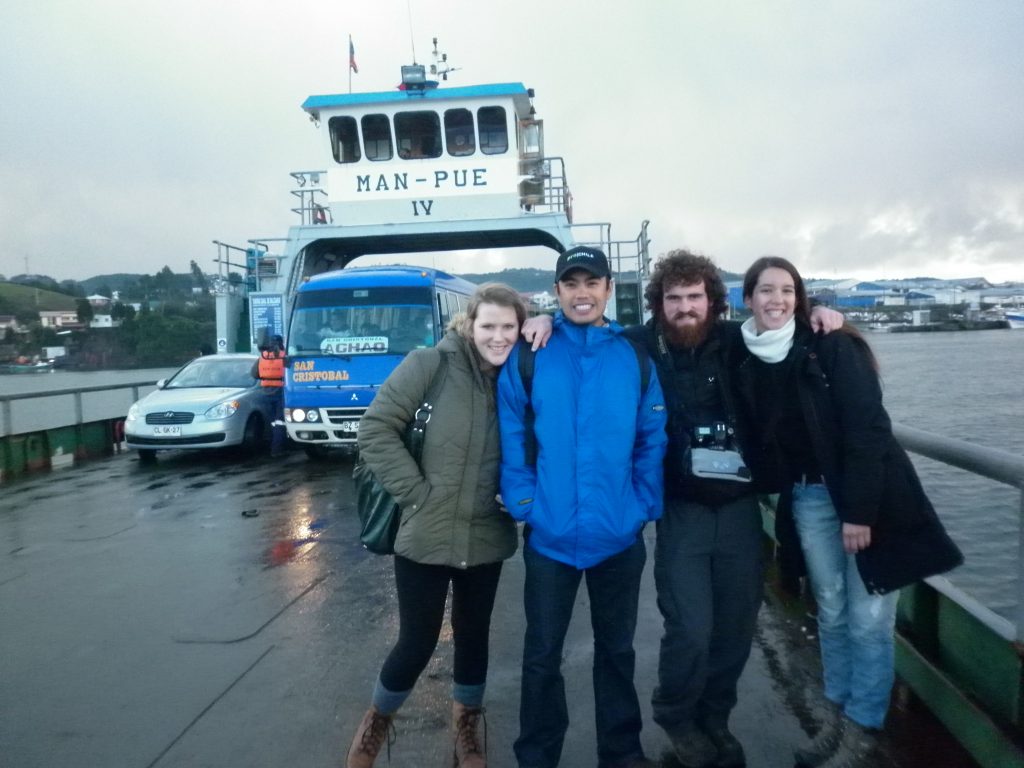 On the ferry to Achao, Chile (left to right: Kayla, Joey, Marnoch, and Javiera) 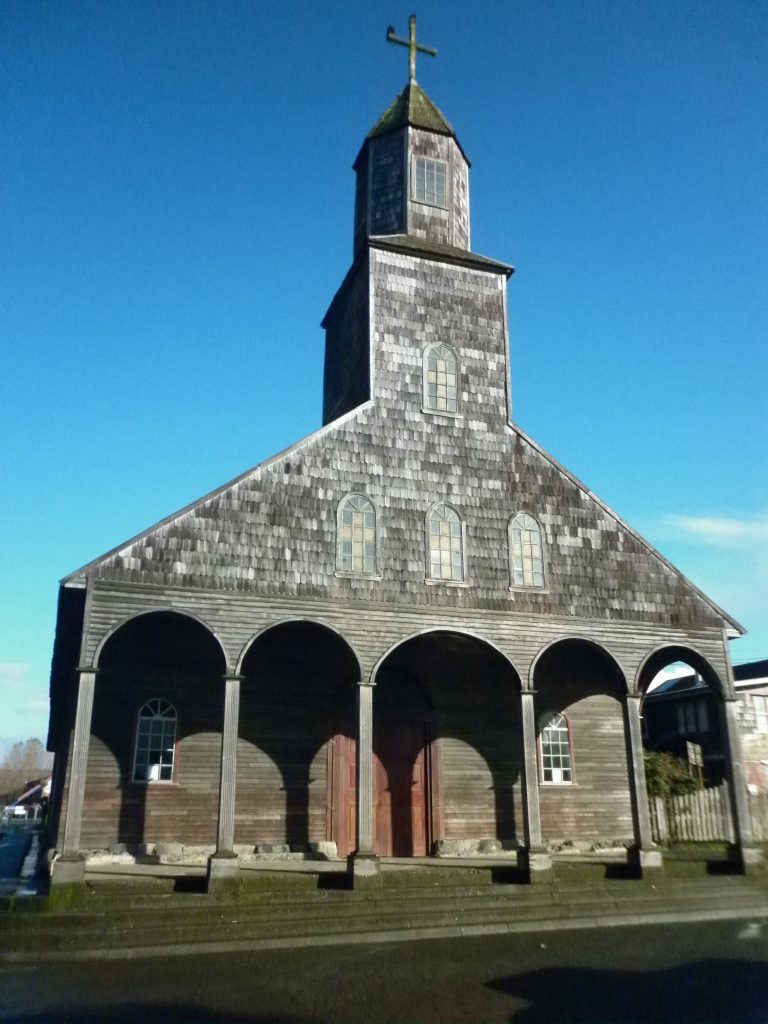 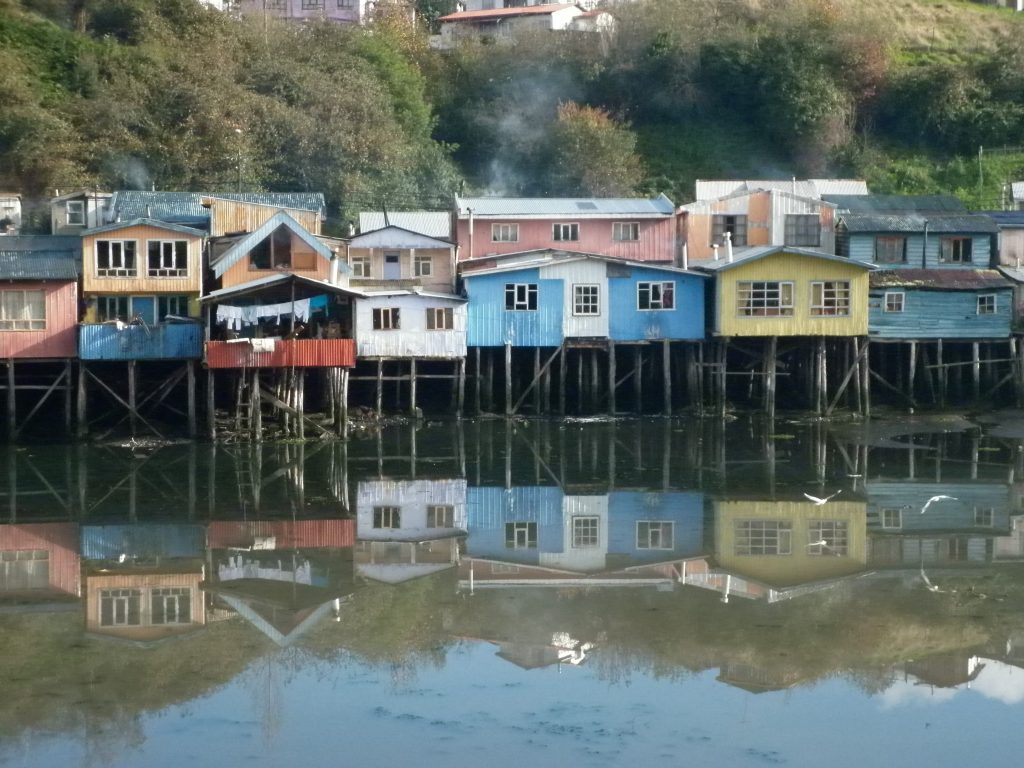 I found that the cities that we visited, Ancud, Castro, Achao were all very picturesque, small, sleepy towns with a wooden church.  My favorite part was going out for drinks and dancing on the last night that we were there on May 21, 2011.
We couldn’t find a place that was open initially.  We wandered the streets in Castro until we heard the sound of music.  We followed that sound and found a karaoke bar full of Chilenos.  The fun thing about Spanish karaoke is that you can fool people into thinking that you really know Spanish as long as you know how to read.  I always have a blast when I read Spanish karaoke.
Our group ordered a tall cylinder of beer and sang to our hearts’ content.  A large group of Chilenos, about 6 girls and 3 guys, invited us to sit with them and so we obliged.  Later, Kayla and I went dancing with them and didn’t get home until late.  Earlier, we had decided against going to that club because we heard there were fights there, but we felt safe since we were with Chileno friends.  I’m glad we went because that was one of the highlights of my visit to Chiloe.
I boarded the Navimag ferry in Puerto Mont the following afternoon, May 23, 2011, for the 4-day voyage to Puerto Natales, my first port of call in the famed Patagonia.
(The other highlight was not getting sick from the mystery shellfish soup that I had bought in the market and cooked at the hostel.  It was good and cheap, and had I known about its existence earlier, I probably would’ve subsisted on it during the entire time I was there.)

View Larger Map
This entry was posted in Chile. Bookmark the permalink.