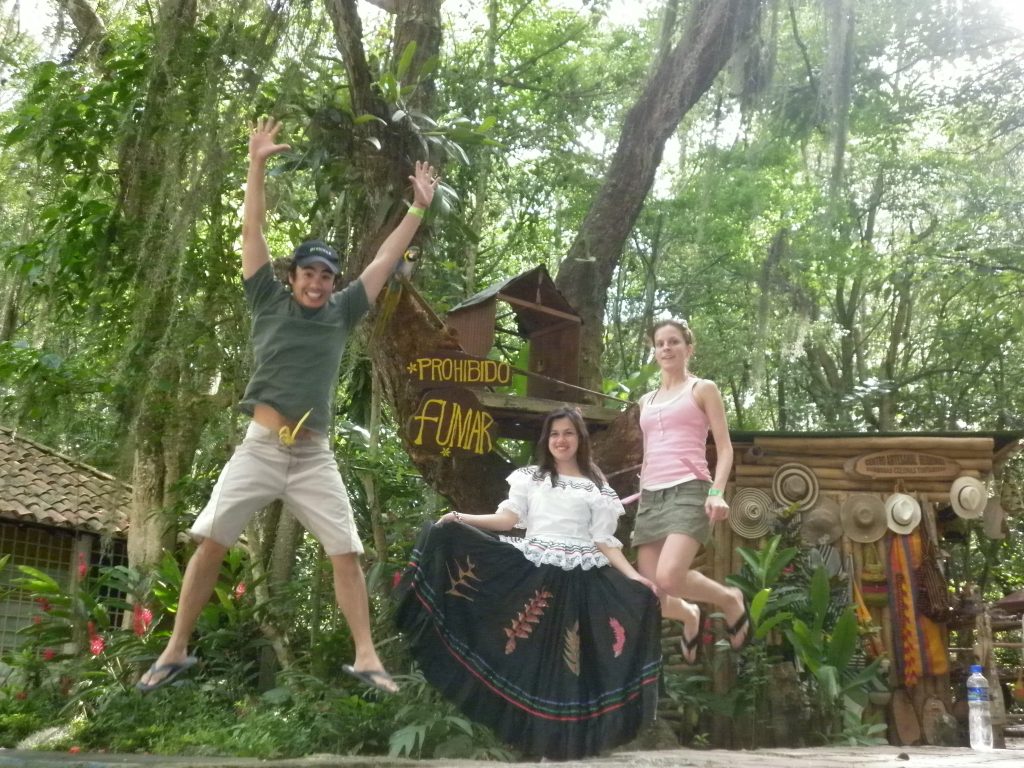 The Parque Gallineral in San Gil

Anna and I missed the last direct bus from Villa de Leiva to San Gil on the afternoon of Aug. 28, 2011.  We told ourselves that “we go where we want when we want” and promptly began looking for alternatives ways to get to San Gil.
We hopped on a bus to Chiquinquira which took us to San Gil.  We arrived very late in the evening and stayed at Sam’s VIP Hostel, right on the plaza.  The next morning we signed up for riverboarding on the Rio Fonce.  Riverboarding was a new experience for both of us.  It entails laying prone on a very thick bodyboard with handles.
During the first 2 or 3 minutes, Anna banged her knee against a rock and was nervous about hitting more rocks during the rest of trip downriver.  All I kept thinking about was to stay behind the guide so that I don’t end up going over the wrong rapids.  I tried my best to do barrel rolls and surf on standing waves as the guide showed us.
One of the better parts of the trip was seeing a large lizard run along the bank.  Suddenly our adventure sport activity became an ecotour.  Unfortunately we don’t have photos of the actual riverboarding, but we did get one of the scrape on Anna’s knee. 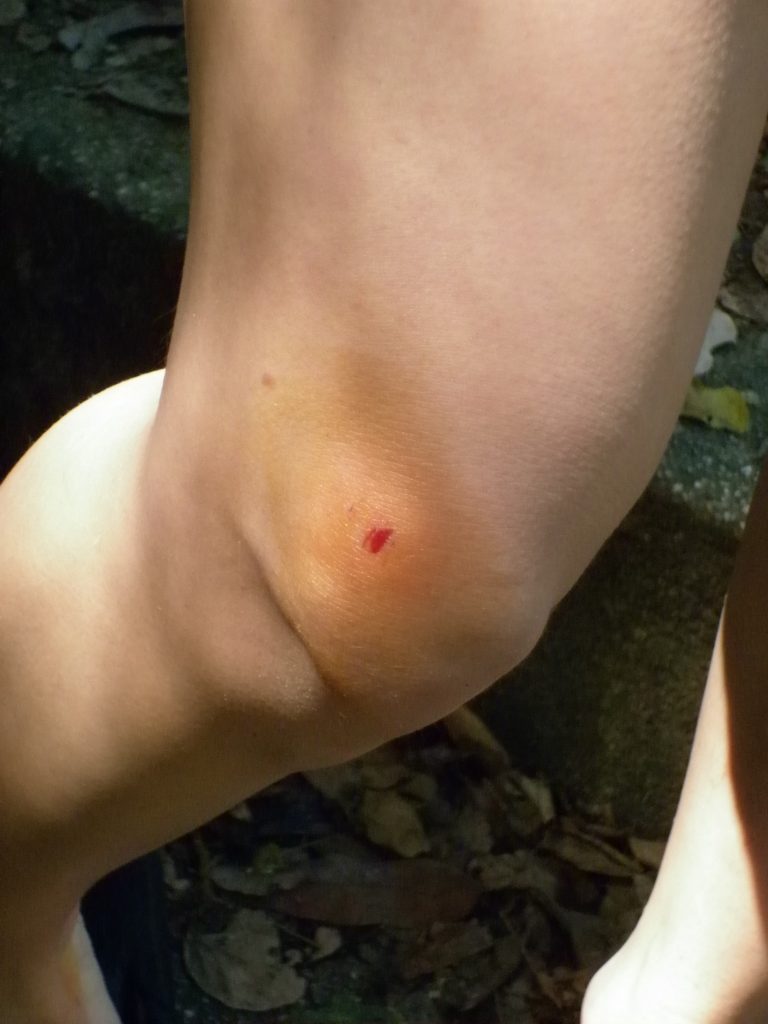 The scrape on Anna's knee

After riverboarding, Anna and I visited the botanical garden at the Parque Gallineral, where I hoped to meet some of the friends I made there last year.  The only one that was there was Gina, one of the tour guides.  She let Anna and I explore the park on our own.  A stray dog decided to accompany us.  I thought it was cool because the dog chose us over all the other tourists.  Anna thought the dog may have been rabid or aggressive, but it was perfectly harmless. 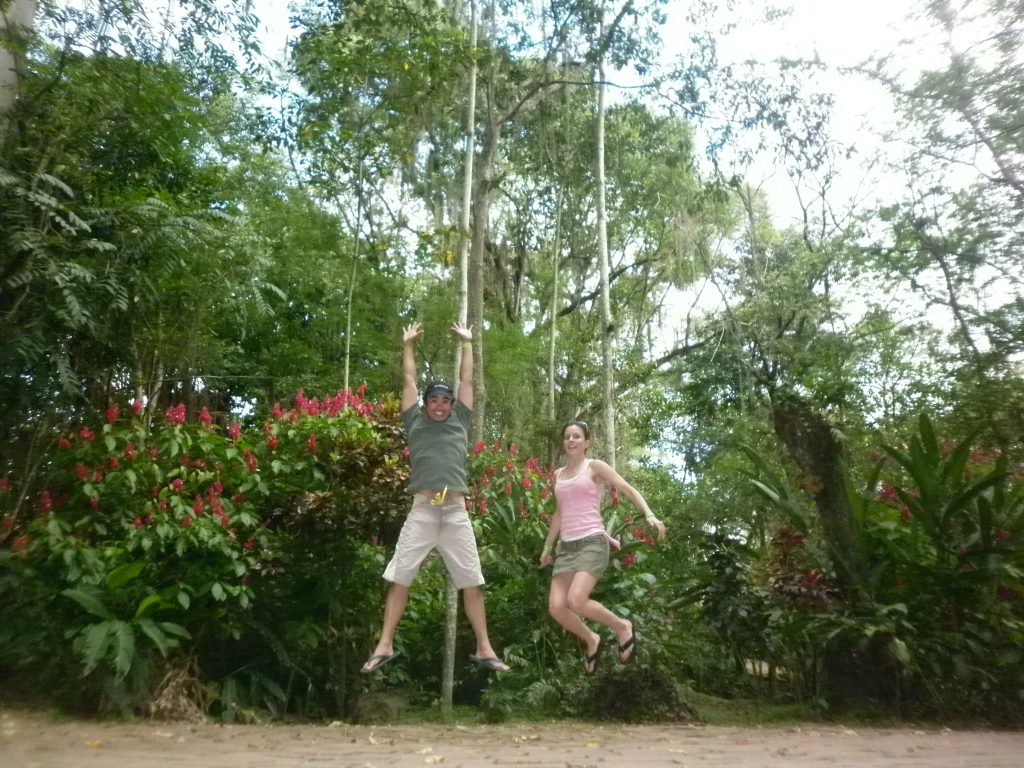 The effort that we put into timing these jumping photos just right guarantee them being published in the blog. This was the 8th try! 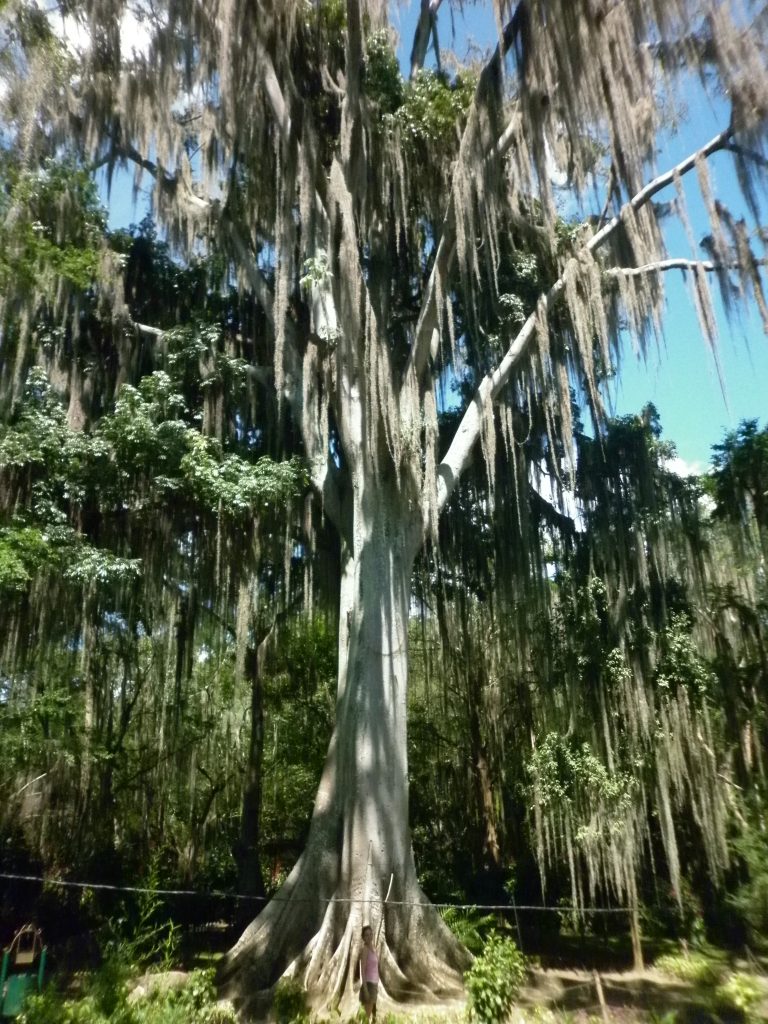 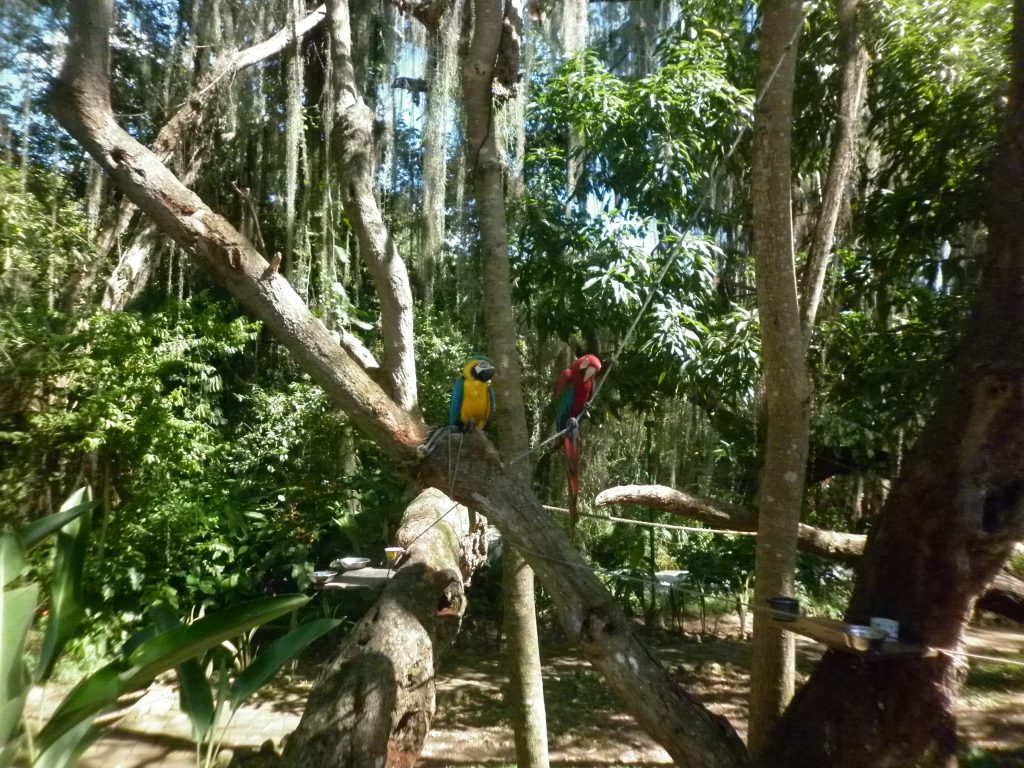 The effort that we put into timing these jumping photos just right guarantee them a spot in the blog. This was the 8th try!

After the Parque Gallineral, Anna and I went for hour-long massages.  While waiting, I bought her hormigas culonas, or ants.  These are a culinary tradition in Santander, the part of Colombia where we were.  I love them.  Anna refused them so I saved some for her to eat later. 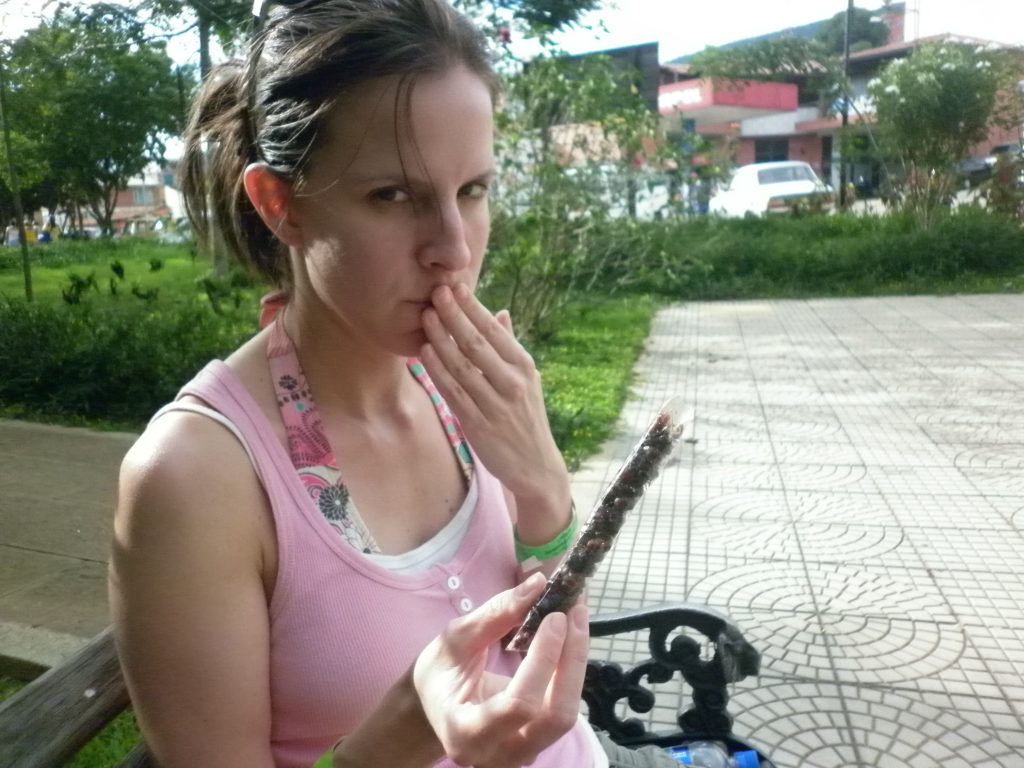 "Guacala!" For Anna, the idea of eating ants reinforced learning the Spanish word for disgust. 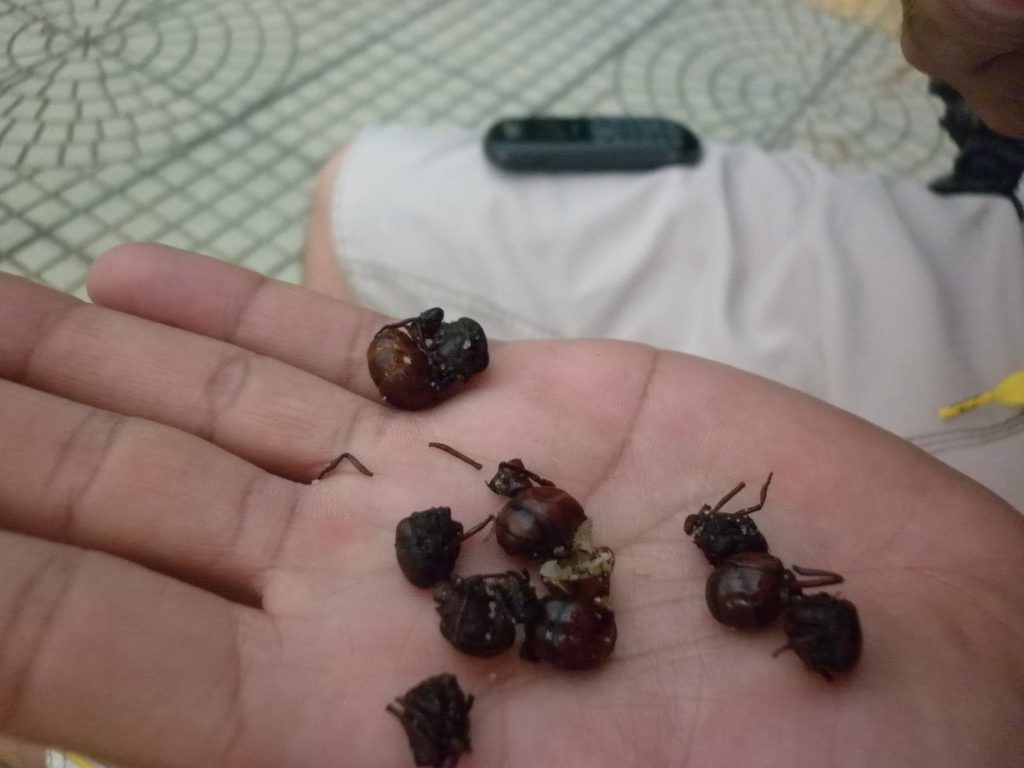 Delicious hormigas culonas. Don't go to San Gil, or anywhere in the department of Santander, without satisfying your hormiga culona fix! 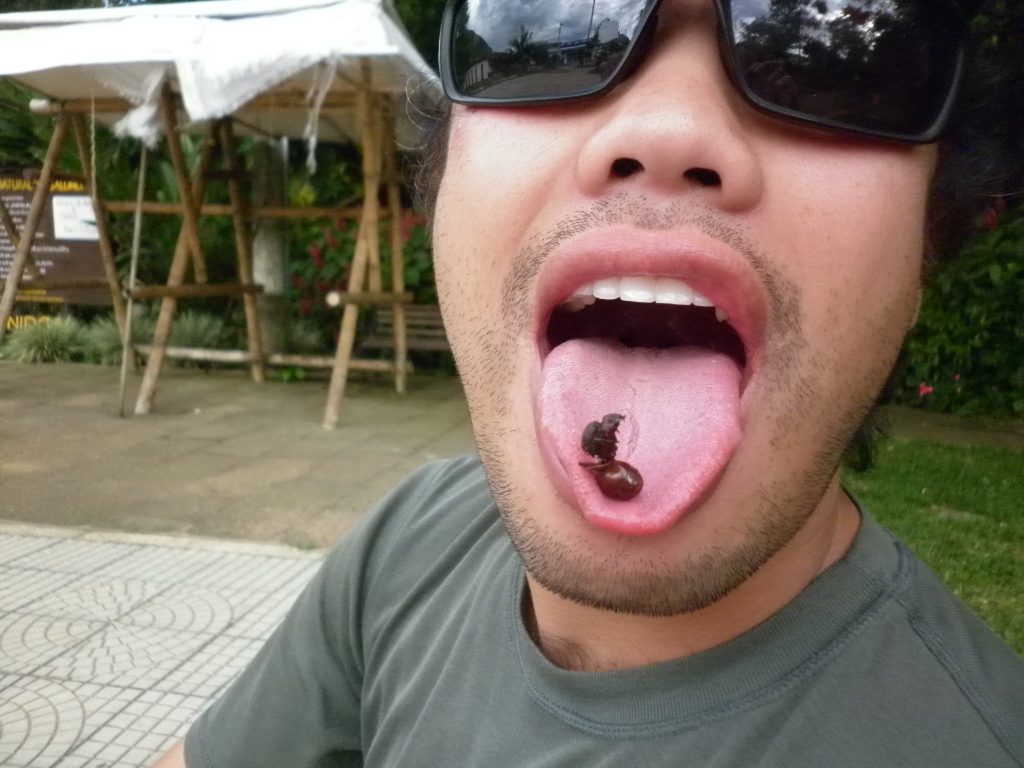 I only wish hormiga culonas were cheaper so I could buy them in bulk. They're salty, like popcorn, but probably much more healthful.

After indulging in our massages, Anna and I met up with my friend Lolita, and we ate at the new sandwich restaurant in town called Gringo Mike’s.  We met the owner and grilled him with questions on how he started his business.
Later we met up with Lolita’s older sister, Zuly, and we went out for ice cream and drinks.  Last year when I met Zuly, I couldn’t have a conversation with her because I didn’t know Spanish.  Still, we always managed to get along well.  This time around, I could actually understand her. 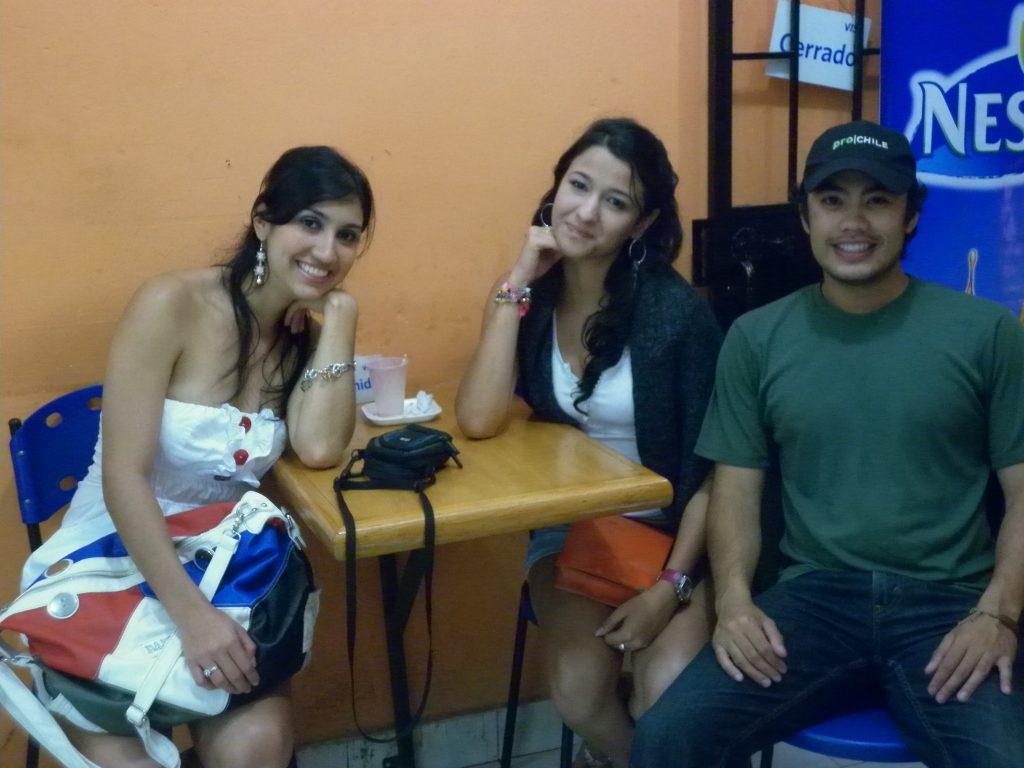 The fabulous Bueno sisters, Zuly and Lolita, and me